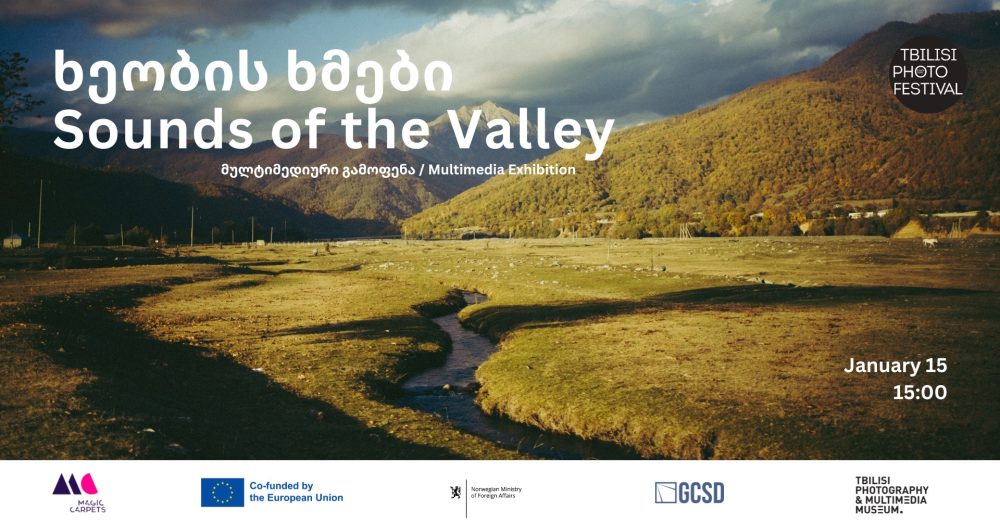 Sounds of the Valley

On Sunday, January 15, Tbilisi Photography & Multimedia Museum will host a multimedia exhibition and live performance “Sounds of the Valley”.
“Sounds of the Valley” is a project initiated by the Tbilisi Photo Festival, it aims to get to know the Pankisi Valley and Kist culture better through a multimedia exhibition of Georgian and international artists, a live performance of Vainakhi music, a testing of Kist cuisine, and photo projects created by Pankisi youth.
“Sounds of the Valley” is the culminating event of the residency program of the same name held in Pankisi Valley in the fall of 2022. Participants in the exhibition:
Diana Tamane (Estonia/Latvia)
Tamar Kalandadze (Georgia)
Ben Wheeler (USA/GEORGIA).
The residency was held within the framework of the European Platform “Magic Carpets”, which is supported by the European Union and annually secures the mobility of artists in European countries.
The exhibition “Sounds of the Valley” also combines the photo projects of young people from Pankisi – Leechi Baghakashvili, Tamar Davitashvili, Mariam Kholagashvili, Hussein Achishvili, Sofiko Marukashvili, Anzor Tsiskarishvili, Magamed Kushanashvili, Ramzana Baghakashvili, Sofia Kholagashvili and Mariam Mutoshvili. These Photo series were created within the framework of the project “Visual Storytelling for the Changes in the Pankisi Valley”, which Tbilisi Photo Festival has been implementing since February 2022 with the financial support of the Georgian Center for Strategy and Development (GSCD).
An important part of the event will be dedicated to the live performance of the Kist women’s group “Pankisi Ensemble”, where Vainakhi and Tush songs will be performed, most of which, until now, have only been preserved orally.
The exhibition lasts one day.
Exhibition opening: January 15, 15:00
Address: Tbilisi Photography & Multimedia Museum M. Kostava 14., Hotel “Stamba”, D block, Second floor.
Image by Tamar Kalandadze