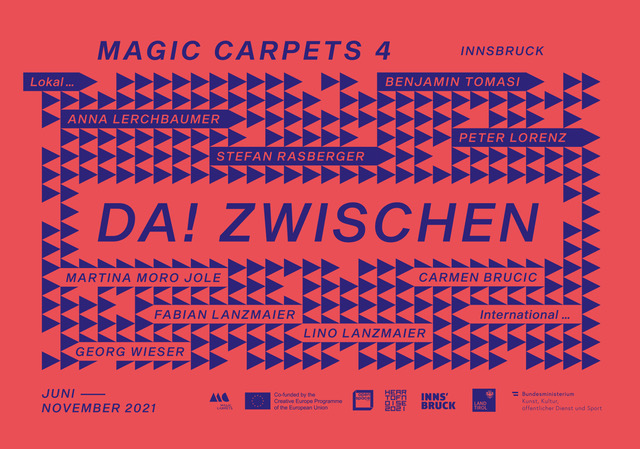 in the light of the current challenges

And still – IN!
IN-volved right here.

In the past years, we have focused several times on notions of the „in-between” in the scope of the Magic Carpets project. We developed programs in between Innsbruck (openspace) and other platform-members in Lithuania, Portugal, the United Kingdom, Georgia, Croatia, Czech Republic, Germany, Italy, Romania, Ukraine, Serbia, France an Latvia. We liaise between local and international artists,  between artists and communities, between different artistic disciplines, as well as between various local, regional and international organisations. Between traditions and the contemporary. Between postponing and cancellations. Between the proposed and the decided. Between the thought and what is voiced. Between spaces and new ways of using them.

Between back then, today and tomorrow.

Between conditions and a plurality of perspectives on them. Between various realities. Between technology, craft and art. Between the local and global challenges of our times.

Between intimacy and the public sphere, your own and those of another, between us and them, me and you – you and you. Between people.

Between moments of silence and thundering noise, closeness and distance. Between hearing and listening. Between looking and seeing!

We are here and IN-volved because we care about what is IN-between!

Artists who are „in-between” are exactly right for us – right where they need to be and they are needed here.

On our way with the flying carpet, we can be found on the streets and in various places between Innsbruck, and Kaunas, Nantes, Schlanders, the island of Hvar and Tiflis. Between Openspcace, Heart of Noise and Basis Space Vinschgau. Between multiple local interventions, processes and the big international closing exhibition where we will finally land (at least for a short while): the „Magic Carpets Landed” exhibition at the opening of Kaunas capital of culture 2022.

Presentation of the artistic work at Heart of Noise Festival