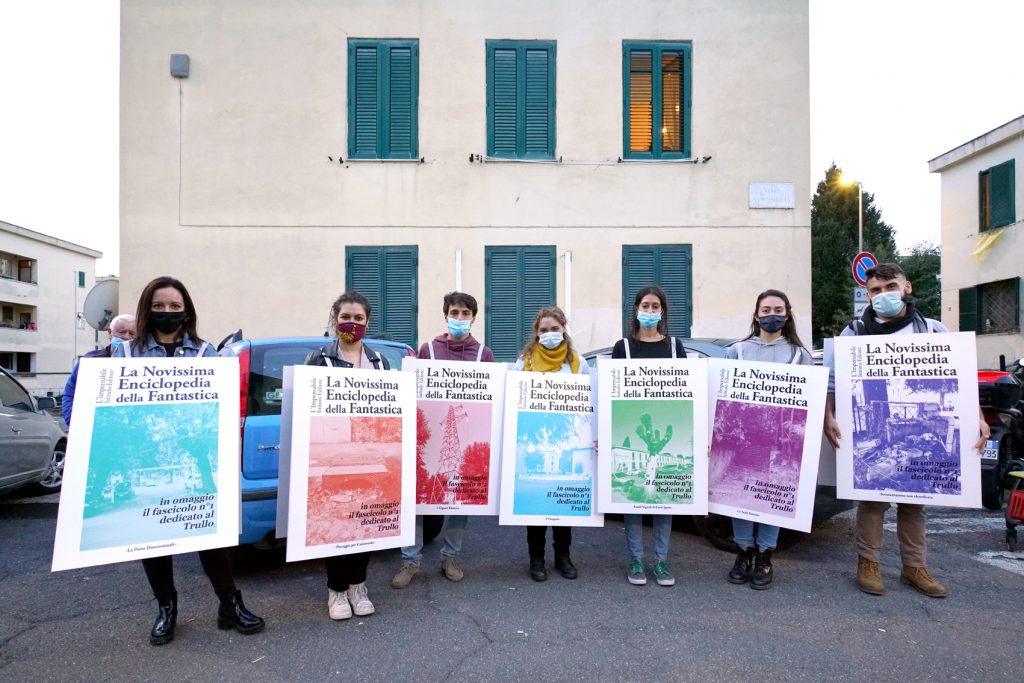 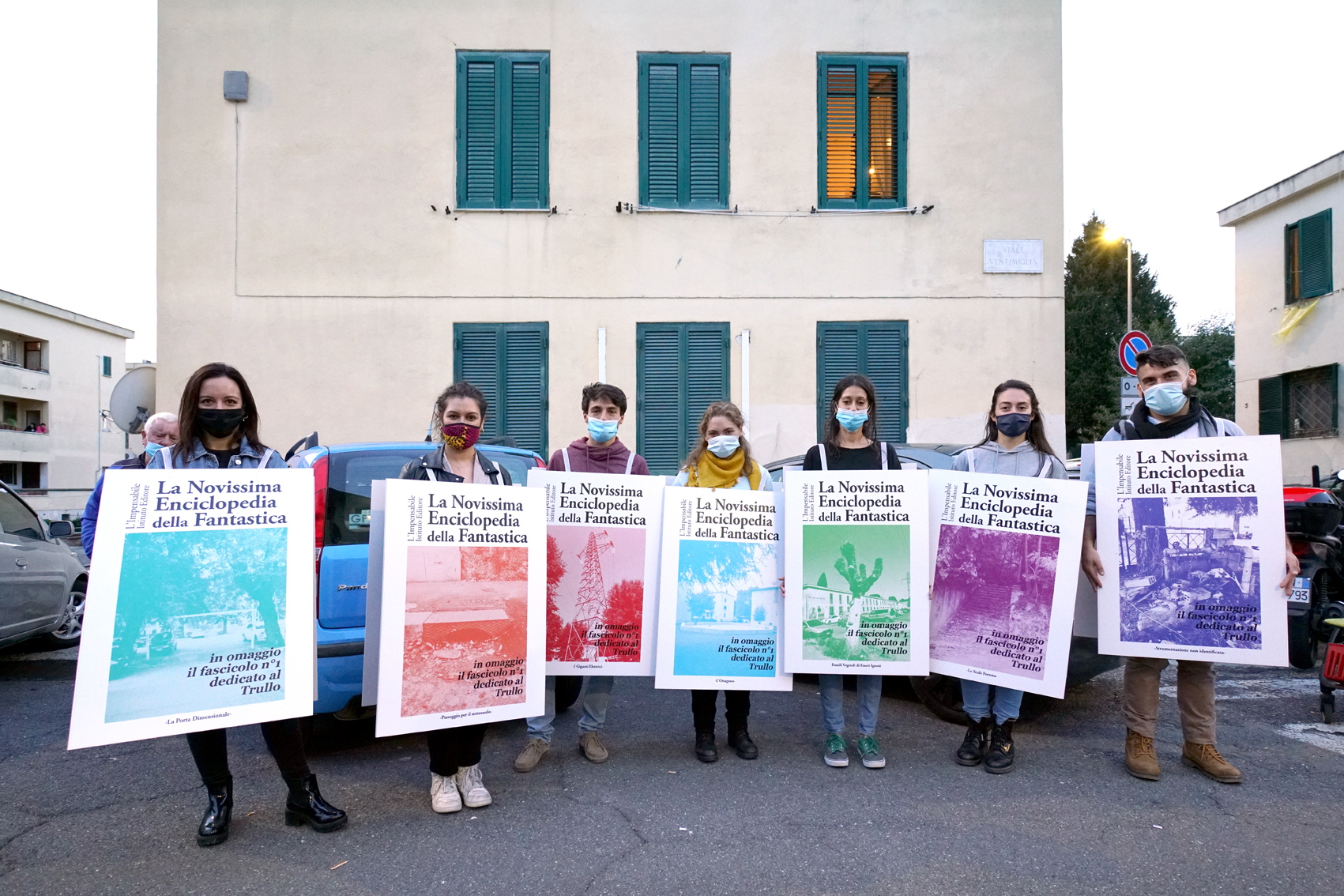 The La Fantastica festival took place from 30th September to 2nd October 2020, the final event of the Magic Carpets project which, for its third edition, was divided into artistic residences and workshops in the urban areas of Rome between the Trullo and the Corviale. Sara Basta, John Cascone and Mykolas Juodele are the artists invited to enrich the proposal of La Fantastica by Benedetta Carpi De Resmini, creator and artistic director of Magic Carpets for Latitudo Art Projects, and of workshops aimed at involving the inhabitants of the two districts, by Giulia Pardini. We reached out to the two curators to get them to tell us more.

The La Fantastica Festival is one part of a broader project that has been going for some time, part of Magic Carpets. Can you briefly explain what it’s all about?

BCDR: For Magic Carpets, a European platform bringing together 15 partners, we’ve been working in Rome, and in the outskirts in particular, for several years. Every year, each partner hosts artists in residence from the platform’s other countries, who come into dialogue with diverse local realities. This year, we worked at the Corviale, as we have for some time, and, especially because 2020 marked the centenary of Gianni Rodari’s birth, we wanted to produce a portrait of this corner of Rome, between via Portuense and the curves of the Tiber, including the Trullo.  “Through the creative process inherent to human nature”, to quote Rodari, “no one is a slave.” In this case, the creativity of artists like John Cascone, Sara Basta and the Lithuanian photographer Mykolas Joudele helped us to rediscover these areas of Rome. The Trullo was a focus of Rodari himself, who wrote “Cake in the Sky” in 1966. In the story, a spaceship, anything but alien, lands on Monte Cucco, and the neighbourhood’s children share it with all the children of Rome. Pier Paolo Pasolini also lingered in these areas of the Roman countryside, where the writer from Casarsa filmed scenes of his famous film, The Hawks and the Sparrows. At the Trullo, they played football: “Fermete, a Pà. dà du carci co’ nnoi!” (“Hey Pasolini, kick the ball around with us!” Partitella al Trullo, 1963). This was the call of the street kids, as they begged the Friulian writer to join their improvised football matches on the dusty fields of the Roman periphery.

So with three artists, each very different from the next, we set out to discover these places, already well travelled in the not too distant past, and we carved out new stories and new adventures with them, with the images and stories of Rodari and Pasolini always in the background.”

What will you take away from this experience of working with other European realities? Do you think we are in line with the other associations, or is there still work to be done in Italy? I imagine there was a lively exchange of opinions between you.

BCDR: Working in close contact with other realities is always a form of knowledge. Not only do we enter into contact with different cultures and customs, but we establish relationships of interconnection that lead us to rethink cultural projects with a broader scope. We end up creating a common space: where, starting from individual local roots, ideas and opinions are exchanged, creating a real intercultural platform. Latitudo Art Projects, despite being a smaller organization than the other partners, if we consider Eva International or the Kaunas Biennale, can be satisfied with what it’s done so far. I believe that interesting transformations can emerge from associations or realities with “flexible” legal structures, in response to, and in line with, changes in the related socio-cultural context.

Often, the various private entities have features linked to the community that respond to the demands of a multifaceted country like Italy. Characteristics linked to localization are a key element to connect the local to an international dimension, leading to an effect of opening and exchange with different realities; plus, we can’t forget the role that many realities play indirectly, in terms of re-functionalizing abandoned heritage or urban and extra-urban regeneration, creating a strong link of identity between the organization and the local context it works in.

The projects you’ve created had you working in areas of the capital often considered marginal – places where culture and contemporary art have trouble entering into people’s hearts, and yet where these things would be really beneficial. How did the residents of these neighbourhoods relate with you, what kind of response did you have?

GP: Working in places where contemporary art is perceived as something very distant, almost like a foreign world, is highly stimulating, because it actively puts us in play to present our projects. It helps us demonstrate that this part of culture influences our everyday lives and shouldn’t be perceived as something distant and inaccessible. Arousing curiosity in people is the first step, because they feel engaged and then choose to participate, as spectators and above all as protagonists of the creative process. The artists, still hosted for the Magic Carpets residences and with whom we collaborated on the projects, were always friendly and willing, ready to get involved and break down language barriers, which could have been an obstacle separating them from the people. Instead, they encouraged them to open up and participate in our activities. We thought of this year’s project almost a year ago. When the lockdown happened and we found ourselves stuck in a completely unusual situation, we were afraid we would raise our emotional barriers for fear of coming into contact with others. It was not the case – quite the contrary. Sara Basta’s embroidery workshops and John Cascone’s writing workshops – which took place at the Palestra Popolare Baccelli thanks to the Cooperative SCUSATE IL RITARDO – had many enthusiastic participants. We felt a sensation of rebirth and the desire to be together and to share. We had the same feeling with Mykolas Juodele, the Lithuanian photographer, with whom we developed a photographic project at the Corviale inspired by “Street Kids” by Pier Paolo Pasolini. In this neighbourhood, we went looking for subjects to photograph and met with and got to know very young people who wanted to talk and open up to us. Seeing the participation of a large crowd of residents of the Trullo neighbourhood and some of the young people from the Corviale in the final event of La Fantastica filled us with joy. It showed us that we managed to leave them with something extremely positive – the thought that contemporary art is not at all detached from our everyday lives but is instead created through the daily experiences of all of us.

We are in the third year. Let’s take stock of the situation. Has it been worth it? What would you do again and what have you found could have been resolved differently?

GP: Having the opportunity and fortune of working for a European platform, coming into contact with foreign organizations and artists has certainly been personally and professionally formative for everyone. Being active locally allowed us to put ourselves to the test with workshops and events aimed at children, the elderly and, in general, communities that often remain on the outside. This stimulated us to be more geared toward these people and to do more and more, adapting our ideas each time. It has been worth it, because meeting people and artists undoubtedly enriches us and shows us how we can operate in the future and how to behave with those we want to engage. A strength of ours, which has increased each year, has been being able to collaborate with artists who have already worked with social issues, so they’ve been able to interact with every kind of community we’ve asked them to engage in the project. This third year saw the inclusion of two Italian artists, based in Rome – Sara Basta and John Cascone – who established an excellent personal and professional relationship with workshop participants and undoubtedly helped us in the organization of the entire project. The invitation to local artists was introduced this year and, given the extremely positive results so far, we hope it can happen again for the fourth year of the project.