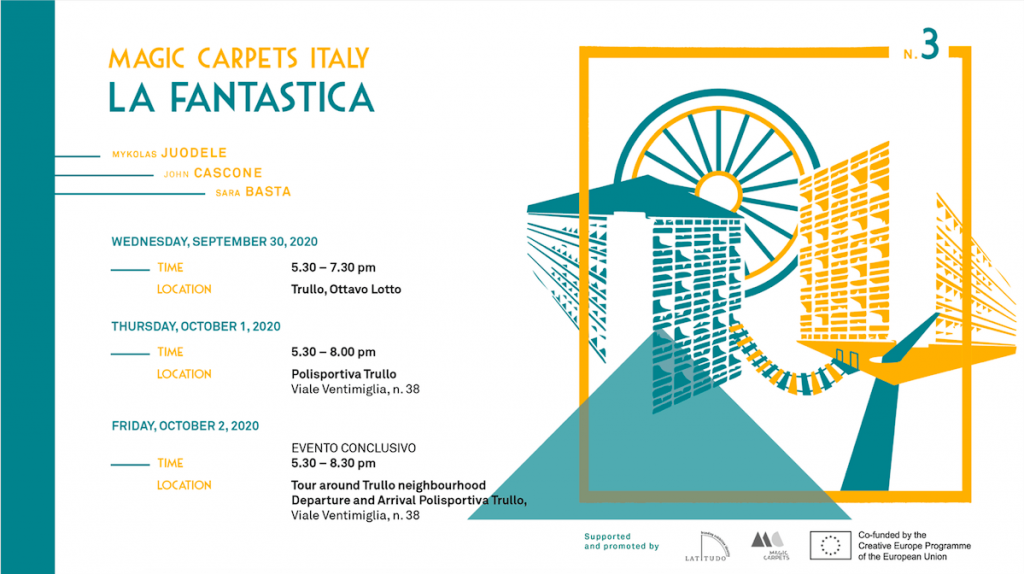 The festival La Fantastica, the event of the third year of Magic Carpets with the Latitudo – Art Projects, will take place from 30 September to 2 October 2020 in the urban areas of the Trullo and the Corviale.

Workshops and performaces will be presented at Polisportiva Trullo.
The Festival will end on Friday with a collective walk down Trullo’s streets discovering Sara Basta’s artworks, with the female coir Brancoro – here the map. During the path, you’ll meet the “Spore”, the second part of Metamorfica, the artwork by John Cascone that will end at Polisportiva Trllo with a performance and a videoinstallation.
After, the photo installation by Mykolas Juodele made during his research in th neighbourhood Corviale will be presented.

The inspiration for this third edition came from two important novels focusing mainly on young people and, in very different ways, on abandoned and still-innocent urban outskirts and their transformation: The Street Kids by Pier Paolo Pasolini and The Cake in the Sky by Gianni Rodari. The latter was set righ there in the Trullo, where the great children’s author lands a cake-shaped spaceship, then discovered by the children and residents of the neighbourhood, creating a short-circuit between reality and fiction. This methodology of Gianni Rodari, who urges us in his works to experiment and even make mistakes, all through the invention of new stories, becomes the common theme of the project.

The residents of the Trullo and the Corviale – children, teenagers and the elderly, especially–worked in close contact with the artists, while respecting the conditions of our current health crisis. The goal: to bring out individual and collective creativity by producing new images and new stories to reflect the real experience of their neighbourhoods and imagine new forms of coexistence.

An idea from Benedetta Carpi De Resmini, creatorand Artistic Director of Magic Carpets for Latitudo Art Projects, and workshops with the residents of the two neighbourhoods, curated by Giulia Pardini.