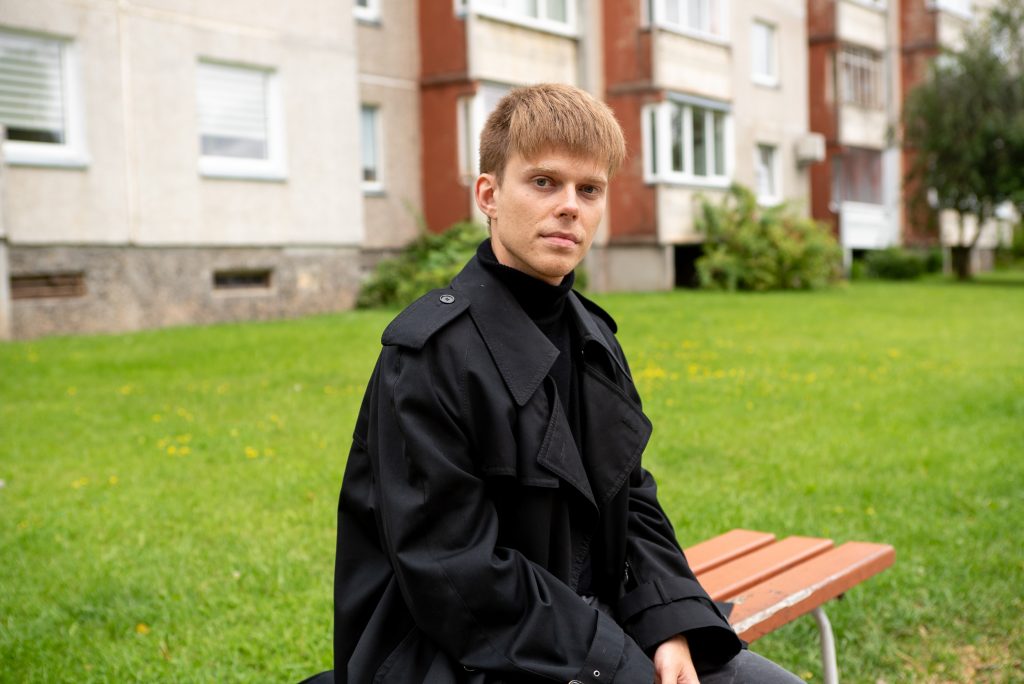 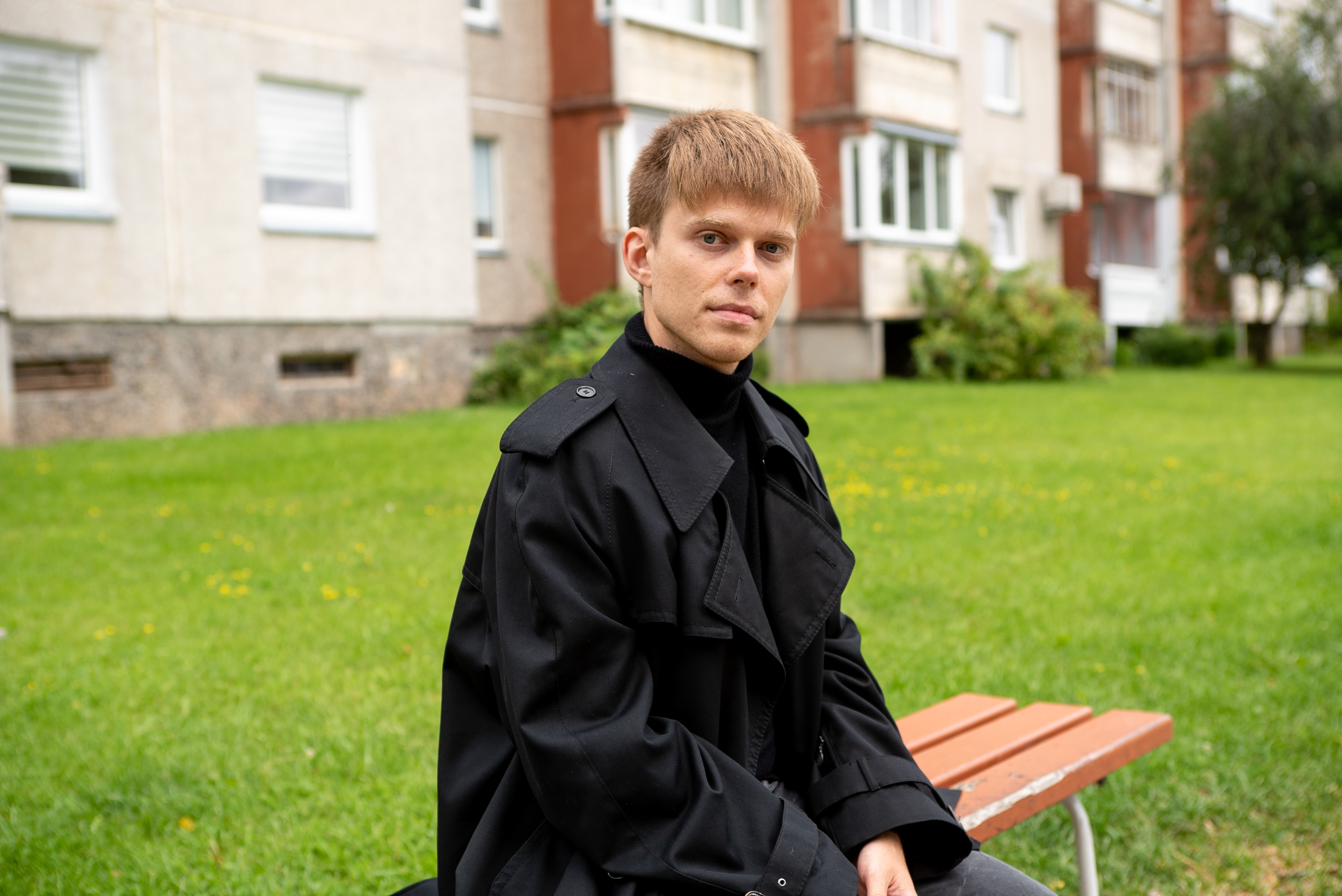 I graduated from theatre and film acting BA studies at Vytautas Magnus University (Kaunas, Lithuania) and I have a certificate of public communications studies as my minor studies here as well.

This year, 2022, I graduated from alternative and devised theatre directing MA in Academy of Performing Arts in Prague (Czech Republic).

During all these years, my focus and interest was switching from theatre acting to theatre directing, film acting, movement, film directing, performance as well as visual arts… and I still feel that all the knowledge and the experience I have been collecting (and still am) is broadening my perspective and is complementing each other.

In 2022 my work “//////O” was presented in Lumbung Lounge installation, a project by Guerilla Architects and Along the Lines, at the Stellwerk Galerie, in Kulturbahnhof, Kassel (Germany) in parallel to Documenta fifteen.

The same year, the documentation of my solo, live-streaming performance “ROOM IN 286/75” was presented in the Baltic art exhibition “Volume UP” in NYC (USA) and selected poems were published in Munich cultural magazine “Turtle”.

I am seeing myself as a continuously changing, growing and learning human being. My artistic work appears somewhere in between visual arts, performance, installation, theatre and film. I think that one of the most important aspects of art and creation is playing. Thus, I keep on playing on the political, social and personal levels.

Why are you a part of MagiC Carpets: We won a project in 2020 and started working under the name of MagiC Carpets, which is a great honour. I am proud and happy that Kaunas participates in this platform, which brings interesting and new contemporary artists to the city

This project was organised by ROOTS&ROUTES Cologne in 2018 and as you can see from the name, it focused on Queer people rights and visibility, which, in my opinion, is a very important topic in the world today and for me personally. In this project, I made three performances that were presented in Cologne and later on streamed online.

It is my first solo work that connects visual arts, camera and performance. It was made as an entrance video to Alternative theatre directing studies in Academy of Performing Arts in Prague.

Due to the COVID-19 pandemic situation, PULSE was transferred from its originally physical space to a digital reality. PULSE is presented as a sensory, cinematic experience crossing various artistic disciplines. It reflects on male and female’s sexual assault, but keeps its focus on healing, care, trust, belonging and the lack of it.
DISK theatre production (Czech Republic), created in 2021.

Fragmented Realities is a theatre performance, specially made for ZOOM platform and three performers. It is researching and reflecting on fragmentation of reality that we are living in now. Where are we, when we open our phone to check our social media, weather, or email? Could we be in both realities? How do we understand a reality today and how does it change when we are sharing it on ZOOM?

These and other related questions were crossed during the creative process and are there in the performance, which is crossing perception, performing and not performing for a camera, fear, hate, death and dream topics.

At some point in our lives we need to decide where to draw the line in between “my past self” and “present self”. It doesn’t necessarily mean that the past stops existing, but it is more like a preparation or a suggestion to not to focus on what has happened, but to look at what is it now and where is it going. “One Dream Is Over (ODIO) In transition” – It is a hybrid  performance, which is drawing a line from the time before to the time after. In the performance, we are using documentary material found in the past two years (during the pandemic), mixing them with the audio confessions, minimal, ambient tones and the presence of digital and physical bodies. Performance is focusing on the state of liminality— a state of transition between one stage and the next and audience is invited not only to see the performance, but also to tune with themselves in this present moment.

Created and performed together with the Japanese artist Sai Sai.

We have been working with people who live in Šilainiai area. We invited them to share their own poetry with us and record it in the studio. As a result, we had two recordings – one was made by actress Edita Niciūtė and myself, and another one – authentic one – recorded by people who wrote poetry. I need to say it is really touching. There is a lot of care and love in it.
As a final event, we organised the reading of their poetry, which took place specifically within the area of Šilainiai park. We read their poetry, and they were reading their own poetry. It was this nice, warm exchange.
It made me think about this big gap that still exists between the professional and amateur artists worlds.

What inspires you as an artist? Life. Generally speaking. We can make performances out of anything. When you start focusing on its visual side, texture, sound, weight, movement, etc. everything is saying something and giving different information. You just need to know how to collect it and make it work.
In this period of my life (2020) – physics, science, emotions and electronic music.

What do you think is the purpose of art? I feel that in this time, the purpose of art is shifting. It is also shifting for me and I am still searching for the answer. But being here and now I could say – ground and uplift; educate (meaning give some new knowledge); suggest a new perspective; and propose a shelter and operate as energy exchanging mechanism

Your favourite book(s): Antoine de Saint-Exupéry “The Little Prince”;
Poetry books; There was a time I was reading a lot of Alessandro Baricco, Haruki Murakami. His novel “After Dark” is still one of the most vivid in my head. Now I am reading “The Body Keeps the Score: Brain, Mind, and Body in the Healing of Trauma” by Bessel van der Kolk, and “Overstory” by Richard Powers.

Your favourite film(s): There was a time, when I really enjoyed the works of Cristopher Nolan and Yorgos Lanthimos. Now I am following Gaspar Noé, Quentin Dupieux (if anyone is reading this – I think “Reality” is worth watching) and I am focusing now on more experimental or / and poetic films.