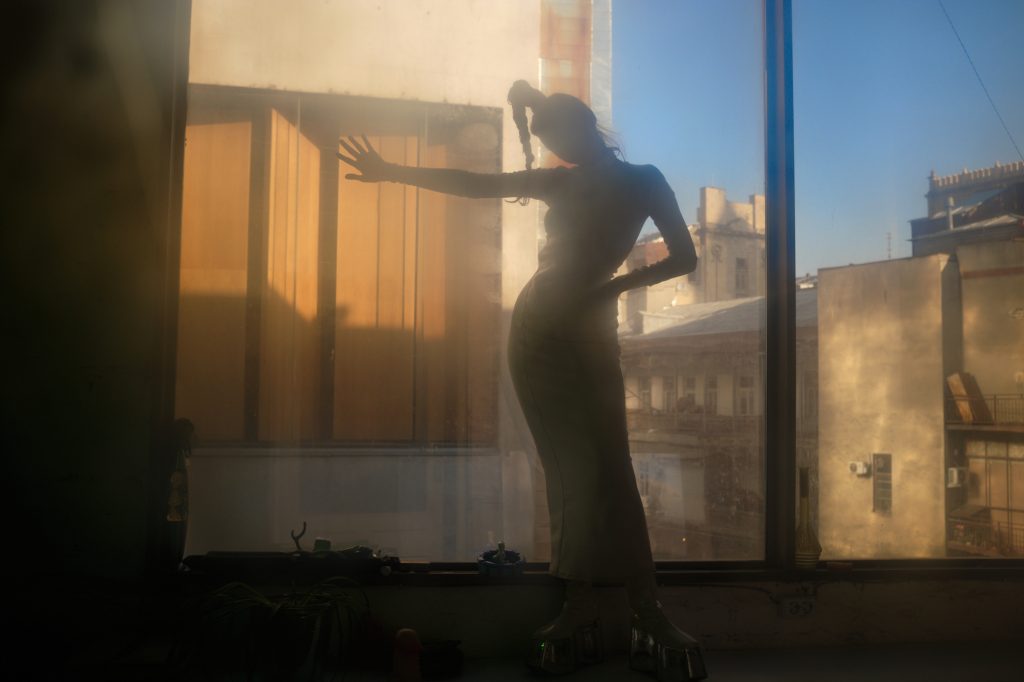 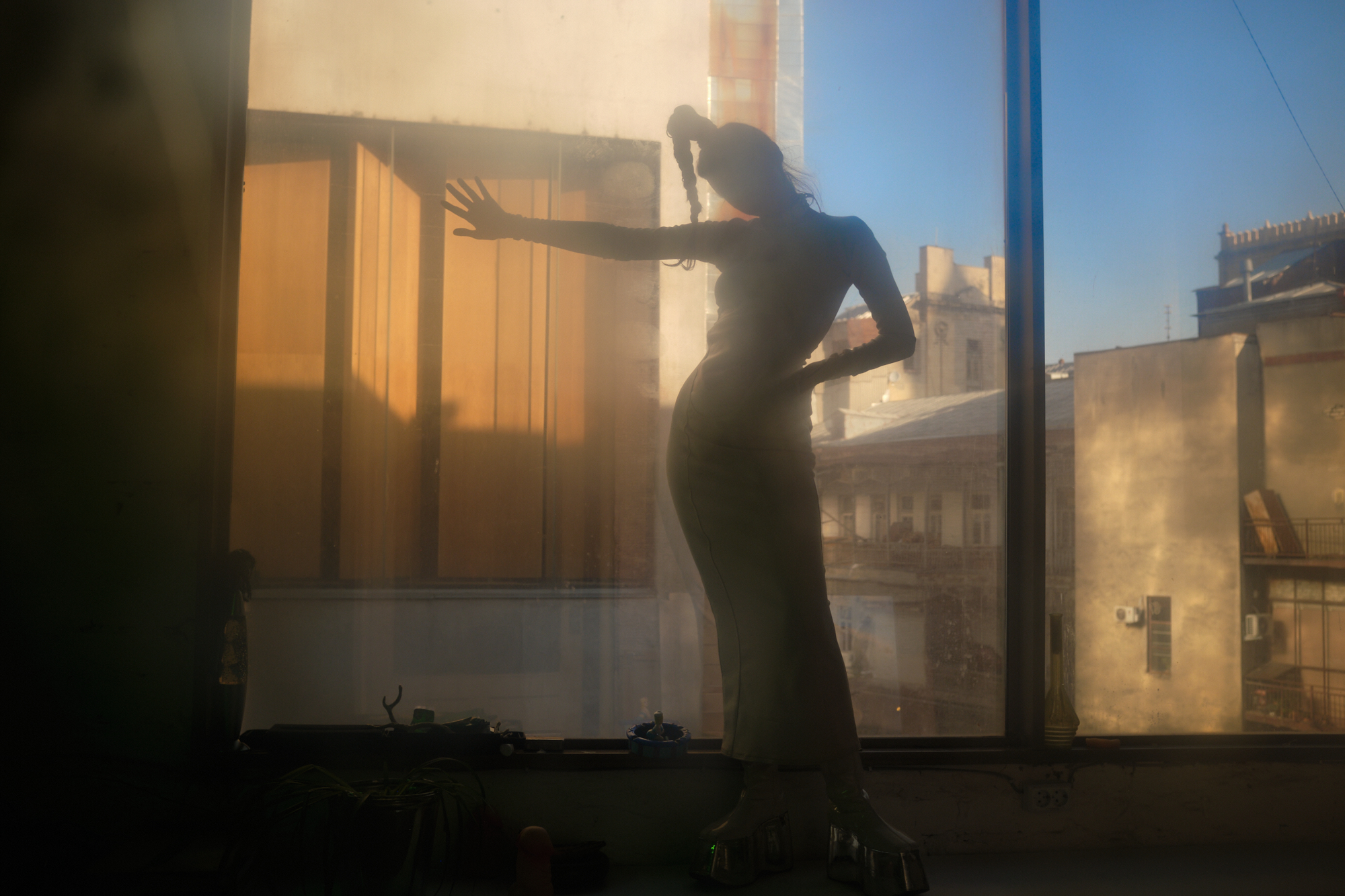 As part of the Creative Europe Platform MagiC Carpets, Austrian artist Carmen Brucic spent a residency period at Tbilisi Photo Festival in 2021. During her stay in Tbilisi, Brucic began a collaboration with five local artists and activists who are fighting for justice, freedom and democracy around the well-known Bassiani nightclub in the Georgian capital. Since then Carmen has continued to develop this project with great dedication.
The results of this collaboration will now for the first time, between May and July 2022, with the support of various Tyrolean art and cultural institutions, be shown at different locations in the city of Innsbruck! Initiated by our members Openspace.innsbruck

Next to Carmen Brucic’s exhibition Private Stages – Public Selves at Glas Kubus (Reich für die Insel), contributions can, in personal presence of the Georgian artists, be experienced at the International Film Festival Innsbruck (IFFI) and the Heart of Noise Festival. The diverse program of activities will be complemented by a space for exchange and encounters through moderated artist talks.
Carmen Brucic  lives and works in Austria at the interface of art and science. She focuses on themes related to emotional relationships, vulnerability and fragility. Her intimate perspective allows her to reveal important but delicate issues of society. Her artwork emerges from the interplay between the fine arts, theatre and photography. 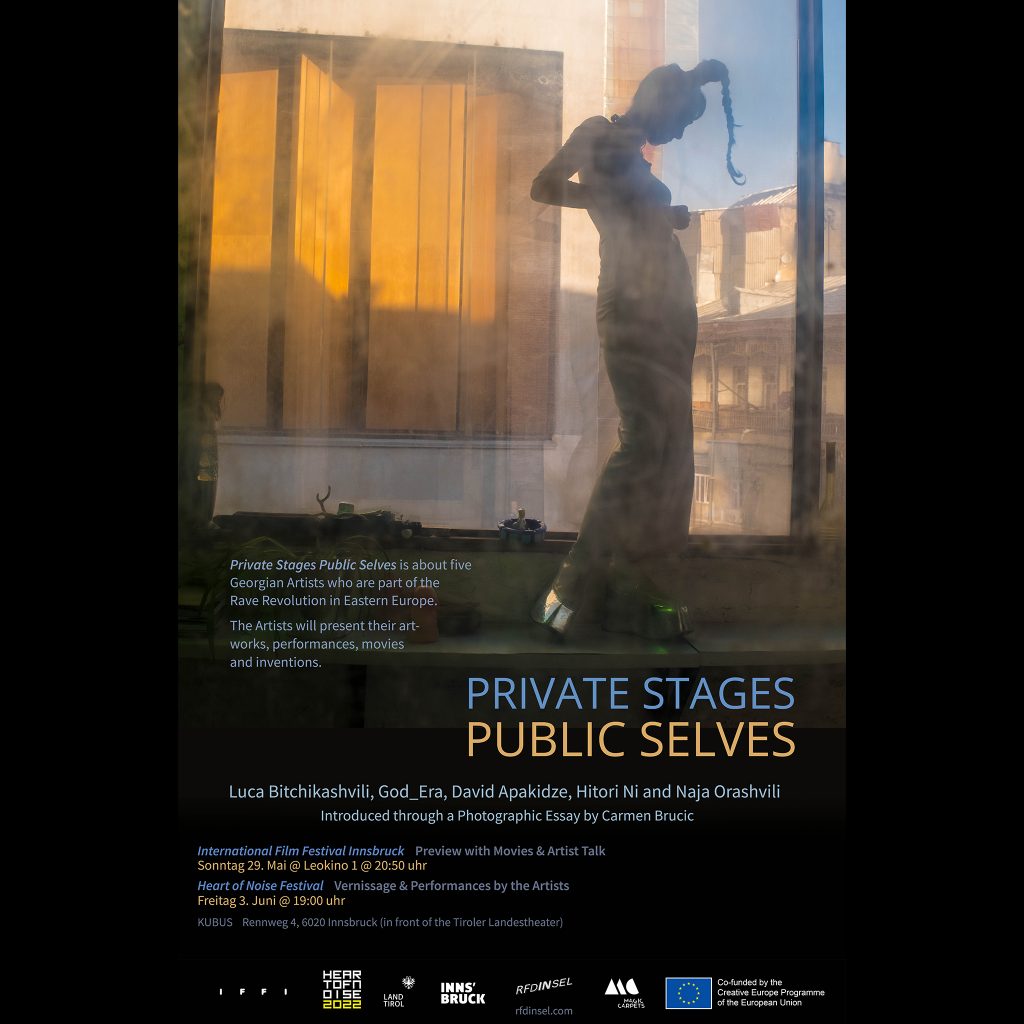 The detailed program of PRIVATE STAGES – PUBLIC SELVES:
Sunday, 29 May, 8.50 pm at IFFI/ films / artist talk
Screening Private Stages by Carmen Brucic
Documentary Dance or Die by Naja Orashvili about the background of the Rave Revolution at the Iffi Film Festival
Followed by an artist talk with Naja Orashvili and Carmen Brucic  Moderation: Rosanna Dematté
Friday, 3 June, 7 pm / Opening / Exhibition / Live Performance / Party
Opening of the exhibition Private Stages – Public Selves in Reich für die Insel @RFDInsel in front of the Landestheater Innsbruck.  Present are: Nino Goderidze/ God_Era, Naja Orashvili, David Apakidze, Luca Bitchikashvili/ Lucrezia, Omar Gogichaishvili/ Hitori Ni and Carmen Brucic.  Admission free  3-6 June exhibition, performances, films, talks at Heart of Noise Festival
Duration of the exhibition at Reich für die Insel:  22 June to 30 July.  Wed – Sat from 12 – 6pm
In cooperation with the Glas Kubus (Reich für die Insel), the Heart of Noise Festival, International Film Festival Innsbruck (IFFI), and the European creative platform Magic Carpets, the Georgian artists and activists Nino Goderidze/ God_Era, Naja Orashvili, David Apakidze, Luca Bitchikashvili/ Lucrezia, Omar Gogichaishvili/ Hitori Ni from Tbilisi have been invited to Innsbruck.
Sculptures, paintings, animations, inventions, films, photos and live performances will be shown.
The filmic-photographic portrait Private Stages from the Austrian artist Carmen Brucic, made last summer in Tibilisi, introduces the Georgian artists. This portrait with sound by Herbert Pixner will be shown at the Leo cinema on 29 May, and a selection of the portraits will be shown in the exhibition.
About Georgian artists:
The five Georgian artists have already experienced a lot in their young years, they have breathed the air of war, all of them witnessed the Caucasian war ten years ago, they know well the current war situation in the neighbouring country Ukraine, they know exhaustion and fatigue, and they know how to keep the courage, to enjoy the beauty of life and to preserve artistic and creative energy in dark times.
The well-known Georgian filmmaker and activist Naja Orashvili is co-founder of the notorious Bassiani nightclub in Tbilisi, whose dance floors are always political. Fuelled by religious propaganda, violent attacks on the LGBQT+ community occur frequently, as the club pursues the unifying vision of an open and free world in a conservative and homophobic society. We dance together, we fight together is the battle cry of the dancing youth revolt Rave Revolution, which campaigns for more justice, freedom and democracy and the possibility to be and live as everyone wants. Naja Orashvili tells the story of the rave revolution in her film Dance or Die.
Many photographers have tried to capture the Bassiani myth, but no one has been allowed to – except one: Omar Gogichaishvili/ Hitori Ni. With his videos and photos, the photographer and performance artist gives an insight into this mysterious place for the first time and has created a performance especially for the opening of the Heart of Noise Festival.
Nino Goderidze/ God_Era is Georgia’s youngest and internationally best-known fashion artist. Her creations are dystopian-cynical-poetic visions of the future.  For the exhibition, she created an anti-war sculpture made of vegan, organically regrowing leather. This material is the result of three years of research, and is being presented outside Georgia for the first time.
David Apakidze is half Ukrainian, half Georgian, his family lives in Kiev. He shows a video animation in which he deals with being queer and enduring state-supported homophobia in his country.
Luca Bitchikashvilli/ Lucrezia, a painter, model and performance artist, shows a performance about fear. Starting from a Georgian women’s war dance, he translates this expression into his private space in Tbilisi and now into the exhibition in Innsbruck. He also presents his anti-war posters and drawings.