‘Everyday life and people that I meet have a strongest impact on me and my art’
Jun 29, 2019 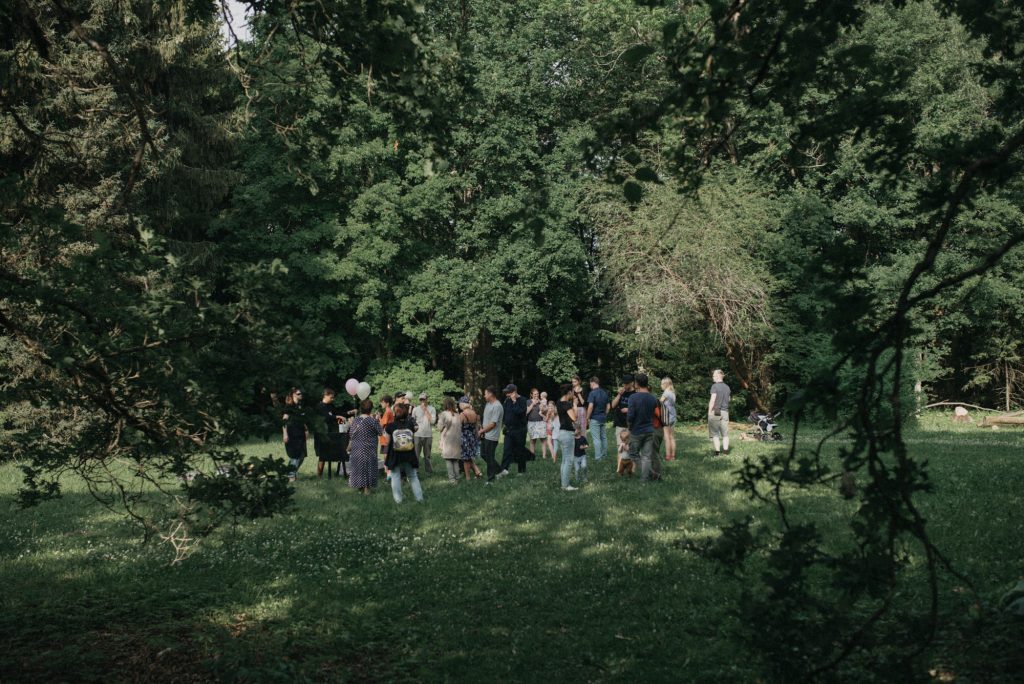 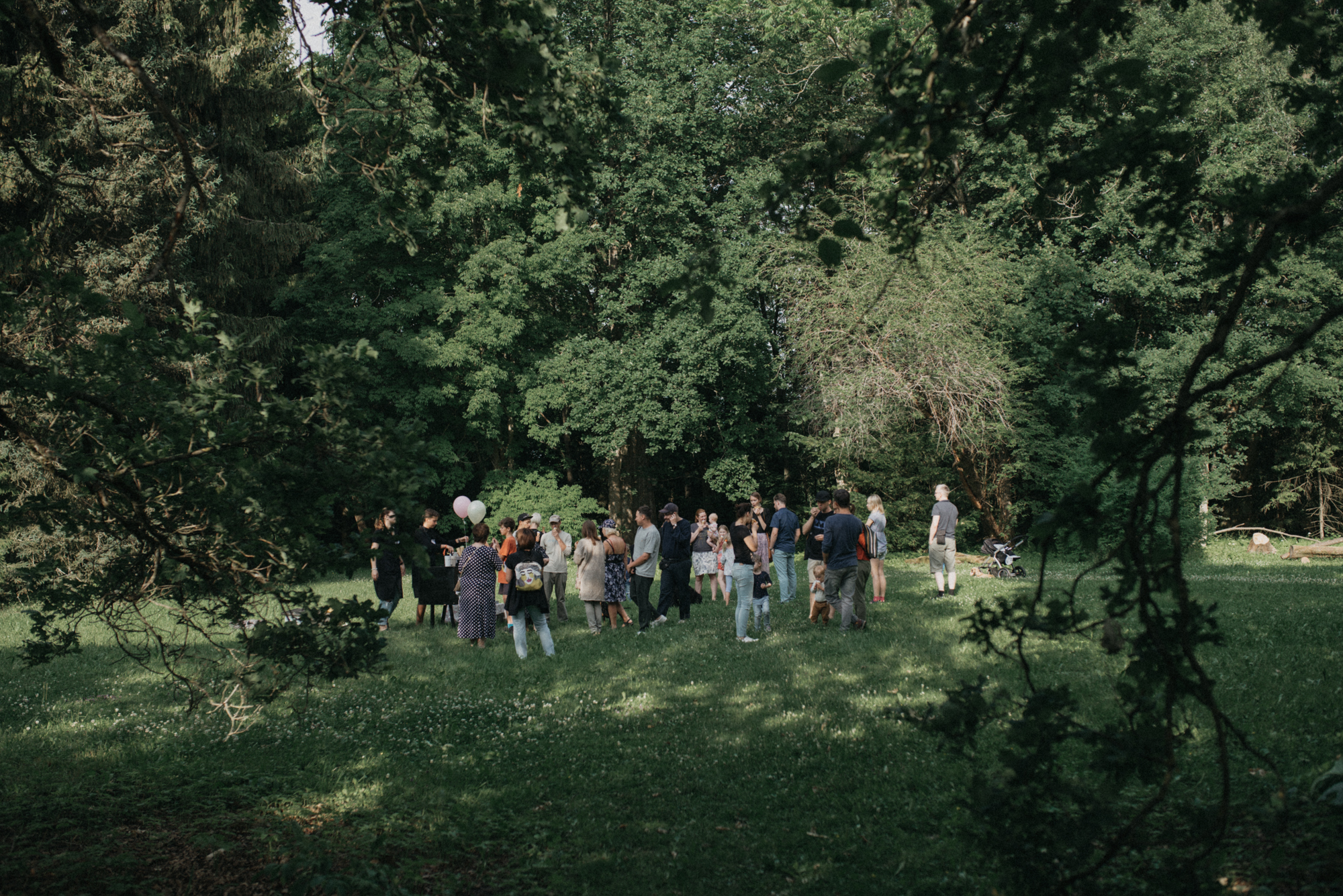 Croatian artist Ana Kovačić is one of the residents of the “Magic Carpets” project. As part of the 12th Kaunas Biennial “AFTER LEAVING | BEFORE ARRIVING”, the artist is presenting a project about a well-known Lithuanian zoologist Tadas Ivanauskas. The project consists of three parts and is spread across different sites in the city: Kaunas Bus Station, Tadas Ivanauskas Zoology Museum and Obelynė’s Park. “Migrating Species – Reflections on Moving” show links between the migratory habits of birds and people. In the interview, the artist shares thoughts on artistic practice, her residency in Lithuania and the multilayered project at this year’s Kaunas Biennial. 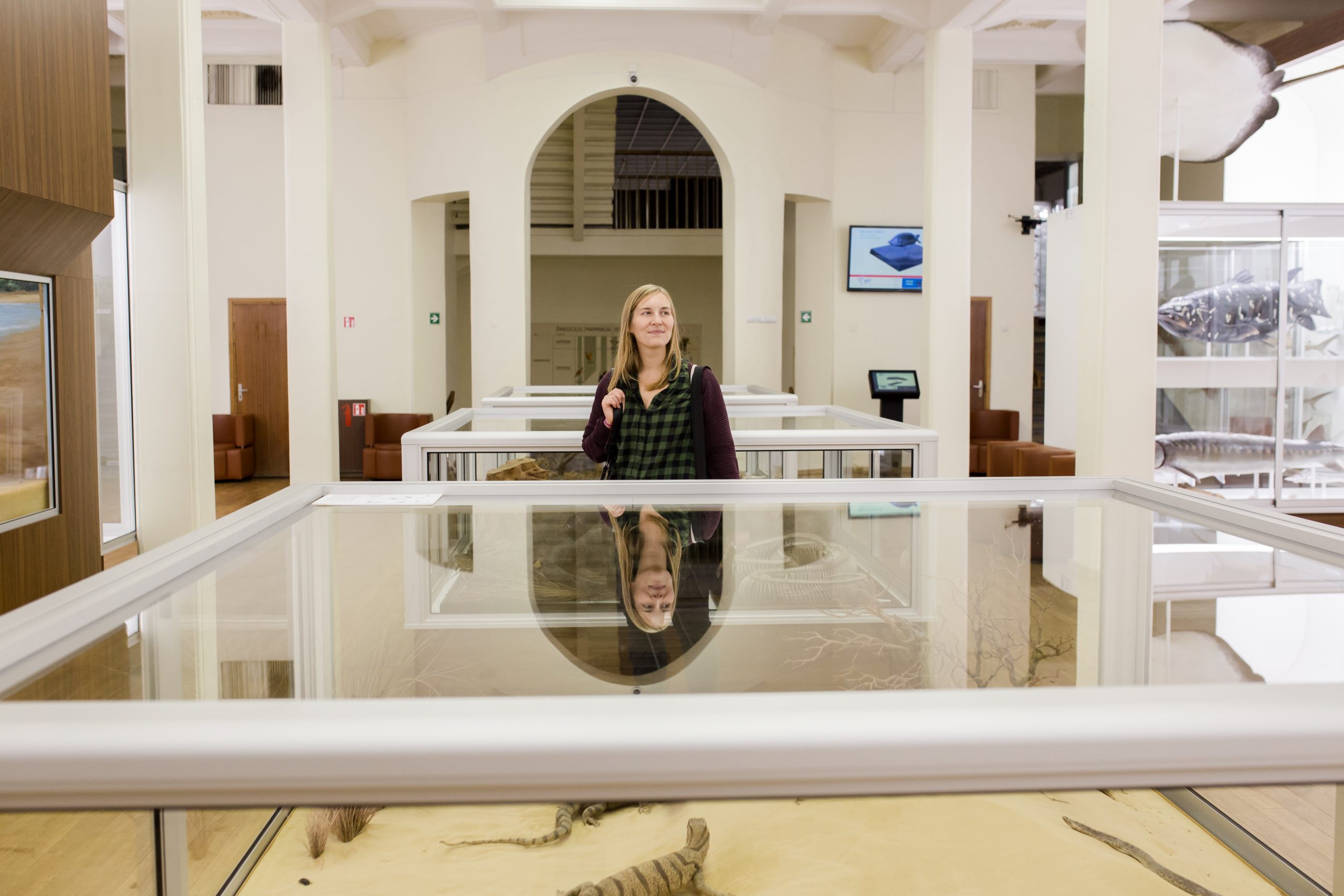 Could you introduce yourself? Who you are and what do you do?

My name is Ana Kovačić and I’m a visual artist from Croatia. I usually work with different media. Firstly, I completed a degree in sculpture and later I studied new media art. Recently, I make a lot of video art, but at the same time, I keep creating installations that combine different media. Often the space that I work in keeps me attached to sculpture. Even if I make a video piece, I do it at people’s homes. That way I can see the way people arrange their space. I have a profound connection to space, either in the physical setup of the work or the way I create video work.

What brought you into the art world?
It’s quite a traditional story. Normally, my decisions are very intuitive. In high school I was interested in many things. However, the only thing that made me really excited when thinking about my future was the thought of being an artist. Thus, I went to an art school. Back then I didn’t know that much about the different challenges of being an artist, but they caught-up with me immediately after the school, especially the financial ones. Because of this reason a lot of people give up their art. For me, being an artist is very challenging to this day, but every time I think of giving up, I feel very sad. With every artistic project that I finish, I become stronger and more determined in what I’m doing. It’s already too late to give up.

What is the most important thing about being an artist? Is there a key to success?
The most important thing to never give up and that is not easy. What keeps me going is the wonderful feeling of excitement in the process of working. I think it is important to be true and honest to yourself. Sometimes it’s important to understand that you should not push it and rather to trust the process. And especially, if the work engages with other people. It is very important to remember to always be human first, and the artist second, in order not to endanger the wellbeing of other people for the sake of an artwork. Success is very relative. I feel successful when I feel like I have done good work.

What inspires you?
During my career as an artist I had many inspirations. There were different people, artists and filmmakers, who have make an impression for me at some point. Recently, one of my biggest inspirations is the German film director Werner Herzog and his documentaries. Normally, various films, books and music inspire me. However, I think that everyday life and people that I meet, as well as places they live in and their life conditions, have a strongest impact on me and my art. 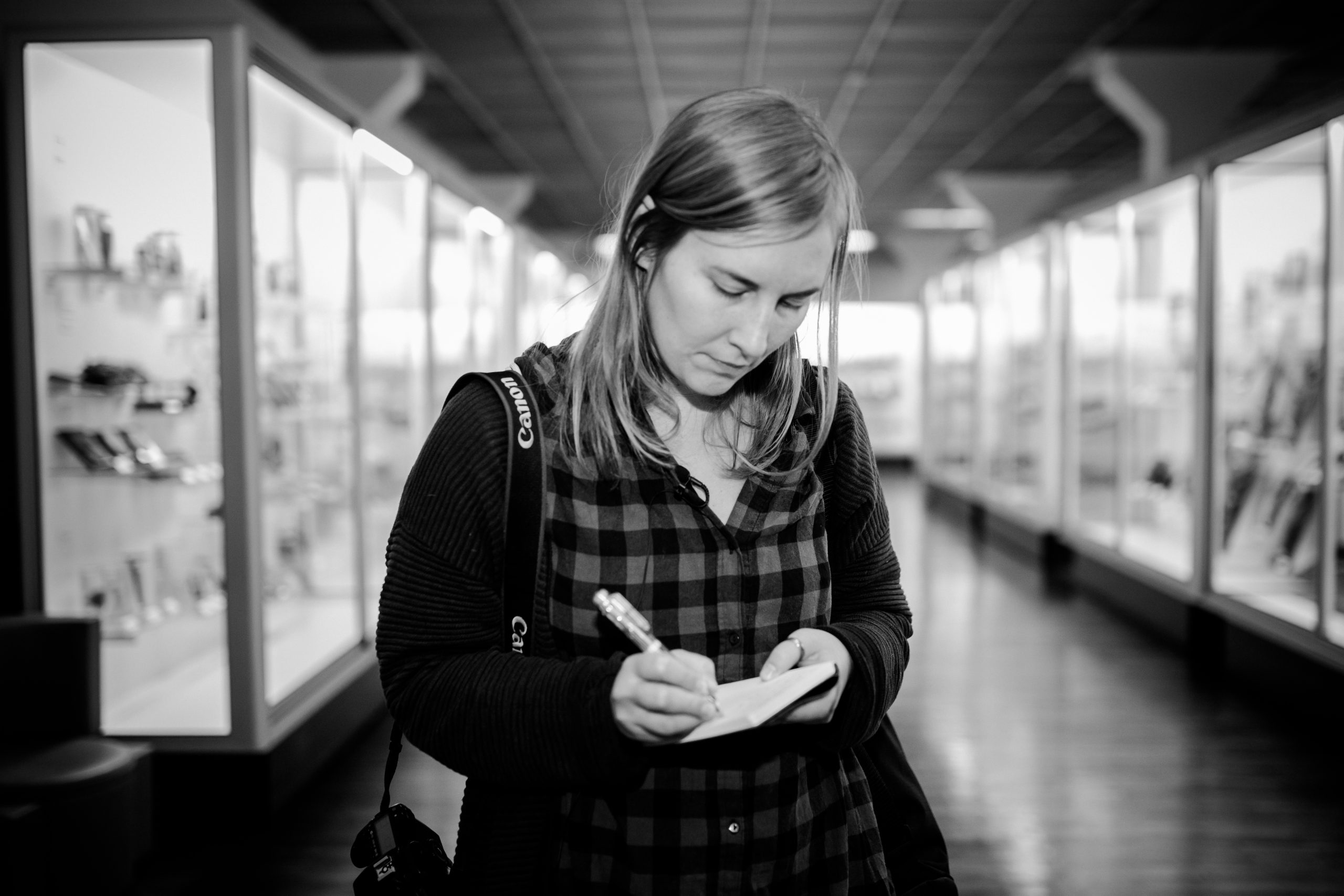 How do you choose your research themes?
My body of work is an outcome of my everyday experiences, people that I meet and my journeys. I don’t sit in front of my computer all the time and look for the subjects that interest me. It all comes from life and once I find a theme that interests me, I go deeper into it. Quite often my research is based on interaction with people.

What are your most memorable moments when working with people?
There are always many memorable moments. For instance, when I did my research for a project in Croatia, I went to a village inhabited mostly by elder people. There were no youngsters left, since they all moved away. The idea of moving is always present in my work, even when I speak about people who stayed… The elder people of the village felt lonely and when they saw me, a young artist, coming and showing an interest in them, they got attached to me very easily.

When they were younger they used to spend a lot of time. I had this idea of making a group portrait. There was a place in the village where they used to hold conferences. I organized a meeting in that place. We all met and had lunch together, and I made the portrait. Those type of moments are important to me. Of course, at the same time, it’s very challenging. These projects are never really finished, since I always feel attached to the people that I meet during the process.

Could you tell us more about the project that you created for this year’s Kaunas Biennial?
The core of my work is the personality of a Lithuanian zoologist Tadas Ivanauskas. The theme is very broad, since Ivanauskas did a lot of things in his lifetime. I immediately got attached to the idea of travelling, because Ivanauskas travelled a lot, even though he lived in times when it wasn’t as easy as it is today. I was very interested in how he managed to transfer all the animals from one place to another. The idea of a researcher and a traveller at that time seemed pretty complicated to me. However, the idea of travelling is essential to this project.

What did the research process for the project look like?
My plan was to collect all the material for the project during my stay in Lithuania in April. I was recording videos and sounds in Cape Ventė, Žuvintas, Neringa, on the ferry from Klaipėda to Kiel. I worked intensely for three weeks. I was travelling a lot and met a lot of people, who helped me. I came back to continue my research in May. During the research phase, I managed to uncover the personality of Tadas Ivanauskas, the importance of his work and his long-term legacy. It is quite amazing, how he managed to leave such a huge and important archive of photos, writings and documents. His love and dedication to his work was really impressive and inspiring, as well as his authentic personality. 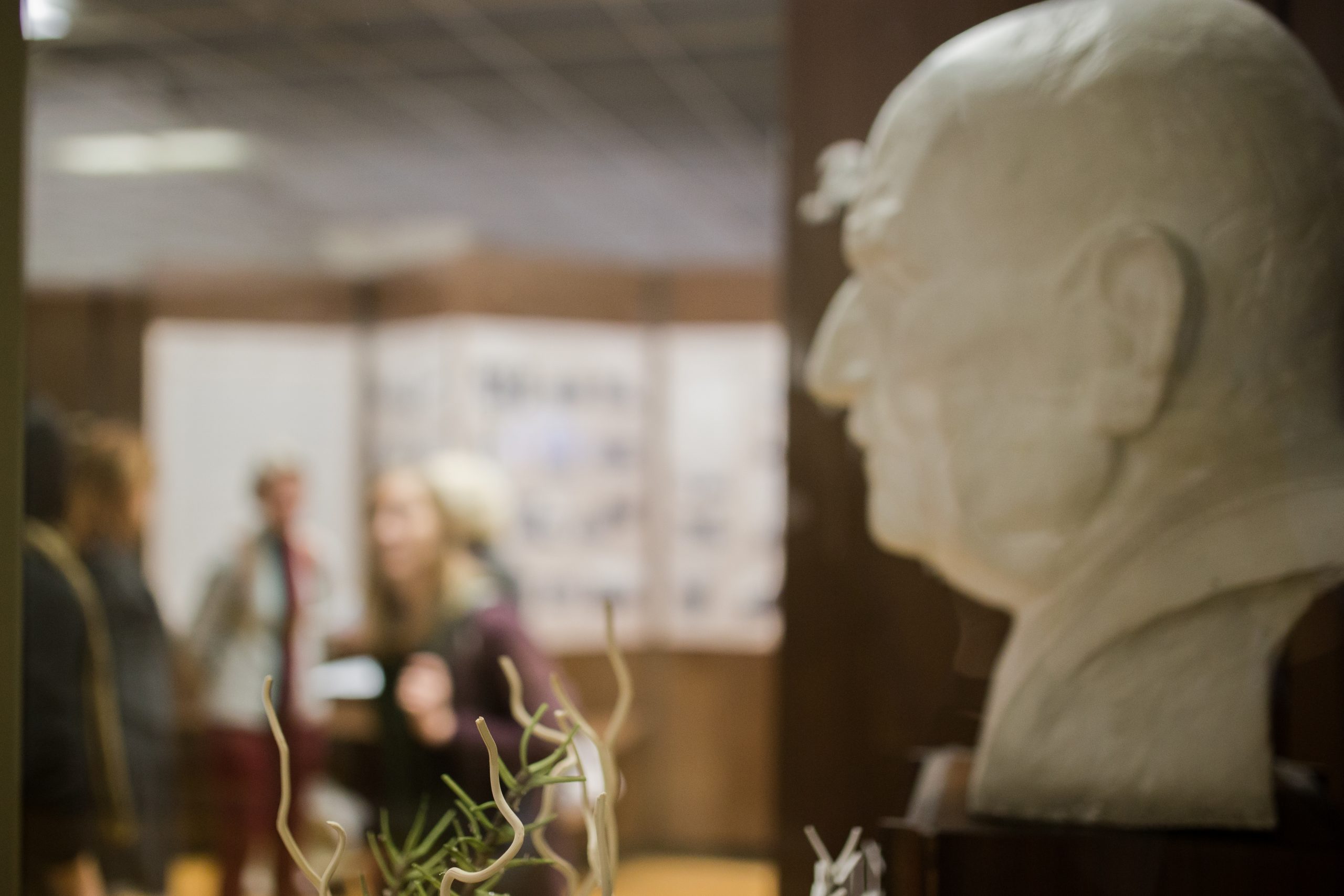 Why did you choose birds as the main motif for your project about Tadas Ivanauskas?
I chose the theme of birds for a few reasons. Firstly, Tadas Ivanauskas was an ornithologist and he was observing birds since he was a child. He inherited his knowledge and love for birds from his father, who was a taxidermist. The first collection of Kaunas Zoological museum is Tadas Ivanauskas fathers’ bird collection. Secondly, birds are known to be constant travellers, so it seemed very natural to me to connect these migrating creatures with the personality of Ivanauskas. Also, since I wanted to connect Obelynė to the city center, it made sense to introduce birds into my work, because it seemed like birds, as creatures that are in a constant motion, would give a reason for my work to be spread out in a few places in Kaunas.

What does travel mean to you personally?
Travelling is very important to me and I do it almost every day. As an artist, I change a lot the places I live and I don’t feel like having one home anymore. It’s very interesting, if you consider it in terms of the ‘being at home’ feeling and our attachment to places. I keep following the change within me. I get attached to places very easily, but each day I feel different. It’s as though I become more fluid.

What message would you like to give for the visitors of this years’ Kaunas Biennial?
The theme of moving is very important in nowadays Croatia because a lot of Croatians are migrating for economic reasons. It seems to me that you have a similar problem in Lithuania. This is what I’m interested in. Even if the work for the 12thKaunas Biennial is initially about Tadas Ivanauskas, I hope that I succeeded in approaching the subject in such a way that each visitor of this year’s Kaunas Biennial finds something that they can relate to.

“MagiC Carpets” is a four-year project funded by the EU “Creative Europe” that connects 13 cultural organisations from different EU and candidate countries. The project is intended for travelling emerging artists to work in a socially engaged art field and through the process of co-creation with local artists and communities realise new projects in the public spaces of various European cities and regions.