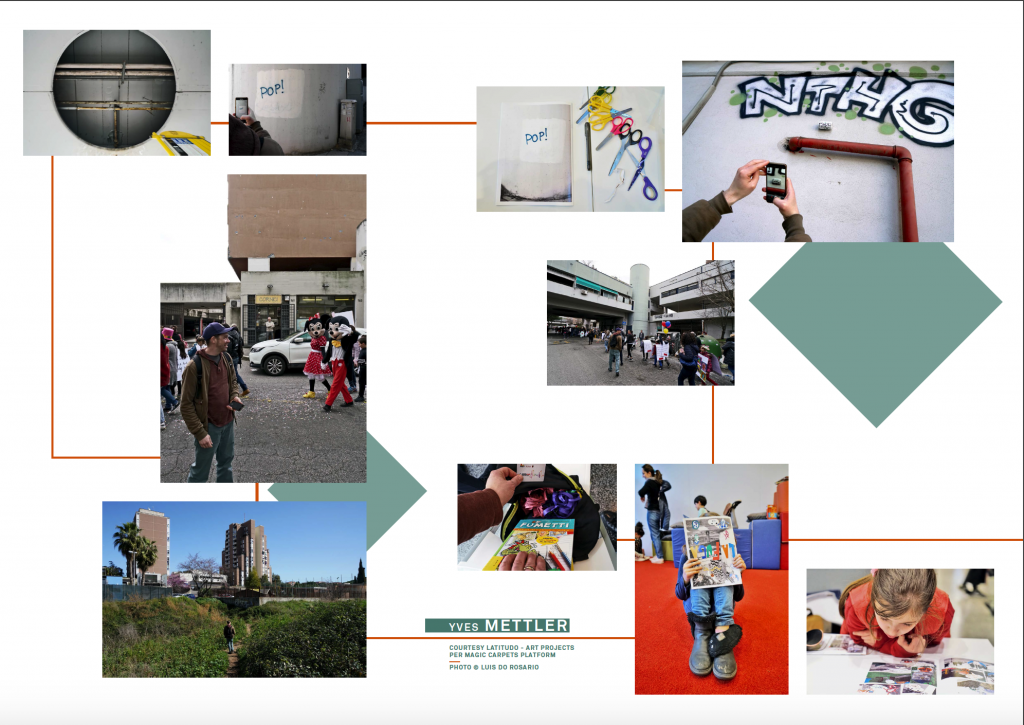 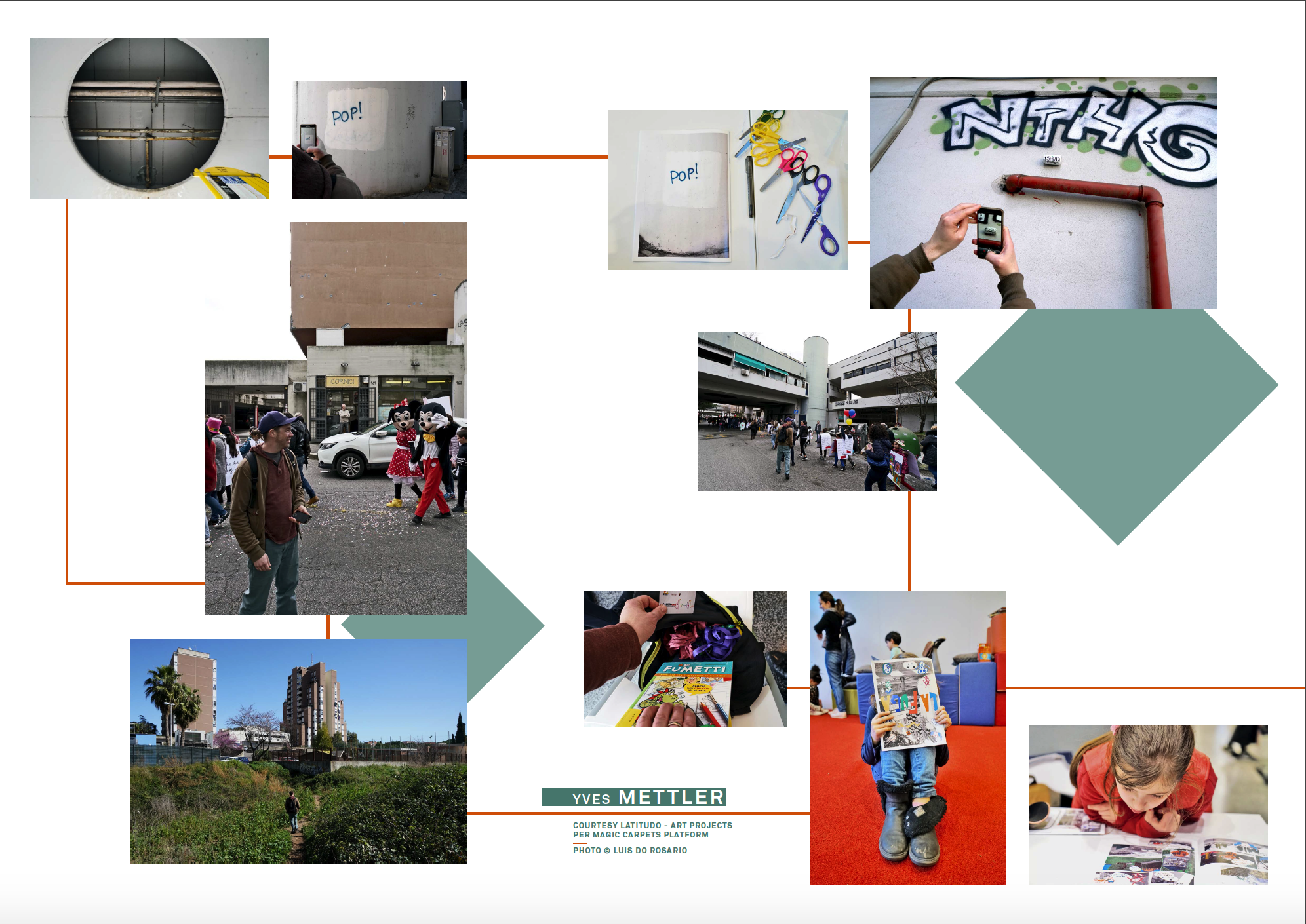 Latitudo-Art Projects and the Accademia di Belle Arti di Romapresent the exhibition Flowing Cities, a double solo show dedicated to the artists Yves Mettlerand Patricia Geraldesas part of the international platform Magic Carpets, now in its second edition, from 17to 22 June2019 in the Accademia’s exhibition spaces, where an installation by Patricia Geraldes will be on view until 27 June in Piazza Ferro di Cavallo.

Magic Carpets(2017-2022) comes from an idea of Benedetta Carpi De Resmini, the curator of the initiative for Latitudo-Art Projects. The project was developed thanks to a network of thirteen European partnersand is co-financed by theCreative Europe Platform Programme, the European Commission’s programme to support the culture and audio-visual sectors.

The organisers’ aim is to increase dialogue between the countries partner of the platform – Austria,Croatia,Georgia,Germany, Ireland, Italy, Latvia, Lithuania, the United Kingdom,the Czech Republic, Romania, Portugal, Serbia – through a programme of artists’ residencesand exhibitions that involves international artists working on themes of identity, territory and community.

Yves Mettler and Patricia Geraldes, the two artists invited for this second edition,were asked to work on the changeover that is affecting the Roman neighbourhoods of Laurentino 38and Corviale,and to interpret, with their personal tools ,a change underway that involves urban identity and social fabric, driven by new forms of community participation.

During their workshops in Corviale and Laurentino 38 in March and April, the two artists engaged in the two neighbourhoods active inhabitants and associations, joined by students of the Accademia di Belle Arti di Roma, the prestigious institution that will host the final exhibition Flowing Cities in its spaces in Via di Ripetta starting on 17 June.

Yves Mettler (Morges, Switzerland, 1976), nominated by the German partner ZKU/KUNSTrePUBLIC, worked on several levels. His artistic inquiry is focused on urban structures, and his work for Magic Carpets #2 started with the unique conformation of Laurentino 38, an urban area south of the capital, fragmented by the presence of 11 bridges. During workshops organised with the Biblioteca Laurentina –Elsa Morante Cultural Centre, the Swiss-German artist worked with two groups of young people, trying to look at a complex neighbourhood like Laurentino 38 through the direct perspective of those living there: with the smaller children, he created a comic book storytitled The Escape, and with the valuable help of the Pontedincontro association, he managed to engage the group of teenagers in an ambitious sound and video project.

For Patricia Geraldes (Porto, 1980), nominated by the Portuguese Ideias Emergentes, the Corviale provided the backdrop for a workshop with children, adults and elderly people from the neighbourhood. Also known in Rome as the “Serpentone” (Big Serpent) because of the length of the buildings, the Nuovo Corviale residential complex is one of the most controversial building from the post-Second World War period. Thanks to the collaboration of the Mitreo – Iside Centre for Contemporary Art,Geraldes, whose work is focused on narration and memory, gathered storiesfrom Serpentone residents into original diaries that provide a snapshot of neighbourhood life, individual traditions, intimacies and expectations of those living there.

For the exhibition at the Accademia di Belle Arti di Roma, Yves Mettler will present a two-channel video work, projected in the Sala Colleoni, stemming from the artist’s research in Laurentino 38. On the walls of the room, a story that the artist prepared during his workshops with neighbourhood youth will be displayed: posters, photos and comics will compete to share the intricate world of the Laurentino.

Patricia Geraldes will present the diaries she created with the residents of the Corviale: photos, memories, collages and drawings will create varying and contrasting visions of the neighbourhood. In the central square, Piazza Ferro di Cavallo, the artist will present a sculpture based on the idea of restoring a virtuous balance between humans and their environment: the site specific work will be composed of branches carved with memories and emotions drawn from her work at the Corviale.

In the spaces adjacent to the Sala Colleoni, there will be a visual narration of the residences of these two artists, using photos of their time studying and working in Rome, taken by the photographer Luis Do Rosario. These photos were taken by following the artists during the day-to-day of their residences, among their books, their things, their research, as an invisible observer, with the special ability Luis has of revealing the artist him or herself better than any other analytical description.

Along with Luis do Rosario’s photos, there will be photographs, documents and drawings made by the Italian artists in residence with other platform partners. Alongside the project carried out in Italy, Magic Carpetssponsors the work of Italianartistsabroad,with the idea of cultural exchange between European countries. For this second edition, the artists invited to develop a residence project linked to a place by starting a dialogue with the community wereElena Mazzi, selected by ZK/U di Berlin, and VirginiaZanetti, chosen by Ideias Emergentes in Porto.