MAGIC CARPETS LANDED WE WILL LEAVE OUR SHAPE BEHIND
Jul 06, 2022 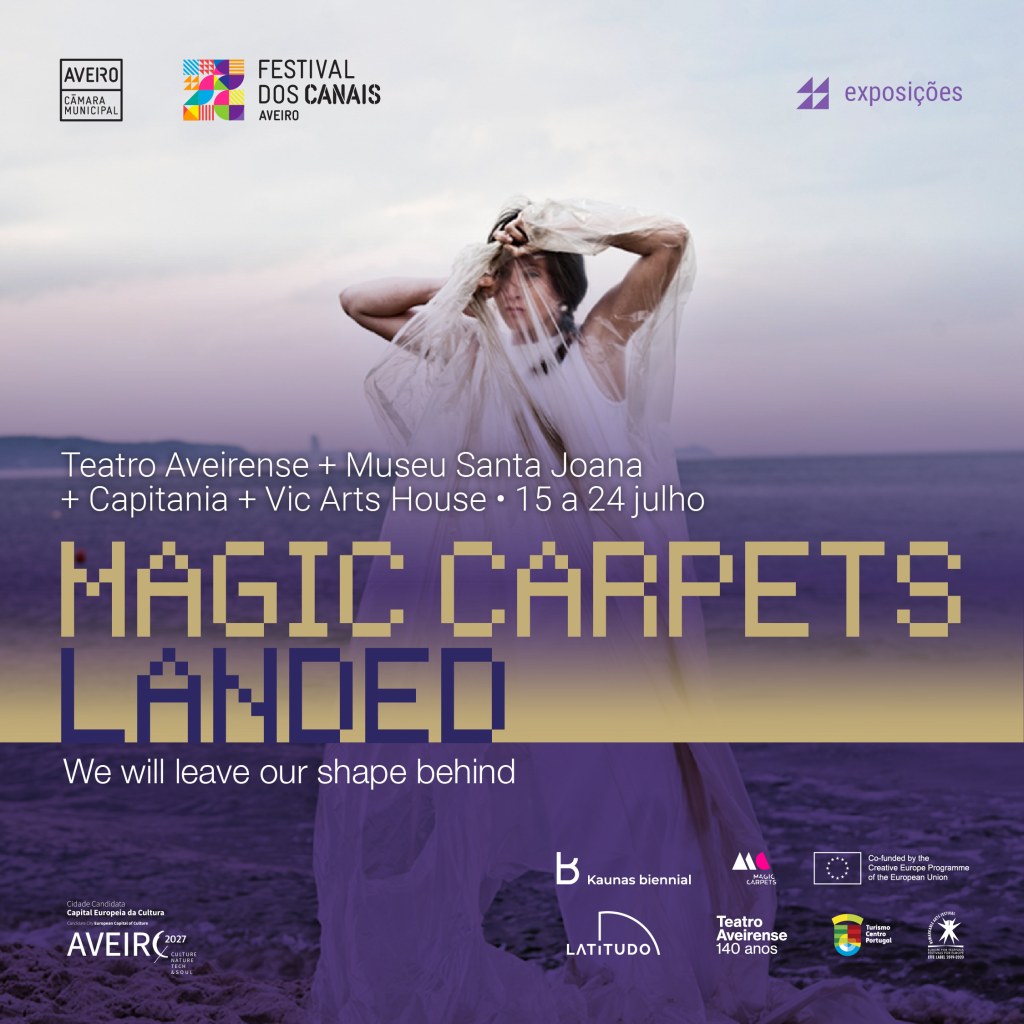 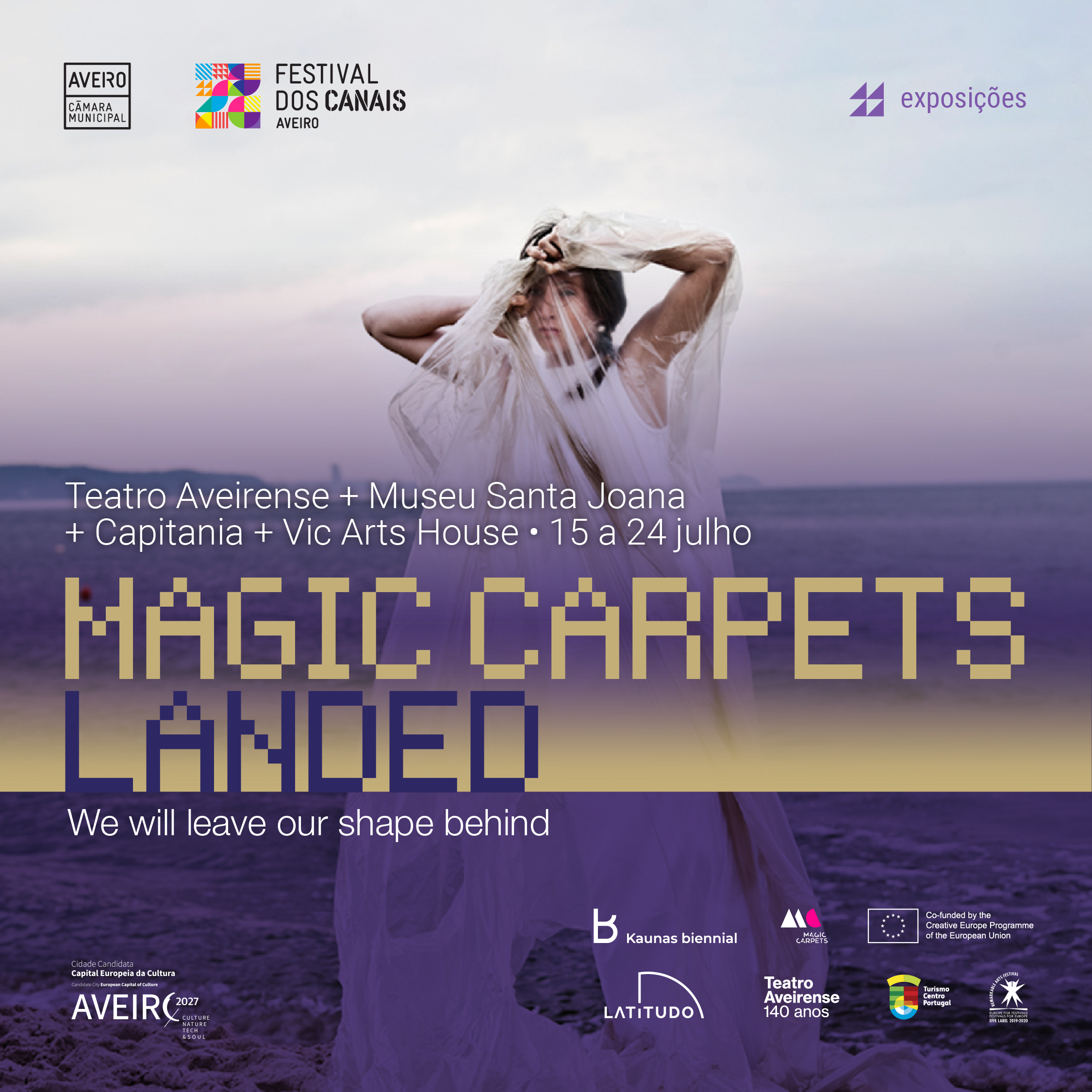 The international exhibit MagiC Carpets Landed is coming to Aveiro – Festival Dos Canais from 15th to 26th July 2022.  After the final exhibition that opened Kaunas – European Capital of Culture 2022 the project is landing in Aveiro. The exhibit is showing the four-year project MagiC Carpets, co-financed by EU Creative Europe. This journey around Europe, with its gaze set on the future, actively involved young audiences and local communities in the fifteen partner countries. The concept for the MagiC Carpets platform came from an idea of the curator, Benedetta Carpi De Resmini, art critic, curator and art director of Latitudo Art Projects.

The title refers to “1001 Arabian Nights” fairy-tale story about the magic and flying carpet, for travelling across the world in a twinkling of an eye. This fantastic device is also referring to a constantly mutating story to rewrite, reread and alter ad infinitum. This book of mirrorings becomes here a convincing metaphor of the power of culture to change the mistrust and confrontation into intercultural dialogue, mutual understanding, respect and even love.

The exhibition from the idea of the curator is a co-creative process, and not just a show of artworks. The main concept that underlies the whole project is related to the idea of transformation and mutation. Community creative processes, which as Magic Carpets platform have undertaken together with artists during these 4 years, needed to accompany the visitor in a new story, in a constantly mutating exhibition. Because – as Scheherazade tells us – a story that begins never ends…

Therefore, this project as the initial concept needs to speak to the audience about our contemporaneity, that depicts and narrates the story of a living organism, which changes and mutate as in nature in a biological growth.

This exhibition in Averio following the initial idea of transformation of bodies and the fluidity of creativity wants to focus on female artists. Warriors able to adapt to different and adverse circumstances, without sacrificing themselves. Women that are capable to transform situations, finding great strength in creating a cohesive and resilient network. which the subtitle is “We will leave our shape behind” (inspired by the Audre Lorde poem A woman speaks) gives the idea that we are passing a new period.

The artists in the exhibition are revealing our contemporaneity as Yaryna Shumska (UKR), addressing a prayer to the future Melissa Rodrigues (PT), transforming the vision like Grossi Maglioni (IT), enhancing the gaze while playing such as Gemma Riggs (UK), Dancing with our wounds Merri Mkrtchian (GE), creating a new present with our past Ana Dana Beros (HR), Encountering the Others such as Verónica Troncoso (DE), all in the Capitania. Furthermore are: mixing up the rules Elina Marta Martinsone (LV), inviting to listen to our ecosystem Francisca Rocha Gonçalves (PT), building communities Jelena Skuliene (LT), in Teatro Aveirense. Then in the Museu de Santa Joana are exploring ourselves Paulina Almeida (PT) and connecting identities Las Mitocondria.

With the video Review in VIC Aveiro Arts House you will discover the roots of the project through a wide selections of artist videos.

Along with the exhibit, MagiC Carpets Landed includes a structured programme of performances and workshops alternating throughout the duration of the exhibition. The common thread connecting the various artists the curator selected for the exhibition is really the energy and strength that brings out movements of change within communities. Among the various artists involved, Yaryna Shumska, Marta Martinsone, Maria Angeles Vila Tortosa and Grossi Maglioni will open the exhibition during the first weekend on 15-17th July.