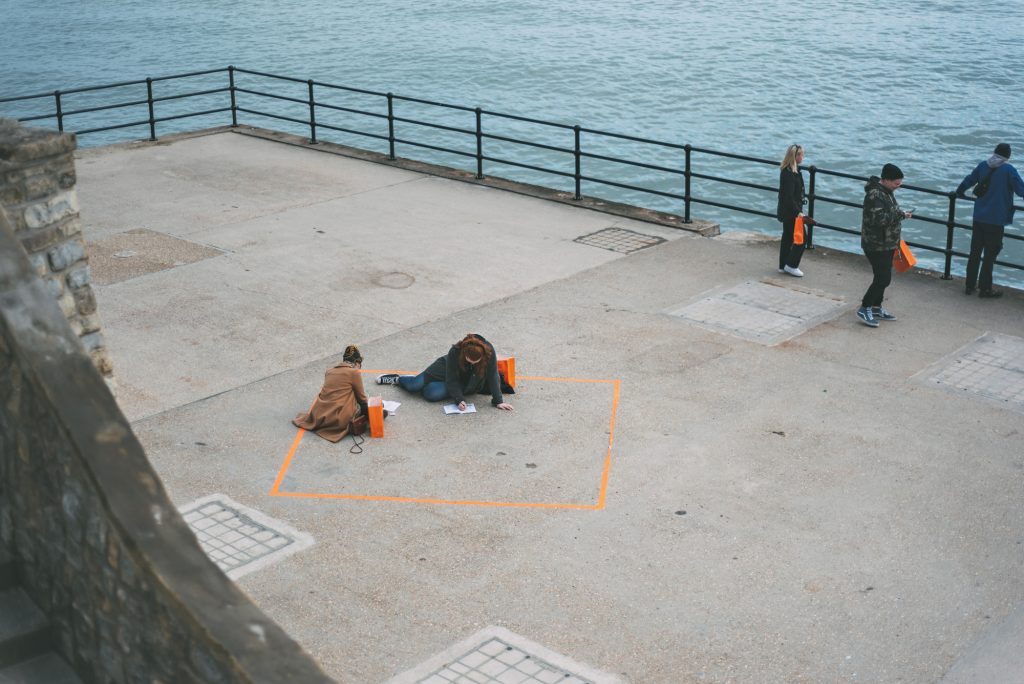 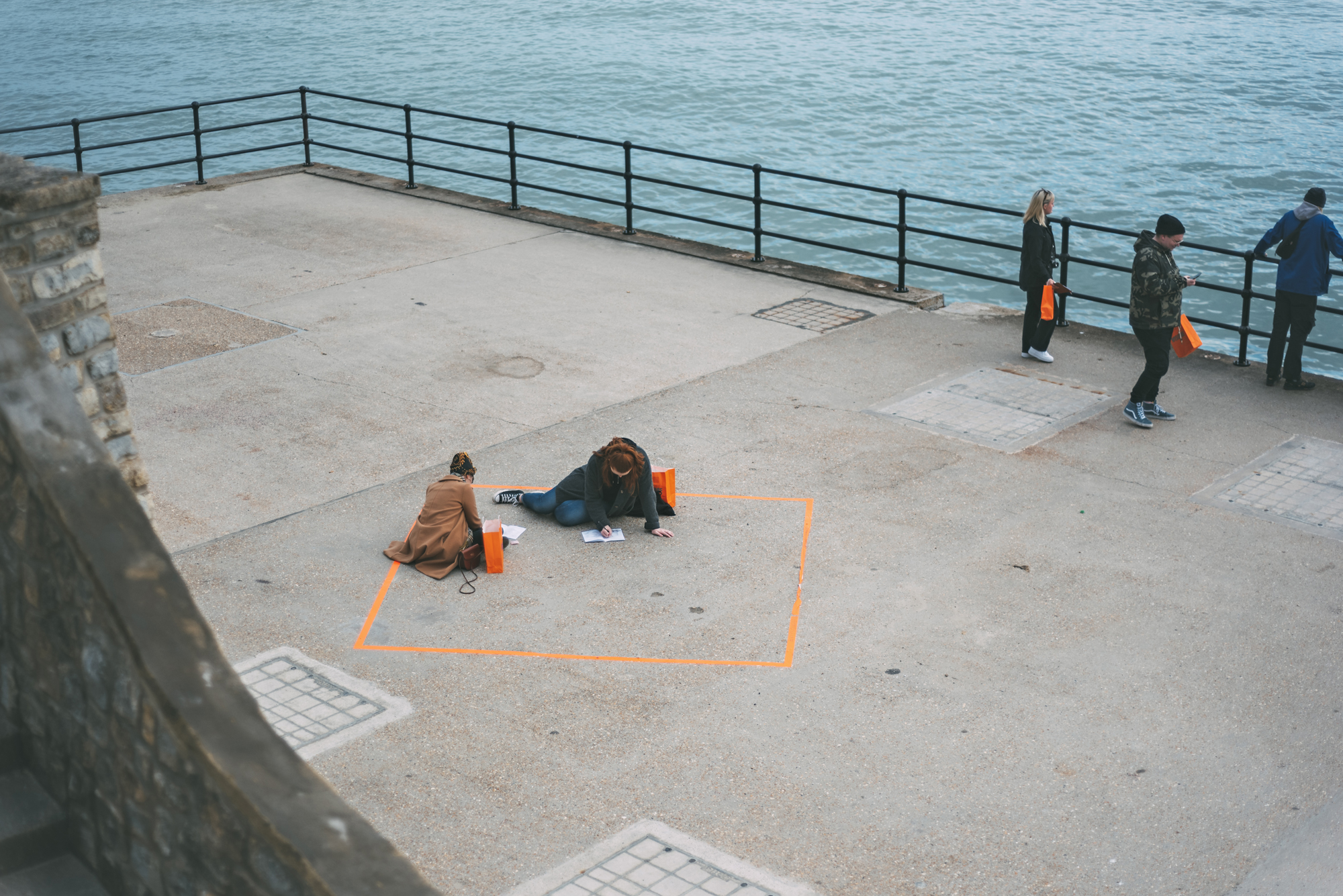 This year the Folkestone Fringe has stepped up to the huge challenges posed by Coronavirus to
deliver their Festival of Looking with imagination, creative skills and empathetic professionalism.
The question they posed ‘What’s happening, exactly?’ went right to the heart of it. A forensic look
at the physical fabric of this seaside town, it’s coastal geography, it’s edge of England location
and all that that means at this specific moment in time. The question also asks, who are we, its
citizens, this community so intensely thrown in on itself through the months of Lockdown and
ongoing time of restrictions. When you ask artists to respond to such questions be prepared for
surprises, for new insights, a reshaping of previous conceptions and here in Folkestone’s Festival
of Looking they have not disappointed, delivering a cornucopia of delights.

With current restrictions in mind the curator, Georgie Scott, and her team designed a festival
which could be experienced physically and virtually. Organisationally and technically this is a
hugely difficult task, almost impossible to deliver exceptional quality to both audiences,
particularly on a low budget. I viewed the Festival entirely online as I was unable to visit
Folkestone, as much as I would have liked to. So I am writing from this perspective. Some events
and projects were more suitable to virtual interaction, were in fact designed especially for it, and
others required physical participation or were greatly enhanced by the ability to feel and explore
textures and environments.

In this, year two, of the Festival of Looking, the Fringe together with the Urban Room Folkestone
presented outcomes and ongoing investigations of the MagiC Carpets project together with other
events. Over the last six months the Irish artist Mary Conroy, this year’s Magic Carpets artist, who
has been unable to come to Folkestone for her Residency because of Covid, has instead been
asking the people of Folkestone to help her get to know the town by exploring the question ‘What
are you made of Folkestone?’ She invited them to respond by photographing what they
perceived as the essence of their town, its built environment, its geology, its geography, what
gives Folkestone its particularly personality and asked them to up load their photographs to
Instagram. So, although Mary Conroy has been unable to be in Folkestone and was not here for
the Festival she has continued to be involved virtually from her home in Ireland. The diverse
outcomes of the five individual artist’s projects form the basis of the programme alongside other
initiatives, Antidiary and My Square which were set up in response to the Lockdown and the Live
Art Development Agency/ Folkestone Fringe collaborative commission DIY Hope Machines with Dr Duckie and Daniel Tollady continues his Urban Archive: Folkestone, from last year’s Festival of
Looking.

Black Men Are … conceived and organised by Lee Desai as part of Black History Month
Folkestone was an unusual and rare conversation between six black men living in Folkestone. The
talk was curated by the men, prerecorded and then screened, to a small audience, at Brewery
Tap with Lee Desai hosting the event and the open discussion. It was also a simultaneous Zoom
link open to all who registered to join in. The format worked seamlessly, with only slight distortion
of sound in the recording.

It was a relaxed and heartwarmingly frank discussion between men, some who had known each
other for many years, others who were more recently acquainted and a couple who had not met
before, but who all now lived in Folkestone. Kevin and Jason talked of growing up in Folkestone,
of being at school together, of scars of racism experienced as children and young men, but also
how they had forged their own identities, rejecting the stereotypes frequently imposed on them
and felt very much part of this, their local community. Music was obviously a shared occupation
and love for all of them, a way they found to express themselves, both professionally and
recreationally. The music world provided a place where their abilities were recognised and their
colour, if anything, an asset. Others who had come more recently to Folkestone seeking an
interesting and creative community in which to live and thrive, brought with them experiences and
knowledge of different lives and journeys. Childhoods in African and European cities which gave
them a different sense of history. A different sense of how they saw themselves and were seen by
others and how that had shaped who they were. They talked of being sons and fathers and how
incredibly important it was to them all to be good role models for the younger generation. They
also talked of Arike, their friend who had been a role model to them, a real local identity who had
recently died. There was sadness, anger, fear and so much humour, laughter and genuine
camaraderie amongst them which was inclusive, relaxing and enabled quite difficult and uncomfortable things to be said and, more importantly, heard. The music playing the event in and
out was a joy and bookended the conversation perfectly.

Alongside this was Aida Silvestri’s insightful exhibition, which questions the stereotyping of Black
men, at the Brewery Tap UCA Project Space, I AM Fully Human. A project, again as part of the
Black History Month Folkestone programme, exploring the image of Black men in portraiture and
fashion in honour of Arike (1949-2020). Arike was an artist and Folkestone legend who died
suddenly just before Black History Month and the Festival of Looking. His presence was strongly
felt throughout the Festival, even to me who didn’t know him and was only viewing the Festival
online. He was clearly a role model and creative force to those around the town, where he had
lived for the latter part of his life. Silvestri’s strong, clear portraits stood like men of purpose and
position, proud and joyful in the courtyard of Brewery Tap, and shown online free and open for all
to see and question. Who were these men – musicians, politicians, pop stars, heroes or fashion
models? All and none of these labels it seems, they are very human, very real members of
Folkestone’s diverse community. New role models perhaps for a new generation. In the context of
Black Lives Matter and the worldwide protests against the killing of George Floyd, Silvestri asks
‘How can we encourage Black men to reclaim their true identity and create their own narrative?
Her title a reminder of the US early sixties civil rights protest cry, I AM a Man!

Dr Duckie’s Homemade Mutant Hope Machine continued the connection the Fringe has had with
LADA, placing an artist with a group of locally based artists over a six week workshop situation.
The interaction with Ben Walters (Dr. Duckie) must have been a shape shifting experience for
those five artists if his talk with Diane Dever, Folkestone Fringe Director, was anything to go by!
This Zoom discussion was a really brilliant dialogue between two engaged, passionate and
articulate speakers and there were no technical problems! Ben introduced us to his ideas
embodying the Hope Machines, a means of connecting, supporting, enabling the discovery of
possibilities previously unthought of. The physicality of Hope. He asked the artists he was working
with to come with some sort of an idea for a project to help start the conversation. The workshops were not framed for outcomes but the process, the experimentation, testing the water, learning to
walk again ‘the way we do the thing is the thing.’ This is such a gift for any artist, a space for
breathing, opening one’s eyes even wider. He had them, and us, exploring ideas of unconditional
support, subjectivity, flexing unused muscles we had forgotten we had, disrupting the norms,
investigating new ways of doing things, being less fixated. Throughout the workshops, more a
salon perhaps but skills based, the artists worked with him online although he came to Folkestone
for the first and last session. The artists decided to set up a WhatsApp group to ensure an
ongoing supportive network and also explored the possibility of creating a queer space for
Folkestone, a place to meet up, feel safe, something they felt was lacking in the town. Ben
noticed how caring they were to and of each other.

He and Diane talked of the Fringe, of its 12 year life and what next. How the town was changing
and the role of organisation developing. The shift in 2014 as the Fringe became more integrated
with the Triennial, a surge of ambition, taking on extra young staff and expanding projects and
collaborations. Perhaps they had become the establishment? An uncomfortable thought – said
Diane! They do, she affirmed, remain constantly alert, questioning, ready to challenge and be
challenged, contributing art ingredients to the unfolding development of Folkestone. An
expanding organisation and changing landscape can be hard on the individual members of the
team and they need nurturing. Ben talked of modelling Care, the importance of relationality – artist
to audience, curator to artists. A need for a slower more thoughtful working atmosphere,
reciprocal care between artists, organisations, audience. Less focus on outcomes, numbers,
tickets, a more qualitative less quantitive experience for all. Less cultural consumerism. By
reshaping and nurturing the context within which creative activities take place an enriched and
more meaningful experience for all involved will follow. ‘Fun is important’ was Ben’s closing
remark! Perhaps on this basis we can shape the post Covid world?

Also taking place on the same weekend as the Festival, The Napier Barracks Welcome to
Refugees was a positive proactive gesture of over 150 local people, with colourful banners and
music. Staged outside the barracks for those many occupants within. Countering the racist
anti-immigration demonstrations of a few groups. To clearly state to these people, who have
come to our shores seeking refuge and safety from war torn ravaged countries, that they are
welcome in Folkestone. A reassuring demonstration of a community, about a community that is
willing to be open and expansive, able to understand the value of new voices, new histories which
can be woven into the rich tapestry that is Folkestone, that is England. Images were shown on the
Fringe website and the event had very good local News coverage on TV and other media.

Another key MagiC Carpets project which formed part of the Festival programme was Craig Gell’s
Pent Happenings, his response to ‘What’s Happening, exactly?’. Gell’s ongoing project
investigating the flow of water in the Pent stream, is a series of audiovisual works which react to
geophysical data. Assisted by a group of local residents in a field gathering workshop the
previous day, Craig gathered together all the resulting data and translated it into a sound piece.
He showed this together with images of graphs and findings at the Closing Event of the Festival to
a physical audience. The event was streamed on Facebook and available to all. As an online
experience it was difficult to fully appreciate, although the sound was clear, the images and his
comments were not readable or particularly audible as it seemed that the camera had been
placed too far back from him and the screen.

MySquare and Antidiary are two online projects devised by the Folkestone Fringe young team to
engage the community during Lockdown which are ongoing. MySquare is a mass participation
interactive project for everyone and anyone. Folkestone Fringe are inviting people to choose their
square of the world and respond creatively to your significant location on the What3Words app. A
huge array of images have been uploaded on to Instagram and shared online, marking the
Squares across the ever growing map. A wonderful fluid and expansive project which seems to
have contributions from children, families, young and old, truly inclusive, creating a patchwork of
ideas.