All the pieces of the City Jungle
Hosted for residency in Rome, 2022 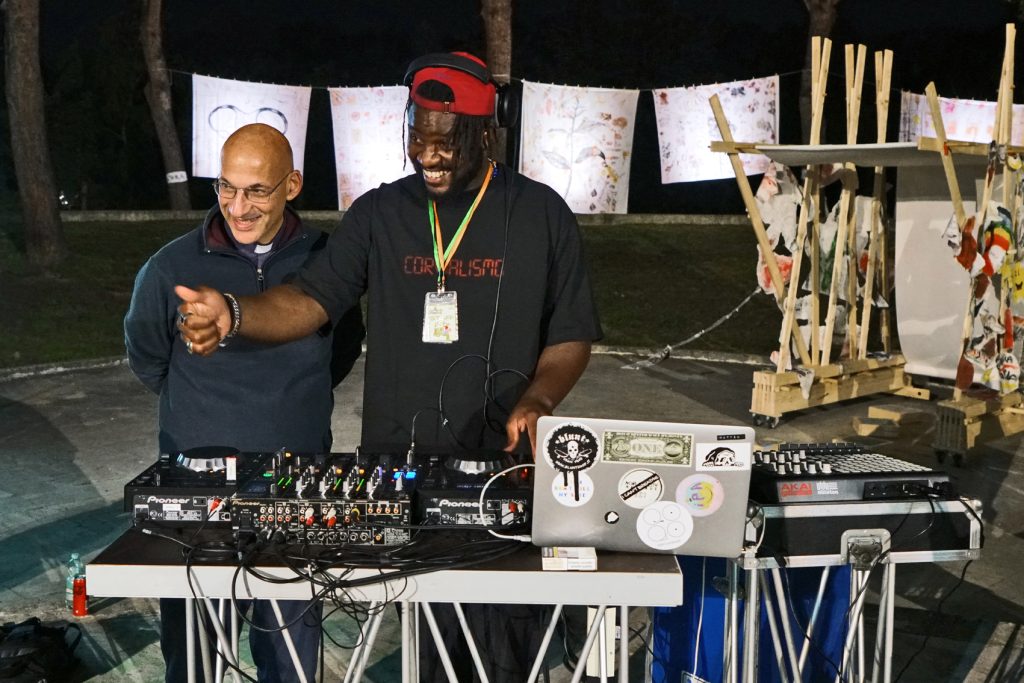 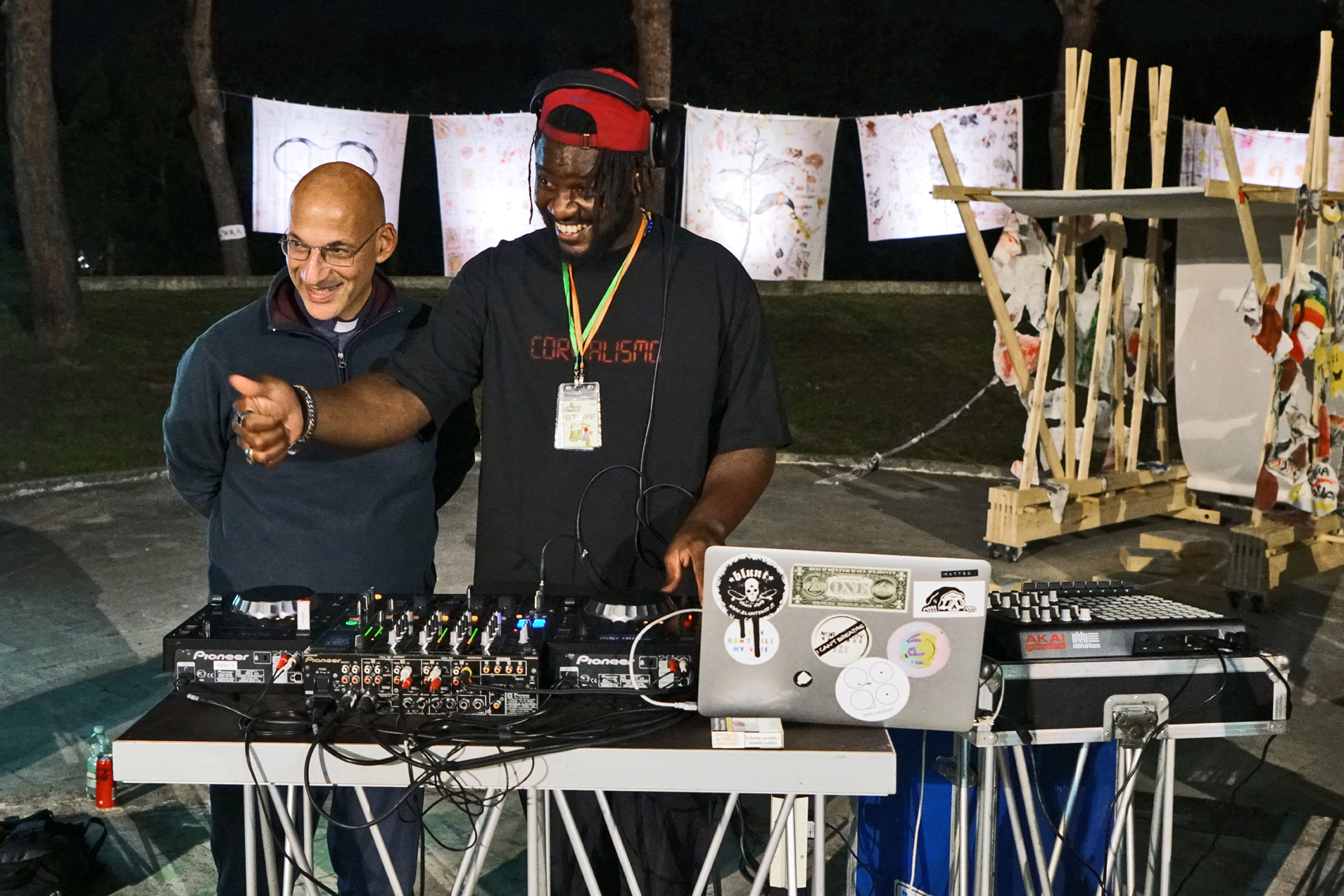 The Italian verb attraversare (to cross): in the active, to pass through a place, in the passive, to go through an experience. This verb perfectly captures the journey we have taken this year. On the one hand, we have physically passed through two neighbourhoods, two urban spaces, two different realities, and on the other, we went through emotions, images, stories, people, and sounds.

City Jungle is a complex, intense, and exciting project, made up of many pieces that come together to reveal the whole puzzle of places, people, stories, and artists. Let’s begin with the places: Laurentino 38 and the Corviale. The first is one of the most famous housing projects in Rome, also known for its 11 bridges, originally designed to connect “islands” of condominiums; the second, Corviale, called the “Serpentone” for its length (about 1 km), is a residential complex southwest of Rome. This isn’t the first time we have chosen to “pass through” these neighbourhoods, but this year has been special, because we have been accompanied by two truly exceptional artists: Berta Tilmantaitė and Sunny Nwume. We’ve known Berta, a Lithuanian photographer, reporter, and multimedia artist, for several years, because she has collaborated with the MagiC Carpets platform since its beginning as a co-founder of NARA, a collective of journalists and photographers. It was Berta who introduced us to Sunny Nwume, aka Black Elektronika, an Italian producer, DJ, and composer of Nigerian origin, who is her partner in personal and professional life. Their ability to scrutinize the world, transform daily life into photos and music, and, above all, create connections between human beings immediately fascinated us, even though we first met through a computer screen. In Rome, at the end of August, we strolled through Laurentino38 and the Corviale with Sunny and Berta, making stops in the latter especially. Here, we met the people living in the neighbourhood, taking coffee breaks, lunches, and dinners with them – but it was their delicateness in creating contacts and personal relationships that became key in becoming – even without our presence – part of the daily life of the area. Sunny’s energy and magnetic power to create connections led us to reactivate old connections and create new ones. Using music, he managed to explore the Corviale’s acoustic soul, but above all, he crossed the boundaries of time and space, speaking directly to people’s hearts.

Trust, friendship, and passion led Sunny to cross over the apparent “deafening silence” of the Corviale. The friendship between him and Ivan, a boy who has lived in the Corviale since he was three years old, his relationship with Paolo, a tour guide in Rome’s centre and a former singer in a jazz band; his bond with Don Gabriele, the parish priest of a small church on the fourth floor of the long building, and his serenades with Nykolas from Laborintus, Giancarlo and Giulio, “boys” from the Comunità X of artists and musicians, became the glue for the time spent with the community. These people represented the different sound frequencies of the building, and the lives that frantically move inside it. Together, we listened to and discovered voices, sounds, and noises that, mixed together, and formed the acoustic story of the Corviale. Berta’s visual reflection on the depth of these moments naturally mixed with this environmental landscape. We got to know stories and memories of the life lived. Berta, turning herself into a metaphorical blank page, leaving her background as a journalist behind, decided to give others the chance to write part of the story. During her residence, she found it important to listen to what others had to say through images. In fact, Corviale residents Aderico, Manuela, and Ivan joined her in taking photos. The images impressed on the film of a small analogue camera allow us to go through their life experiences.

Sunny and Berta’s works merged together, revealing the entire image of the puzzle: magically composed of sounds and images, just like photography is composed of colours and pixels, and music is created from sounds and notes. Their artistic practices and their stories, together with all the people they experienced them with, left an indelible mark on all of us.

Attraversare (to cross) – this year, passing through and experiencing a neighbourhood also meant investigating the infinite variations of the urban space. With Matteo De Marco, a participating artist in the collective of architecture professionals VIVIAMOLAq, we have observed, physically and metaphorically, as well as built new spaces in Laurentino 38 and the Corviale with a mobile wooden device called ARCA (Ark). Another piece of this intricate puzzle of ours was the urban environment and our ecosystem, which is crying out to us for help increasingly more often.

But who could ever really help us in this endeavour, which we might call biblical?

The answer dawned on us right away: children. Free of all superstructures that distinguish the “grownup world”, their curiosity and creativity allowed us to move through spaces, removing the veil of cold and sometimes dark realism from our eyes and minds. It was the children themselves, during the time spent together, who revealed the features of this infinity of mysterious dimensions concealed outside and inside ARCA.

Using the mottos only, like freedom, fantasy and fun with wood, screws, hammers and paints, we created a new environment together, where the very youngest one were the ones teaching us what it means to take care of something, or someone.

The creation of a physical space that is not defined and uniquely interpreted, led Okè, Federico, Marta, and many other small helpers to freely share feelings and emotions with us. The small explorers we met on this journey with the “ARCA” taught us how important it is to listen to our inner self.

The combination of the urban space and green space, of exterior and interior, of amusement and imagination, of wood and colours, took us to a castle with princes and princesses, then a home with parents and grandparents, then to the opening curtains of a lively stage.

With simple gestures, Matteo and his crew were able to create another part of the puzzle made of art and fantasy, where everything, even the impossible, was possible.