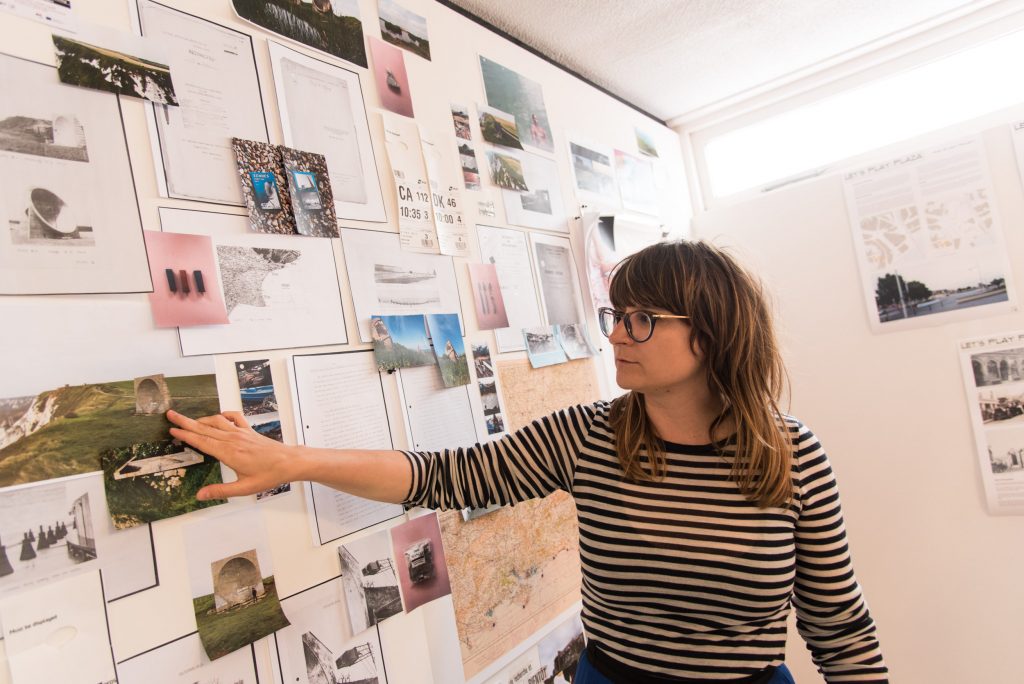 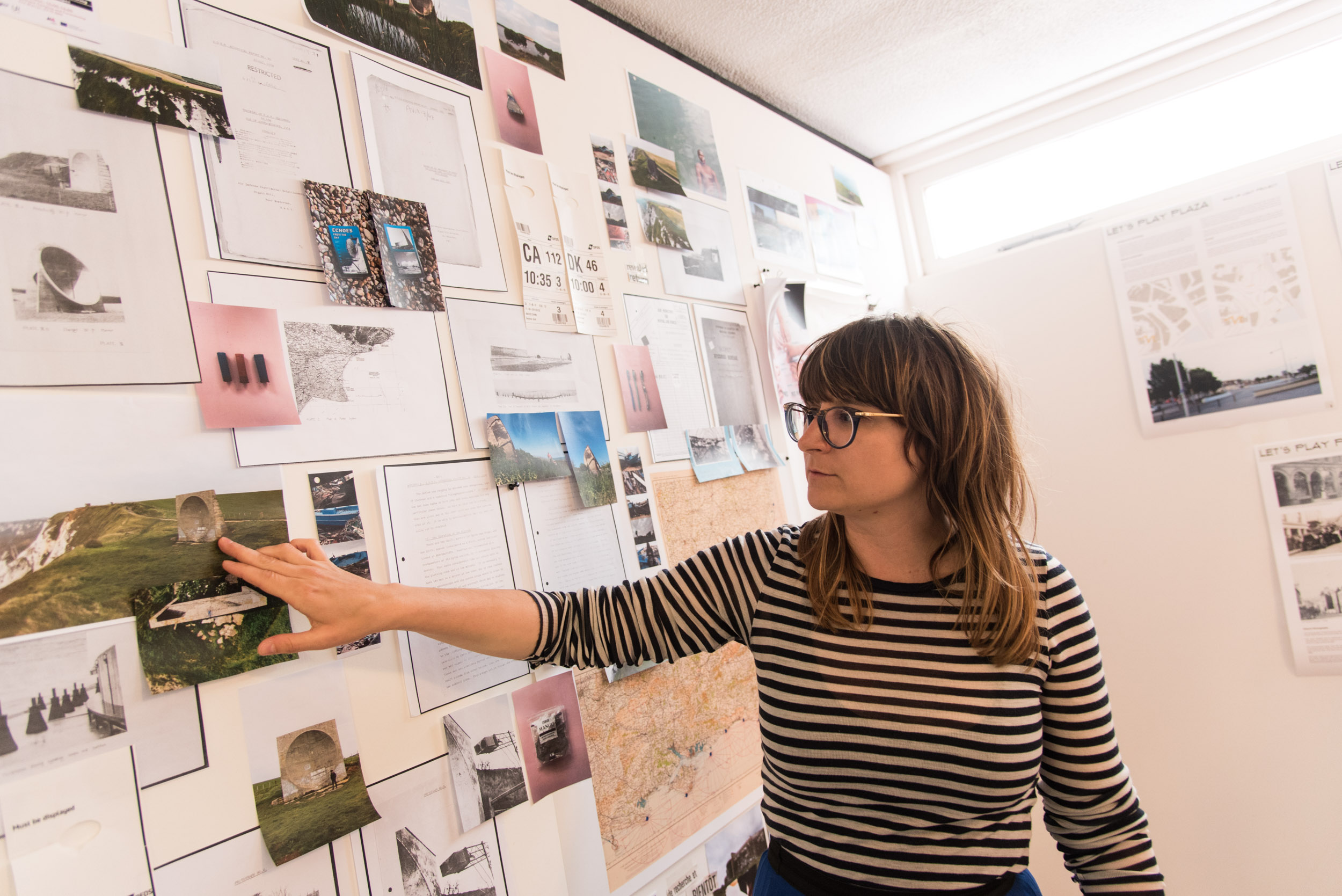 Ana Dana Beroš is a Croatian architect, curator, editor focused on creating environments that catalyze social change. Co-founder of ARCHIsquad – Division for Architecture with Conscience and educational programs UrgentArchitecture. Interest in architectural theory and experimental design led her to co-found Think Space and Future Architecture platforms. Her project Intermundia on trans- and intra-European migration was finalist for the Wheelwright Prize at GSD Harvard and received a Special Mention at the XIV Venice Architecture Biennale. She was one of the curators of Actopolis – a transnational artistic laboratory with urban interventions in Athens, Belgrade, Bucharest, Mardin, Oberhausen, Sarajevo and Zagreb. Her socially engaged practice has components of research, curating, publishing and design.

On Ana Dana Beroš’ arrival to Folkestone, she was particularly interested in the town’s military history and infrastructure, some of which still remains today. Ana was also drawn to the territory of the English Channel (La Manche) which is currently a contested borderscape partly due to migration and also the current political climate surrounding Brexit.

Migration thresholds and contested borderscapes are an ongoing enquiry in Ana’s projects and she used her research visit in April to discover more about these issues in relation to Folkestone. Ana did this by using the many archival resources available at the local library and Urban Room Folkestone. Ana also visited the remaining military infrastructure in the area and focused her attention on the sound mirrors which run along the South East coast of England.

The sound mirrors were built as listening devices to detect aircraft coming across the Channel during World War II. Radar was invented soon after, a much more effective method, which meant that the sound mirrors have been redundant ever since. Most of the sound mirrors remain in place, untouched, acting as reminders of past conflicts.

In response to Folkestone Fringe’s brief of connecting two divided communities by a sometimes seemingly impermeable border, Ana took this to a macro level. Inspired by her research and the current political climate, Ana proposed to develop a project, Landing Mirrors, which would connect people living on either side of the Channel, aiming to create a sense of togetherness and positivity rather than divide.

Ana held a series of collaborative workshops where she invited people to work together to write a text, or ‘Ode to Liberty’ as Ana referred to it. This piece of collective writing was formed from cut-outs of the day’s newspaper, turning negative headlines into positive reflections and statements.

Ana and the Folkestone Fringe team also made several trips across the Channel to France by ferry. There were three main aims of the trips. The first was to discover if there was any similar military infrastructure along the French coast. The second was to find out whether people on the other side of the Channel have the same associations to the stretch of water as the British do. And thirdly, to simply experience what it feels like to cross the border.

The first trip to Calais included visiting the former Jungle site (now a nature reserve) and exploring the World War II bunkers along the shoreline which formed part of Le Mur Atlantique (The Atlantic Wall). To find out more about the Atlantic Wall, Ana visited the local library and collected various images and pieces of information from their archives to add to her already in-depth research.

On the second trip to Dunkirk, the group met up with the director of a local arts organisation who took them on a tour of the town. From this, they found out that, generally, people don’t seem to have the same prominent feelings towards the Channel as the British do. The Channel is a connection, as well as a separation, for the UK to mainland Europe and so perhaps has a more significant meaning for Brits in terms of negative associations such as invasion and threat as well as positive associations such as connecting to the European community, travel and trade.

The team also returned again to the former jungle site so that Ana could take some field recordings and documentation which would form part of her final event.

Whilst the group was in France, they bought the newspapers of the day so that the ‘Ode to Liberty’ would be a bilingual text and made up of language from either side of the Channel.

For the final event of Landing Mirrors, Ana hosted a public walk along the Kent shoreline and up the cliffs toward the sound mirror closest to Folkestone called Abbot’s Cliff. Along the way, the group collaboratively read aloud excerpts from texts by the civil rights activist Audre Lorde and reports on the use of sound mirrors. Headphones with three sound pieces were passed from person to person along the route which were made up of recordings from three of the main migration thresholds Ana had visited; Lesbos, Lampedusa and Calais. When the final destination of the sound mirror was reached, the group came together to collectively perform the bilingual text from the workshops titled ‘The Harbour Town Reborn’ through a megaphone across the Channel. A public act which, in Audre Lorde’s words, attempted to transform the ‘silence into language and action.’

Ana’s research will form part of the ongoing research at Urban Room Folkestone and will be publicly accessible for residents and visitors.