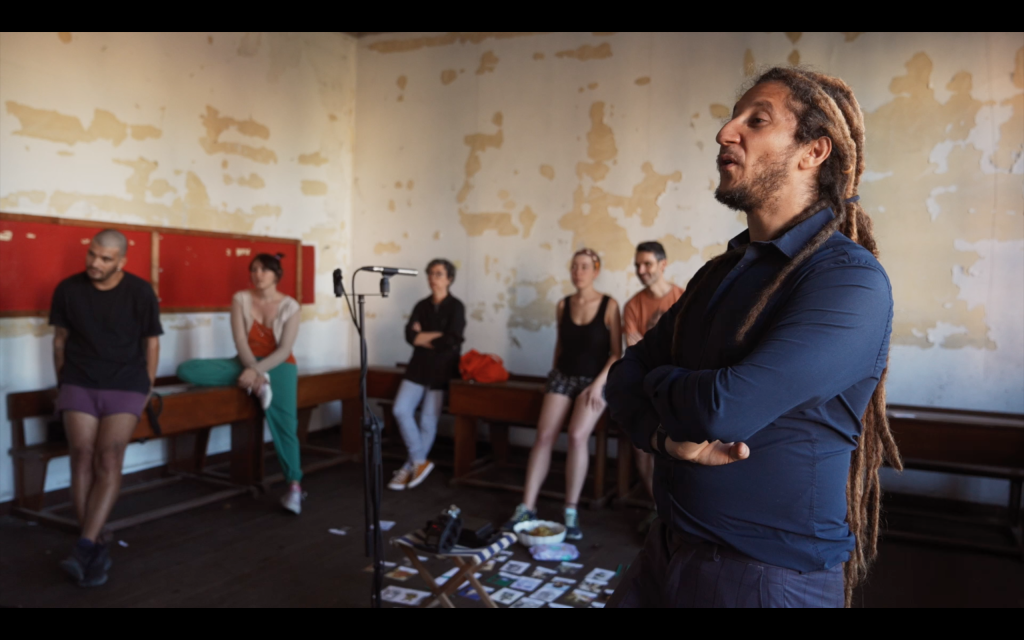 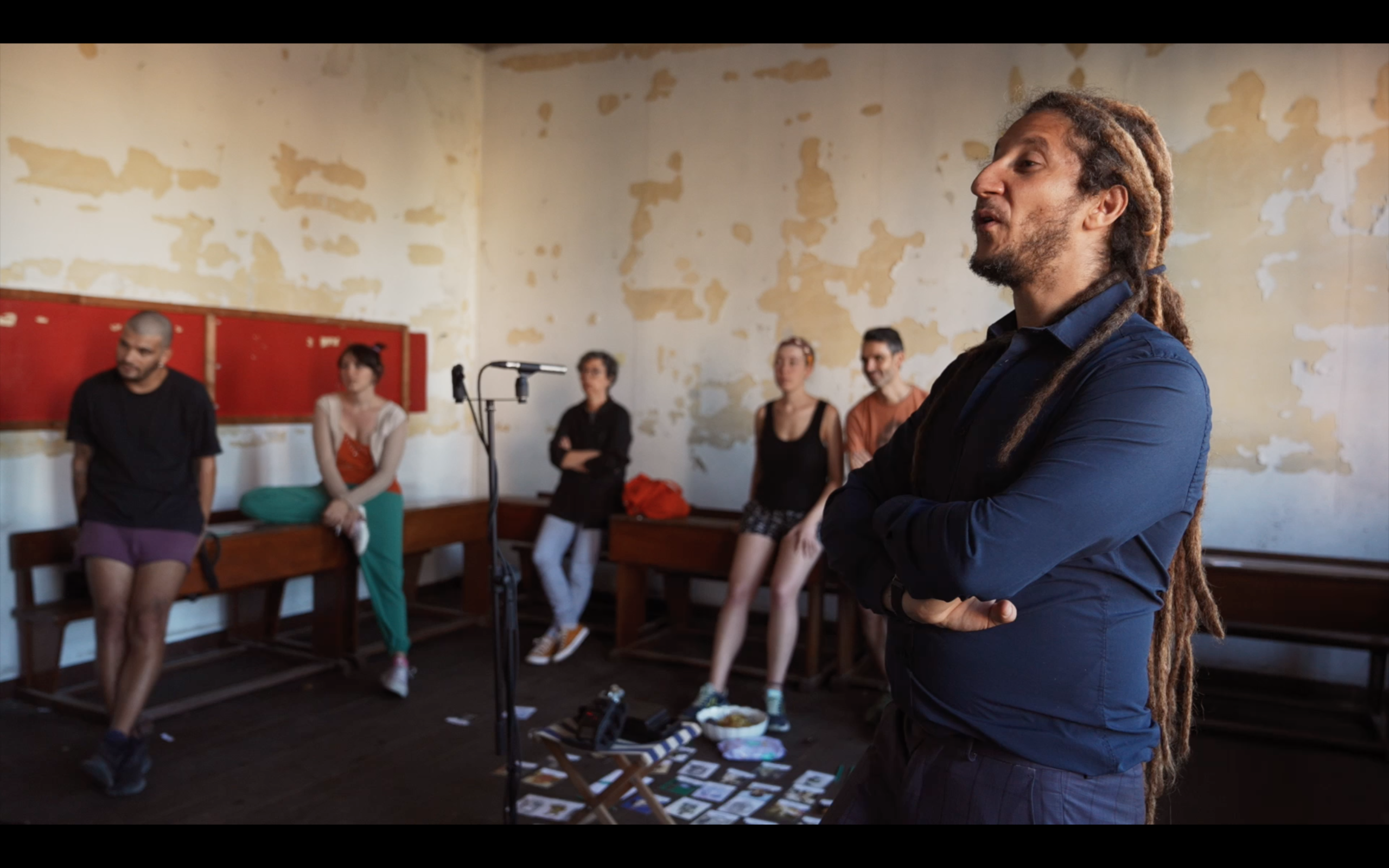 To be the subject,

As the subjects of the stories,

Being the actual subjects of the stories

Created by Filippo Riniolo for Mahalla Festival Palimpsest, Attempt of a Poem is inspired by an epic genre called “nostos”; a well-known literary genre from the Age of Heroes, with one of the best-known of the genre being Homer’s Odyssey and Virgil’s Aeneid. With the aim of reinventing an alternative appearance of the Trojan Horse, the workshop was devoted to organizing a ‘queer nostos’ — a new narrative and a joint poem to produce and perform in order to unchain the story of Troy from war as un-waring Troy, through a choir with the contempo-queer art communities living in Kurtuluş.

Riniolo is recalling the significance of the oral tradition by drawing an analogy between the present and 1200 BC (post-Trojan); a period in the Mediterranean region, when the civilizations like the Mycenaeans, Egyptians and Babylonians, and many others collapsed due to the natural disasters and wars over resources, implacable foreign threats and festering internal troubles. Even though the collapse is described as a “fluid” event, Hekla’s[1] eruption that took place in 1159 BC doubles the collapse. Attempt of a Poem was an invitation to revisit a part of this period, just before the collapse – right after at the end of Trojan War (1200 BC). Effects of eruption resulted in an 18-year period of climatic cooling which in its turn caused famines and various epidemics; the entire political structure, technology and society perished, but the memorable poems remain;

Rais’d expectations in our longing hearts:

Unknowing as we were in Grecian arts.

Every time we remember things, it is related to how we have remembered them before. Repetition and difference in the areas of expression with sensory perceptibility, as well as each recollection adds a new layer to the story.

Language is a living organ, organized by its environment. The transformation of well-known stories survives through languages, yet nothing can stay as solid as the myths. Myths contain flexible elements that allow transformations of representations that do not require an inquiry into whether they are true or not. Myths can be reshaped by the tongues and the spirits of the time – they’re queer.

Even though today we read in silence rather than listen— or we type rather than speak. Lexically, ‘Poetics’ relates to speaking well. Contextually, poetics were circulated between the geographies and powered the beliefs of the periods – with their own unique palimpsests. While it has been discussed for centuries whether the Homer’s Iliad[2] has been written or not, Attempt of a Poem brings focus to the un-writability of the myths. If any “written” myth begins to solidify[3] and loses its mythical value, then what could be the direct act of remembering?

Riniolo works on the body and power, candidly, he uses the power of the body as a material and finds ways of experiencing the art as being bodily. Split in three, workshops are dedicated to emerging a choir. With the rhymes that nicely mediate and create a psycho-active value, singing together is a very powerful form of remembering, this is what choirs are: 4000 years of tradition of a harmonic co-practice – pretty archaic means of bodily expression and as ecstatic as highly solemn. Singing is about the mediation of the body — with the sound of the body — with the pulse and breathing that enable us to listen and to sing. Does what we sing together mean a lot? This is still how stories are transmitted in our very actual ancient super-current, too. Moreover, a choir is the best way of shouting out.

Stories need to change, stories are changed; all the stories are reproduced by each other — over and over as reflections of continuous collective consciousness. As vibrantly discussed in queerspheres[4], all the controversial and mostly patriarchal narratives that we carry on our backs need to be redeliberated and reclaimed. Nowadays, we see examples of the mainstream pop triggering the same exact thing in many accessible ways. Likewise, isn’t mythology a huge cauldron of gossip? – As things stand, the kingdoms of the era seem to be ruled in the bedroom… In ancient Greece, Helen meant sexuality.

Three hours of sessions processed by walk&talks, readings, writings, singing and acting. Timeline is split into 20-to-40-minute sessions with 10 to 20 minutes of breaks.

Location: Kurtuluş Rum School, in the 6th-class on the 3rd floor.

Ode, 3 parts: An ode is a short lyric poem that praises an individual, an idea, or an event. In fact, the word “ode” comes from the Greek word aeidein, which means to sing or to chant. Odes are often ceremonial, and formal in tone.

The aim of the session is to give a start to the story; inventing the pilot along Kirke says “When I was born, the word for what I was did not exist.” and reminds us the patriarchy is also a narrative to be transformed. Previously, women were relegated to a couple of lines in between the stories about male heroes and were often described through misogynistic and objectifying language. The session discovers the gender experience in the ancient world within the context of οἶκος (oikos, later “eco” – “home”).

Summary of the session: İphigenia runs away from the planned sacrificial ritual that her father tricked her into so she would marry to Achilleus. The holy monster Minotaur, the damned monster Skylla and Sirens help her to go Kirke’s island Aeaea. Poseidon gets hangry[5].

Strophe (from Greek στροφή, “turn, bend, twist”) is a concept in versification which properly means a turn, as from one foot to another, or from one side of a chorus to the other.

Antistrophe (Ancient Greek: ἀντιστροφή, “a turning back”[1]) is the portion of an ode sung by the chorus in its returning movement from west to east, in response to the strophe, which was sung from east to west.[2]

An epode[1] is the third part of an ode that follows the strophe and the antistrophe and completes the movement.[2]

At a certain point in time the choirs, which had previously chanted to right of the altar or stage, and then to left of it, combined and sang in unison, or permitted the coryphaeus to sing for them all, while standing in the centre.

Summary of the session: İphigenia, Minotaur, Skylla, Sirens and Kirke decides to stop the war and ask Thetis for her wise advice. At the other side, Odysseus meets with Athena to ask the same and they also go see Thetis but find Agamemnon. When all of them meet in Troy, İphigenia turns into a unicorn and comes with a rainbow.

Tiresias, the blind prophet, reminds us… In the lands surrounding the Mediterranean, there have always been earthquakes, famines, droughts and floods, and in fact, the dark ages of sorts were recurrent… we have now entered a new historical phase in terms of the two-way relationship existing between the climate and humankind. During the session, participants foretold about the future anonymously.

Summary of the session: Visions for future are dark, they concern all of the hearts. Poseidon’s anger put the sea in danger.

First of all, I would like to say that the workshop you designed for those days when we needed to create something together was quite impressive. There was a unique energy of building a story and expanding, using destruction while doing so, and it showed itself with a warm feeling of embrace from the beginning to the end of the workshop. I think such events are very important. Thank you so much for giving us the opportunity to swim naked together in a pool of  the common history and myths, putting the you-me-she-other distinction aside, the value of our shared production is too great to describe.

Even though I need to give feedback for the structuring purposes, sharing the working papers a few days before the workshop would have made it easier to find the common ground. I personally spent the first hour in the stupor of understanding what we are doing, my fascination growing together with understanding. I would have liked using this process more efficiently. Finally, I have experienced that doing some breathing exercises in such events is very effective in bringing everyone to the moment they are in. I think that maybe designing a small awareness work like this can add value to the workshop. I conclude this feedback article by stating for the last time how productive and impressive this event, for which you have worked, was. Endless gratitude for all of them. If you have a plan to organize similar events, I would like to take part in the organization voluntarily.

[1] A stratovolcano in the south of Iceland.

[2] The discussion of Homer begins with Plato, but Plato does not break the ground by seeing Homer as the basis of the education system he does not like. Not only Athens, but all the Greek states adopted Homer as a kind of the holy book, as the essence of all knowledge. Greek people consulted Homer’s epics to learn various information, whether religion, politics or military service, sailing or medicine, or rather, they used to carry these epics, which they knew as an epic from a to z, like a living library (translated into eng. from Homer’s İliad, Prolog – Azra Erhat, İş Bankası Yay).

[3] Around the waters of the seventh century, the Homeric epics were brought to Greece from Ionia. This word “brought” is important; Although the sources differ on who brought the epics, they all agree on the word “they were brought”. It was decided that the epics of Homer would be read — and only these epics would be read on the Panathenaia Feast, the biggest festival of Athens, and with this decision, of course, Homer entered the state religion and education of Athens. One of the claims of the Roman orator Cicero, which is not mentioned in any other source, is that “Peisistratos was the first to organize the texts that were in a complex state and put them into the form we have.” This claim has taken hold in our time and has been interpreted to explain many obscure points about the writing of the Homeric texts. It was concluded that Peisistratos had the texts brought from Ionia and copied in Athens; The vulgata we have is a manuscript written at that time. The scribes actually applied the epics written in the Ionic-Aol dialect to the Attic dialect (translated into eng. from Homer’s İliad, Prolog – Azra Erhat, İş Bankası Yay).