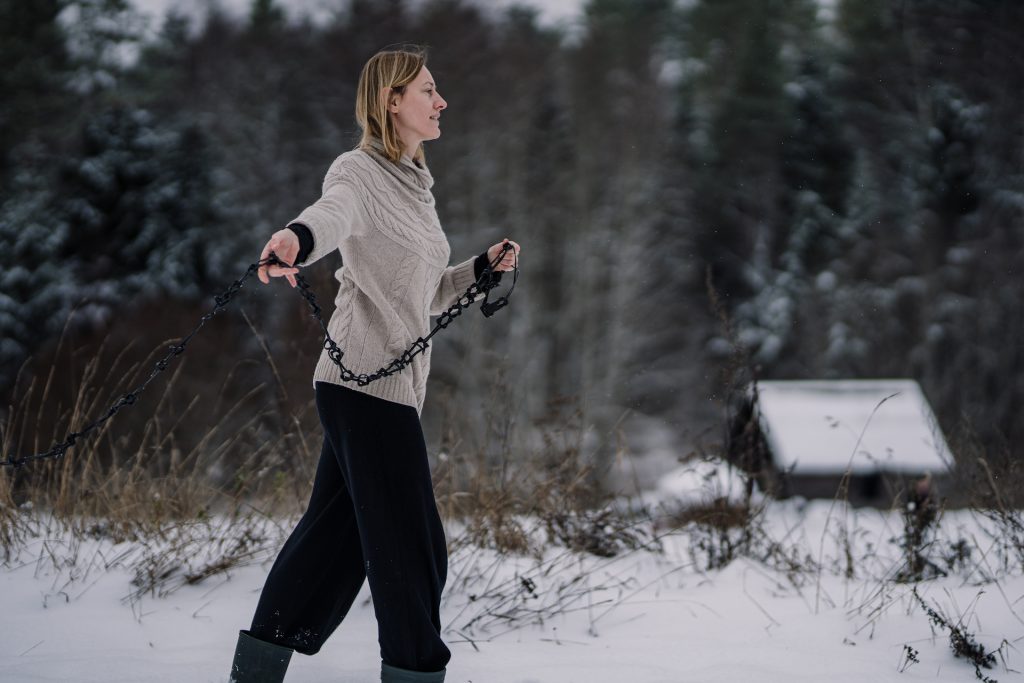 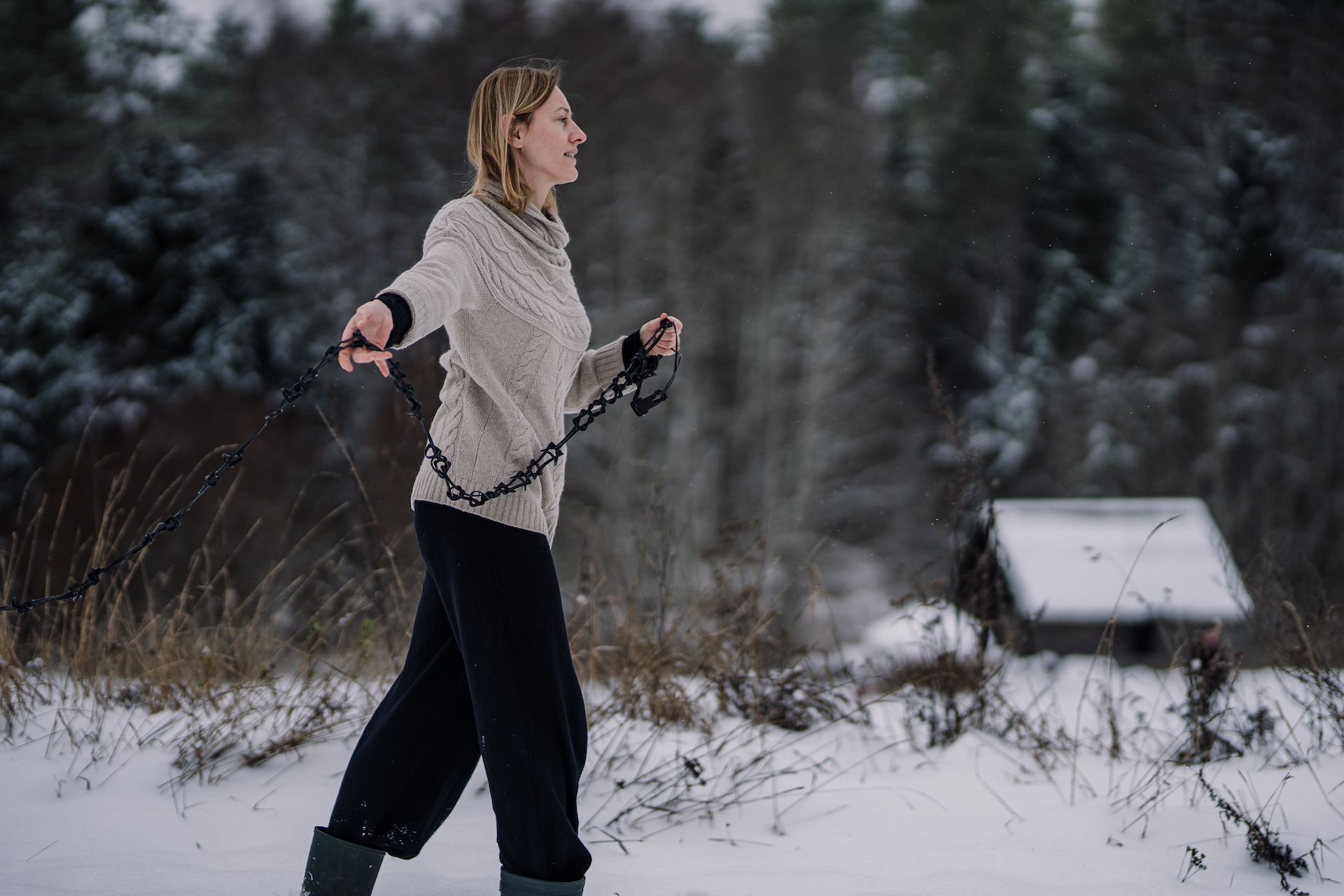 Hosted for residence in the South of Estonia, 2022

Liminality refers to a state of transition between one stage and the next, especially between major stages in one’s life or during a rite of passage. In the context of this collective residency bringing together three interdisciplinary artists within a shared space and time period, sauna represented a site of in-betweenness, a liminality. Traditionally saunas were built on the edge of a human-maintained ground and the forest, the latter representing the wild, the uncommon – a shadow space. Attending to liminality was an invitation to the artists to engage with the unknown, to get lost in navigation – between the position of being an artist and the metaphysical dimension of this experience.

Smoke sauna tradition or “suidsusannakombõ”, as it is known in the local (Võru) dialect, is an important part of the everyday life of the community. In 2014, UNESCO, decided to inscribe the Võrumaa smoke sauna tradition to the Representative List of the Intangible Cultural Heritage of Humanity (many of its work group members we had a possibility to meet). Smoke sauna tradition has been transmitted from generation to generation, therefore, corresponding to the artistic concept of Tartu 2024 European Capital of Culture’s title The Arts of Survival. It refers to the knowledge, skills, and values which we endorse, cherish, share with and learn from Europe standing on the four pillars of uniqueness, sustainability, awareness, and co-creation.

Sauna became the common ground to reflect on the world haunted by the ghosts of modernity, where desire for control, expansion and growth are at the forefront, oscillating with the habitual human necessity for ritualistic cleansing and healing, both physically and mentally. Sauna heating, sweat bathing, cold water immersion, whisk whipping, ash cleansing, under-the-smoke meditation, but also storytelling became the components learning from the intangible.

The residency was situated at the technological farm Maajaam and took place during the darkest time of the year, in November – at soul’s time as we call it in Estonian. The landscape of rolling hills became covered with fresh snow – as if the body and soul ‘purification’ were in sync with its surroundings. Artists had an opportunity to meet and learn from and with the community members such as Maajaam’s team Timo Toots, Mari-Liis Rebane with their families, one of them located at alpaca and sheep farm Ponimaa, Eda Veeroja for two different sauna sessions at Mooska farm in Võrumaa county, artists Toomas Kalve and Epp Margna for a family heated sauna experience, astronomist Indrek Kolka at Tartu observatory in Tõravere, Setu folklore researcher Andreas Kalkun at the Estonian Literature Museum for an archive visit, and additionally different art professionals and venues in Tartu city.

Extract from the artist Gary Markle’s residency log gives an insight to various encounters with the community members:

Eda’s sauna was perhaps the most challenging space for all of us. Very important to be able to receive the instruction, knowledge and unique point of view that informs Eda’s philosophy of Smoke Sauna culture. The Sauna is treated respectfully as a member of the family. It is a place of experiencing the full and unbroken cycle of life and death. Practical and magical wisdom abound in this timeless space. Healing and contemplation are balanced with aspects of the art of survival.

Visiting a farm to meet Tiiu and Kalev and their furry friends. Visited their greenhouse and bought fleece for felting. Sharing stories and getting rooted in the region materially.

Amazing site visit and guided tour of the Tartu Tõravere Observatory. The stone mosaic cosmological map was a highlight from the visit. The narratives spoken from the stars connect with the experience of the 20-hour meditation under the smoke at Eda’s smoke sauna.

The cave-smoked sauna and overnight stay at this creative rural home was interesting and very different from the more instructional and meditative experience at Eda’s smoked sauna.

It was important that both Epp and Toomas took time to share their work and creative spaces with us. It was an interesting contrast to be included in a family style smoked sauna, with its own unique habits and culture.

Laura Põld is an Estonian artist whose work explores environmental history, elemental human and more-than-human skills and needs, including community, safety and shelter. In her latest work, she focuses on her choice of materials and their historical and political context, implementing traditional crafts and building techniques in ceramics, embroidery and weaving, which interest her as preservation of stories, memory and skills. Laura brought her half-finished artwork “Outlook” to the residency. The work embodied natural and man-made elements embroidered on black fabric. It was interesting to witness how the smoke sauna experiences started to inform Laura’s further process manifesting in materials, shapes and colours. After her first visit to Eda’s smoke sauna, smoky grey woollen yarns “appeared” on her desk. Laura had previously joined the visit to alpaca and lamb farm Ponimaa to get introduced to local materials. Using the metal rings she had brought, she created rings stitched to the fabric – smoke rings, somewhere above the horizon of the landscape. Additionally, it was intriguing to hear Laura’s reflections on how the smoke sauna preparations and process resemble her ceramic and pottery oven – kiln. Working with clay and the creating ceramic sculptures and installations is one of the main mediums and techniques of Laura. Within that process, artists collectively made an effort to heat the oven and take care of the temperature within a certain time range. Laura also remembered a smoke glaze method she was introduced to in Latvia that brought questions of its origin and possible connections to smoke sauna. The piece ended up being the most dynamic one in her show (exhibited at Kogo Gallery, Tartu) simultaneously communicating ideas on process, dynamic vs staticity and shelter – facilitating a place to slow down and perhaps even sit down.

Gary Markle is a Canadian artist, researcher and educator based in Tallinn, and Helsinki. He uses the lens of expanded fashion to examine the narratives of (be)longing in more-than-human worlds. His approach is connected to his education in fashion and textile wherein craft and materiality plays an essential role. Currently pursuing a Doctor of Arts degree in the School of Arts, Design, and Architecture, at Aalto University, his practice-led design research investigates the question: Do we make craft or does craft make us?

Site visit to the alpaca and lamb farm in Ponimaa provided him with inspiration about the scale: how micro and macro manifests in the local culture, and, additionally, ways of living. The scale also connects with the aspect of time – and in some cases with timelessness we experienced at the sauna and during the 20-hours-long meditation. Is it possible to experience the same quality of timelessness when allowing yourself to be shaped by craft?

Alpaca and lambswool fleece played a significant role for him in reconnecting with the craft-felting process after 40 years (initially learned in Canada). His project switched from a sauna suit to oversized sauna hats – though the project remained unrealized due to its scale, the process and material made a lasting impact on his design thinking ending up in a wall piece. The wall piece, as well as several other felted material/technique tryouts currently act as containers embodying the smells and tactility of the rural area (manoeuvre, smoke, etc). Gary finished his residency with enacting a performative photoshoot with his fellow artist-in-residency Anica Huck. The outcome of the photoshoot evokes imaginary images of various storytelling cases we were fortunate to hear from the community members as well as witnesses at the literature museum and archive in Tartu that are specific for keeping the sauna tradition alive.

Anica Huck is a visual and performance artist from Germany and based in Rome. She examines contemporary issues, from climate policies to digitalization. Her interdisciplinary approach derives from previous training and professional experience in the field of geosciences and geopolitics. Her project during the residency was inspired by the ritualistic experience in a smoke sauna, which marks a transformational space between man-made and natural realm. The ‘whipping ceremony’ in the sauna creates a resonance between bodies and space, hereby referring to Hartmut Rosa’s theory of Resonance in terms of quality of human relationships with the world. During her attempt to define and/or enter in the relationship between herself and an environment at a larger scale (through creating sound waves in nature using a leather whip), she documented the traces of the whip and its movement in the snow-covered landscape. The idea of mapping relates to her interest in the Struve Arc which consists of 34 points. The Struve Geodetic Arc is a chain of survey triangulations stretching from Hammerfest in Norway to the Black Sea, through ten countries and over 2,820 kilometres, which yielded the first accurate measurement of a meridian arc. Anica’s work resulted in a definition/documentation of 34 points in space corresponding to 34 pages in a flip book – recreating the experience of compressed time similar to sauna, through the (almost compulsive) repetition of bodily action.

Anica’s residency ended with a series of re-enactments for the photoshoot by trace-making in the snow with the self made whip, and sauna whipping performance with a fellow artist-in-residency Gary Markle – evoking rhythmic imaginaries of the creatures from Estonian folklore connected to smoke sauna tradition.