cosa.cz
Hosted for residency in Tbilisi, 2019 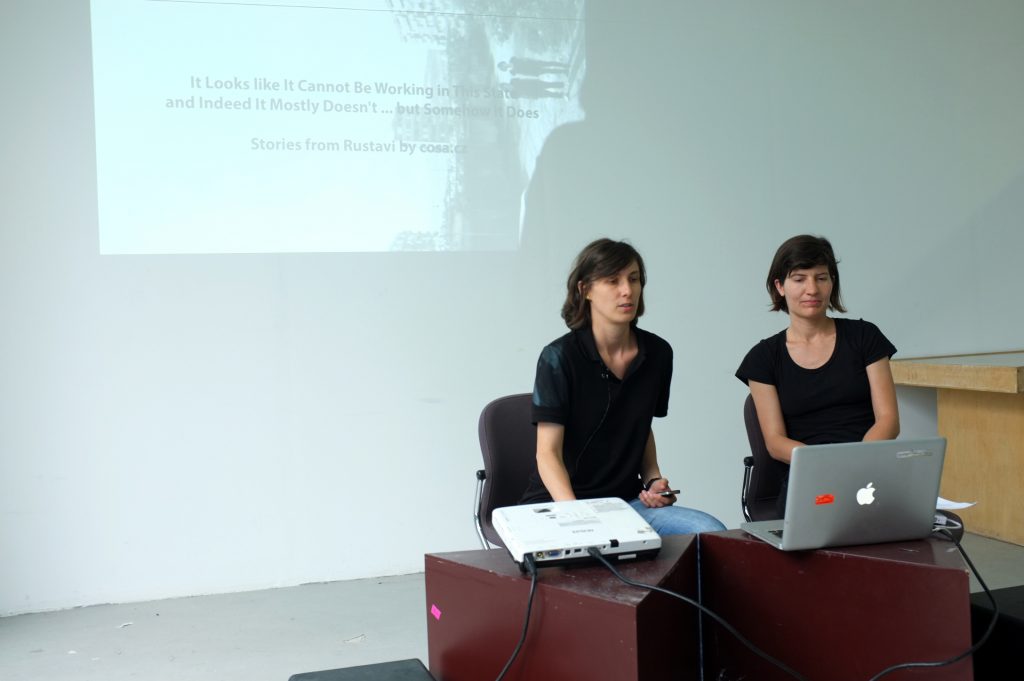 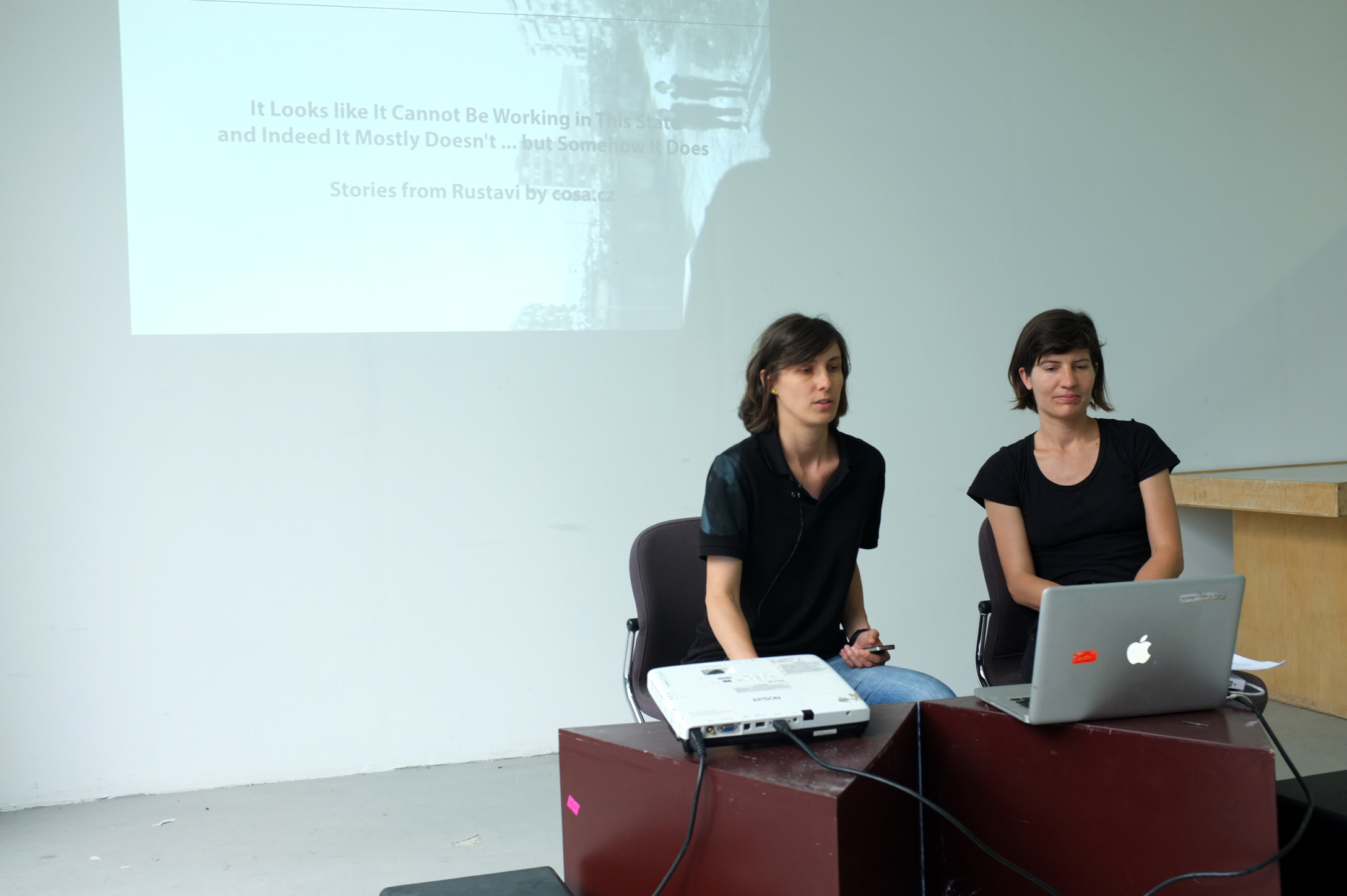 DARE TO SPEAK ABOUT RUSTAVI

Always when we asked for any information about the history of modern Rustavi, we got the same answer (as from Wikipedia): “Rustavi is the newest city in Georgia, built in the late 40’s by Russians and their German war prisoners. The city was built to accommodate people working in the newly built Metallurgical Plant and was an industrial centre during the Soviet era.”

“Yes, but what more do you know? Is there any research or a book about modern Rustavi?”

Sometimes it takes an outsider for us to understand in what a special place we live. Sometimes… it takes two. In the sleeping Georgian city of Rustavi, perched not far away the bustling capital of Tbilisi, two artists dove into, as they called, their Caucasian adventure, and became the main characters of the stories they have brought from Rustavi for everyone to hear.

The first CCA – Center of Contemporary Art – Tbilisi residency of the year within the MagiC Carpets project framework featured the Czech artistic duo cosa.cz (Markéta Mráčková and Barbora Šimonová). The artists visited Rustavi, Georgia, for a 28-day-long residency within 2nd-29th of May.

Markéta Mráčková and Barbora Šimonová met at Emil Přikryl’s School of Architecture at the Academy of Fine Arts in Prague. They have been working as a creative duo since 2013. They founded the cultural cooperative cosa.cz in 2016 to join together their diverse activities – architecture, visual arts, literature and video.

Markéta and Barbora enjoy writing short, sometimes absurd, illustrated stories in which they mix reality with fiction and hope that others will have fun too. They favour a sentence from the beginning of the book Kant and the Platypus by Umberto Eco that is taken from Boscoe Pertwee: “I used to be indecisive but now I’m not so sure.”

Rustavi, a former industrial city purposely built during the Soviet period, served as the context of their residency. Historically, Rustavi is a former industrial city, artificially built on a plain field in the midst of seemingly nowhere, and designed to meet the needs of the metallurgy industry during the Soviet regime. Workers from all over the Soviet Union were settled there with their families. Officially, Rustavi was declared a city in 1948. It is a rather interesting place with its idiosyncratic dynamics, as no cultural and social life could develop naturally, but rather according to the strict Soviet planning with places for recreation and (regime-approved) cultural entertainment. After the USSR collapsed, Rustavi fell into an economic crisis which left so many people unemployed that it became the “sleeping city” – most of the inhabitants would seek and find work in Tbilisi, commute and return to their hometown for sleeping only. The Post-Soviet decade was not kind to Rustavi.

Nowadays, in the Post-Post-Soviet era (as one might call it), Rustavi is getting back on its feet – the biggest second hand car market in the whole Caucasian region is located in the outskirts of the city, so does the Formula 3 track. Besides, the biggest dealership of car parts (which are still manufactured in Rustavi, one of the few branches of factory production still ongoing) Rustavi is also the only place for obtaining the driver’s licence. Therefore, it has become the car city of Georgia. However, the lack of public interaction and cultural events is more than obvious.

We gave the artists the freedom to choose whatever they wanted and to approach the city however they wanted to, as Georgia in general is a place where things oftentimes do not happen as planned and one needs a certain amount of spontaneity. Our main goal was, in whichever form, to counteract the cultural, social and economic dogmatism of the capital towards a decentralized, more peripheric approach, to underline and explore what lies beyond Tbilisi. This should happen through site-specific reactions, emphasizing the process rather than the result – the process of research, re-contextualization, and a certain spirit of adventure to overcome the difficulties of a place as specific – and at the same time, exemplary for the Post-Soviet space – just like Rustavi is.

Barbora and Markéta approached the city in their very own way, by walking around, cycling, and dealing with the complications of Marshrutka schedules, which, as stated above, are rather spontaneous as well. They visited not only Rustavi, but Tbilisi and the mountain regions of Georgia as well – all of which provided a perspective for comparison and contextualization even within Georgia, which is crucial. They processed their experiences in a collection of whimsical short stories and comments (and their respective visual material), which blend fact and fiction and present a new, magical perspective on a city generally depicted and received as grey and abandoned. They are based on authors’ day-to-day experiences, observations, descriptions, work and unusual troubles.

The presentation of the results and final event of the residency took place on May 25 in cooperation with the Contemporary Art Platform OBSCURA at the Stamba Hotel in Tbilisi, Georgia, under the name “It Looks Like It Cannot Be Working in This State And Indeed It Mostly Doesn’t … But Somehow It Does – Stories from Rustavi by cosa.cz”.

Their stories will be printed and when published, they will serve as a reminder of the magical, sometimes curious nuances of our everyday environment for the people of Rustavi, of Tbilisi and Georgia in general – to keep an open, adventurous mind and be sensitive to one’s surroundings, as absurd as they might be.