“Guests” by Ona Juciute
Hosted for residency in Istanbul, 2022 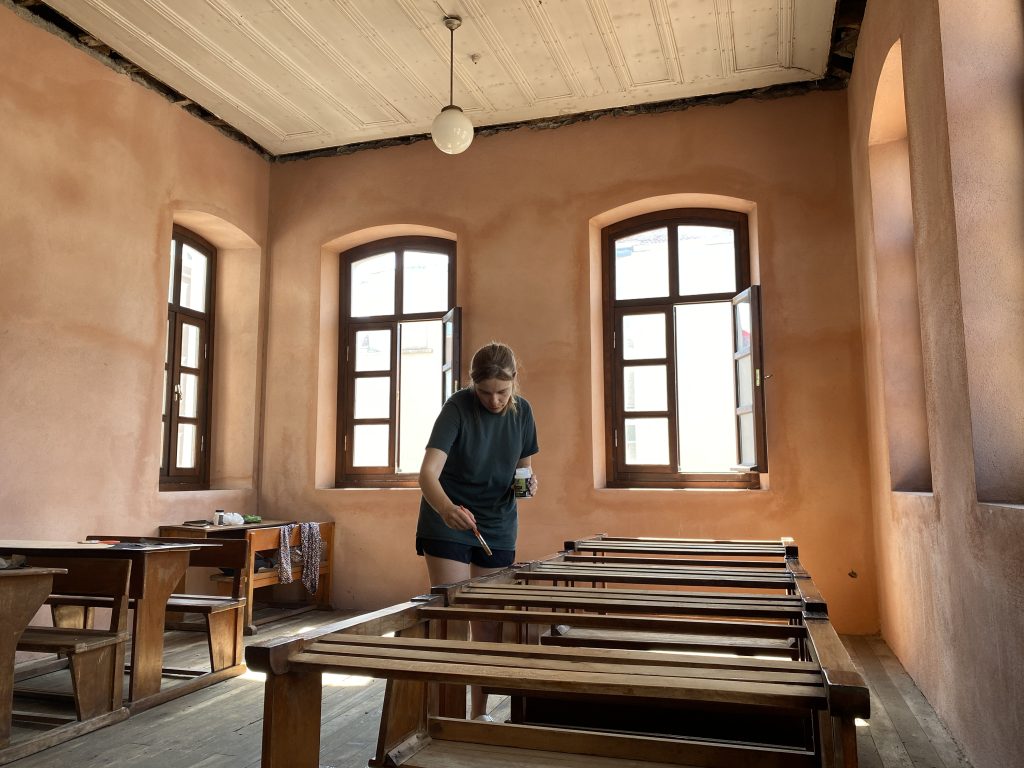 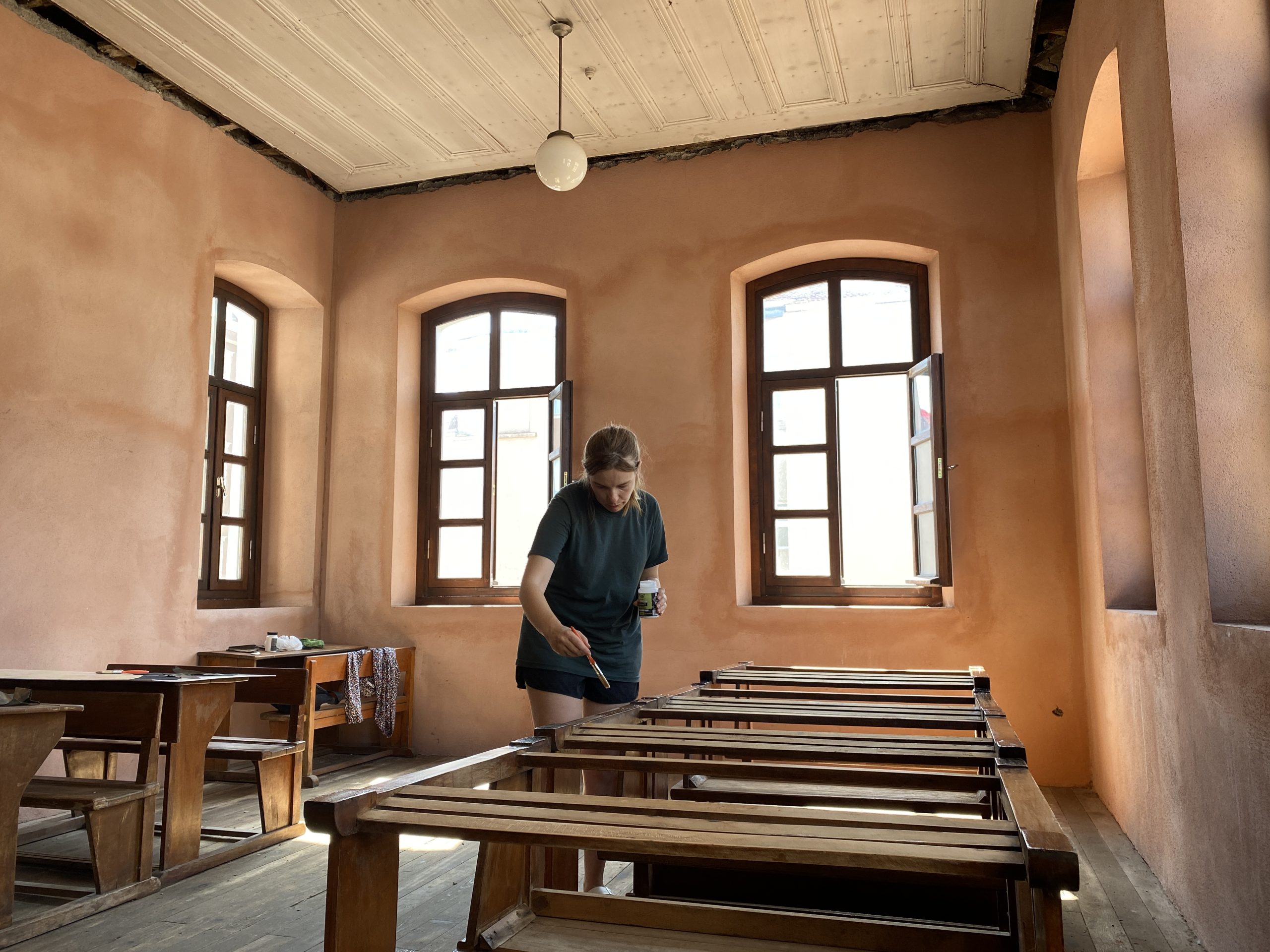 You know the artists whose silence radiates confidence. Ona is one of them. Licensed political science artist, born in Lithuania, teaching at the department of Sculpture, Vilnius Academy of Arts.

In her practice, she reflects on how things are produced today. Gesturing with machines, discussing the ingredients, she marks on preservative processes and the circularity of substances. Symbolism, she says, is the most uneccessary. Really, why do we try to remember things by substituting them?

We are oscillating up and down the long Kurtuluş street. The venue of Mahalla, Kurtuluş Greek Primary School, has a history of 150 years. It is located at the end of the street, behind Safa Square and the church, on the Firefly Street. The school as a venue has started to open its door to events since a major renovation in 2014 and its restoration continues ever since. The place is somehow a school even though it’s not. The place is reminding me that I am not the only second-wave immigrant child educated in an old Greek school with a new name. The emptiness of the classrooms, my breath, a lot of dust, but no smell. Warm, but gray. Next to this faded burgundy color, under the dark wood benches, are the parquets that have been drawn for years. Ona prefers to move things rather slowly so as not to scratch on the floors.

After a few days spent quietly at the teacher’s desk, I saw Ona reversing things. Nothing seems strange at all. After a while, by catching her work, my horizon shifted better. That was the sense of reality where what you see is not what you get.

Desks upside down. Ona is sanding to varnish those exact sides that kissed the floor for years. What kind of a pedicure is that? Strange way to play with time. With the windows open, dust is whirling around. In the meantime, our negotiations continue; we need a permission from Mr. Ömer to varnish – varnishing the only unvarnished parts of the desks; their feet. Ömer Bey is the school’s caretaker and carpenter. He accepted. It’s only varnish after all.

At the left side of the class, a window is opened. It’s a nice window that sees the stairs going to the garden. Ona wants to imply an alternative route for the class and she wants it to be encouraging. Although when we shared it with Ömer Bey, the idea was rejected, initially, he said, “nobody can take this window”. We end up saying that we’ll stop people. He accepted, even making the ladder with his own hands.

Stepping up or down, refers to movement itself, that is, double-faced wall-kissing steps make a palimpsest. Apparently, concrete stairs outside were added to the building later; there are marble stairs to the first floor, but these ones coincide with a period of increasing student density at school, perhaps?

We are up on a carpet. Not only magic, but pacing, down to Feriköy, all the scales are shifting. I remember how I had no idea about this place before these buildings. Amazing angles, big portions of sky, very dynamic landscape. Big roads, down there, little little, too many windows. How big is that city? We make jokes about the ambitious aspects of Istanbul while walking on the road; The towering cityscape before us makes us pause. We stop by the markets in Feriköy to meet with displaced secondhand objects. The night market takes place from 10pm, and goes till the other day. We are there on that Wednesday.

Bazaar area is active almost throughout the week. Initiated by Victor Ananias, Buğday Derneği, Istanbul’s first organic bazaar has been taking place for sixteen years. We are there on Thursday, for the eggs. Ona’s work partly includes transiently alive forms as organic matters. While Ona is researching preservation methods and the science or the superstitions behind them, she fastens the garlic on the steps of Guests. Christian tradition refers to garlic as ‘growing where the left foot of Satan steps’. In many other cultures, garlic is seen as protective against evil and therefore placed at the entrances, windows or other cavities. Ona is usually interested in such contradictory yet connecting meanings within her work.

Egg shells are composed on the feet of the teacher’s desk, they stand plain. Eggshells are often placed in religious buildings as apparently they keep insects and spiders away. The fragility of tiny quail eggs forces us to focus: somehow in a gymnastic balance, the key of the part is practice of the blow — not cracked. They are just there as frozen bubbles of calcium.