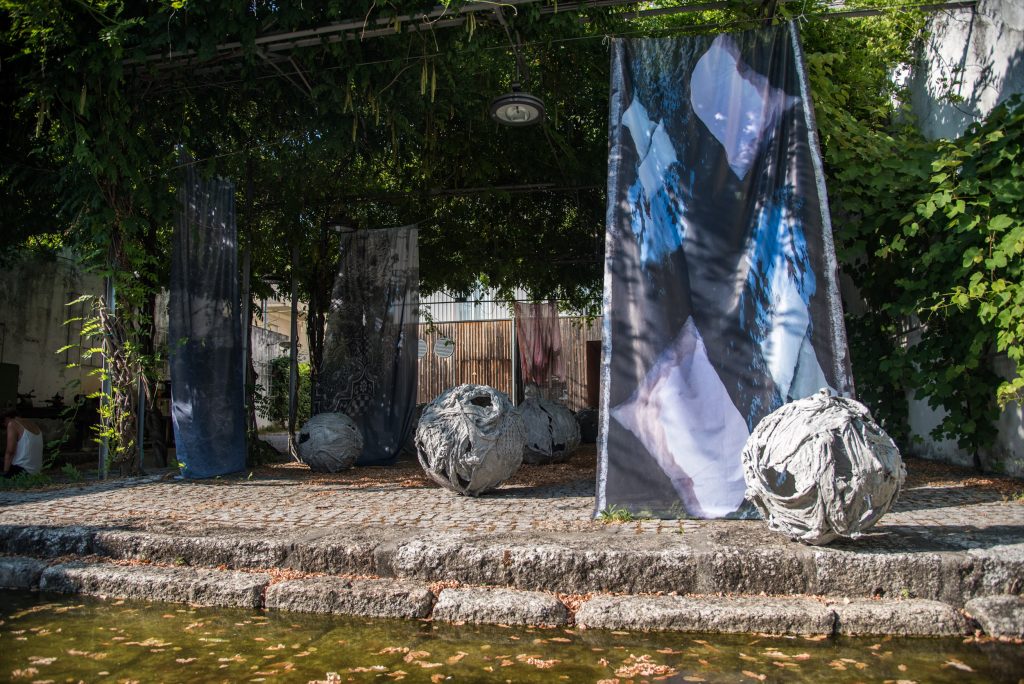 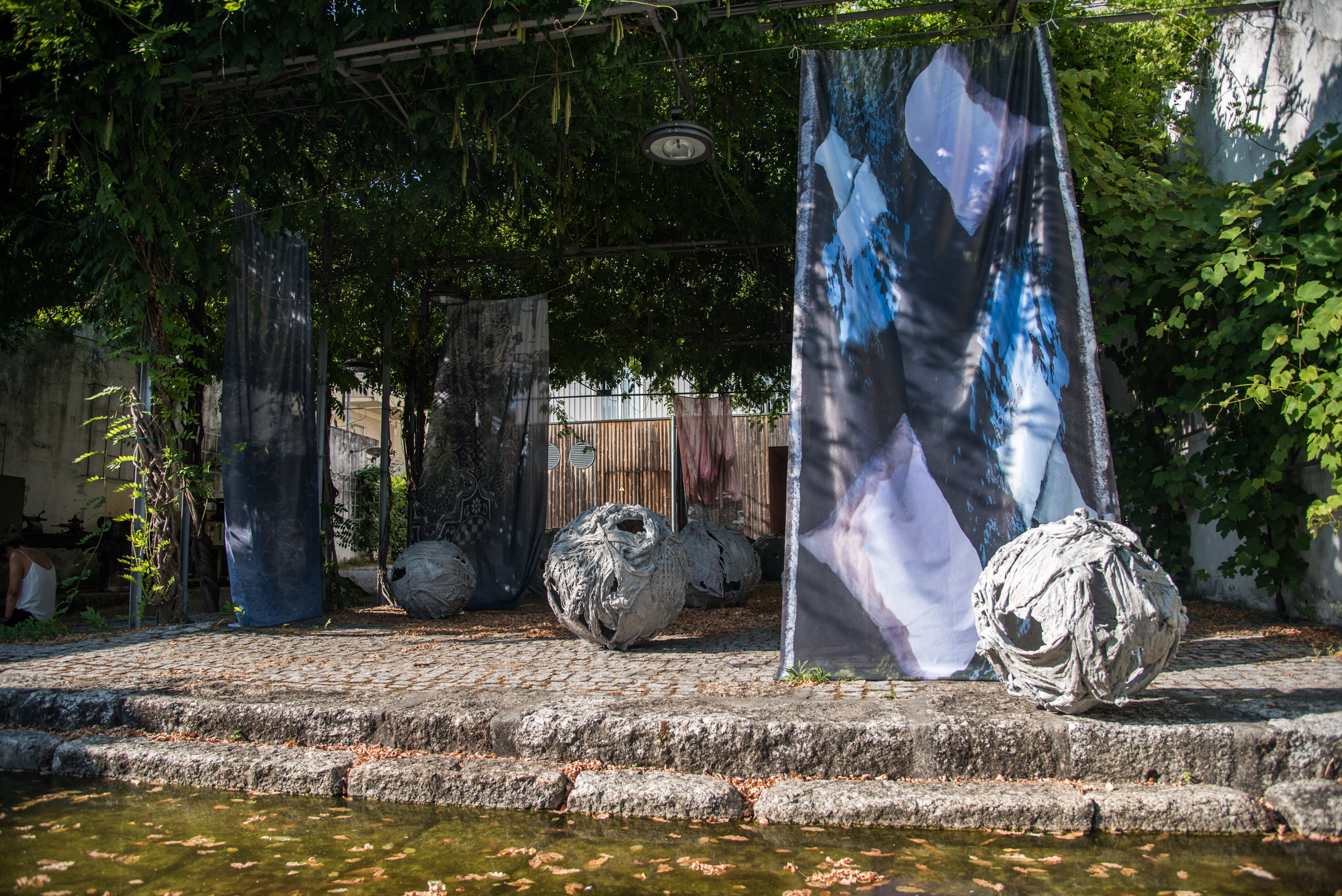 Sometimes it is difficult to see our mundane everyday chores, so embedded in our lives, as something worth preserving or repeating. Putting things into perspective can be helped by outsiders who see things differently and even as an inspiration for the works of art. This is what happened in Guimarães, a town in the North Region of Portugal, where women gather around next to public outdoor washing tanks, tanques lavadoros, bringing their laundry and their stories. The project of British artist-in-residence Hermione Allsopp revolved through an organic process of work, and research made during the residency and through an engagement with this community and the territory and tradition of Guimarães.

Hermione Allsopp makes sculptural work by collecting objects and furniture and re-creating them into new forms or compositions. These are familiar, known, domestic items that have been discarded in charity or junk shops – not, inert materials, but ones that carry collective attachments, memories and meanings. As sculpture, these re-done, or un-done-up objects begin to exist as something else and are intended to raise questions about the value and material nature of everyday objects. Through the choice of objects, and the techniques she employs, she explores the boundary between repulsion and attraction, ideas of taste and notions of desire. The work also reflects on wider topics related to consumerism, psychological and physical interiors and exteriors. 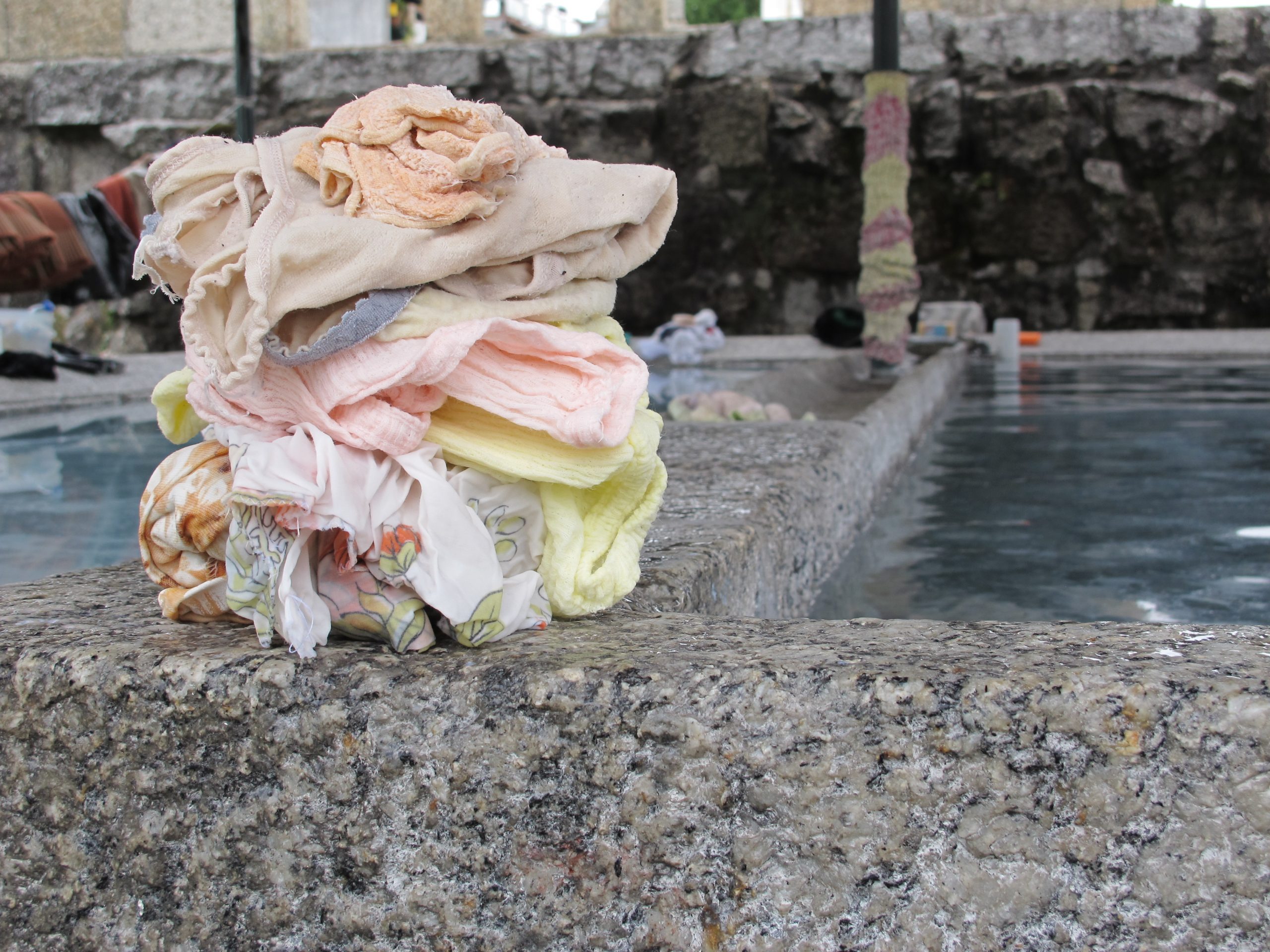 Working in Guimarães, Hermione was making objects from clothes and cement, which reflected the act of washing. The physical structure of these textiles, mirrors the interweaving threads of communication in the historic custom of communal washing and the everyday matters that arose. The spherical sculptures also refer to the cycle and labour of washing, which references both daily routine and wider environment life cycles.

The project started by visiting the women from the tanque community at Tras de Gaia to friends and to find out about their routine. Hermione discovered that they only washed on Wednesdays and Fridays when the water in the tanques was changed by a man named Miguel who has worked there for about 20 years. On the first visit, Hermione was taken on an explorative journey to discover the wider town and situation with the tanques of Guimarães. According to the artist, it was a great way to explore the town and learn more about the importance of the community at Tras de Gaia, as it is the most used of the washing tanques and it is a tradition that is fading out.

The engagement with the women at the tanques and the processes of washing became inspiration for Hermione’s project. She took many photographs and participated in the routine. As a sculptor, she engaged and researched through a material process of making. At the tanques, she became fascinated by the way processes repeat, the labor of washing and the way natural sculptures were made from piles of wet clothes. Clothes were also hung up, draped over bushes or laid out on the ground to bleach in the sun. The tanques, still, quiet and soapy when no one was there, came alive when the community were in action, singing and discussing everyday matters. When they were gone, the clothes left drying become the evidence of what had occurred.

According to Hermione, “Clothes as objects, worn by us, relate to us and speak for us. They relate to our physical form, identity and status. Guimarães is an area that is rich in textile production with many factories producing clothes. For me as an artist, that relates to materials it was important to use clothes in my work. These were largely donated by the people I met around me, the community became physically embedded in my project.” 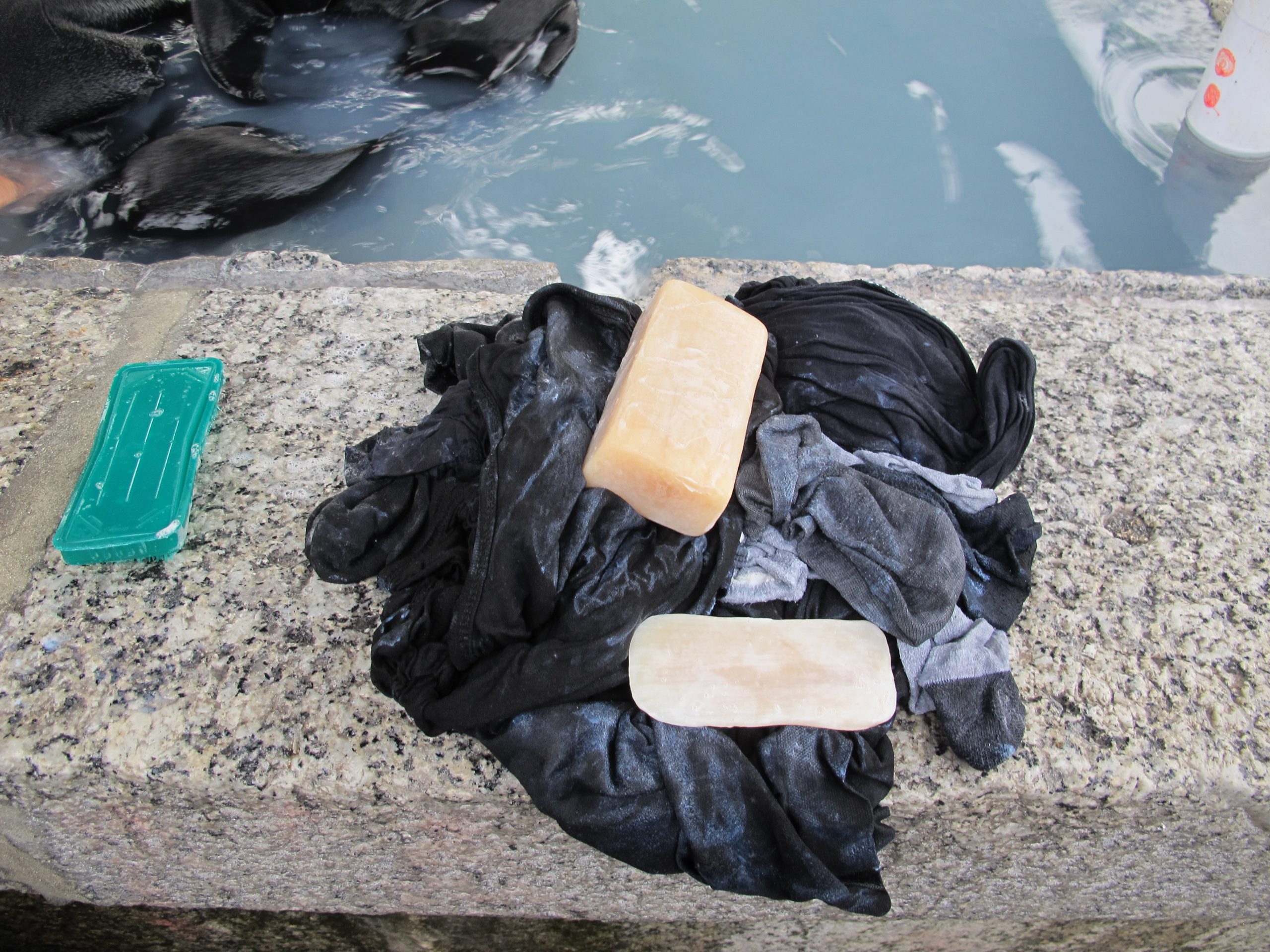 There was a wider project brief for Contextile, this year it was titled In-organic. In combining the clothes with cement, the artist was able to create textured structures in an organic way that responded to the actions of the women. The use of cement was also related to a saying that is common in England: “don’t wash your dirty laundry in public”, meaning not to talk about personal things publicly. It was interesting that the community of Tras de Gaia did the opposite of this.  Dipping the clothes in cement was like making them dirty, representing matters discussed and the clothes also mingled together like the connective threads of communication.

Hermione’s final installation was a work consisting of 18 sculptural spheres made from old clothes and cement and five large photographic images taken at the tanques, printed on cloth. The project was realised at Casa Da Memoria, a museum of memory, where there is a tanque reproduced, and it was exhibited as part of the CONTEXTILE2018 exhibition. The artist wanted to use the site of the museum as a context for the work because the sculptures became like relics with embedded memories. The simulacrum of a museum context and the placing of the sculpture in a theatrical setting (CDM patio is like a stage) refers to the way we contextualise and read/learn from materials/objects.

The spherical sculptures also refer to the cycle and labour of washing, which references both daily routine and wider environment life cycles.

Hermione claims that it was a fantastic experience to learn from the women and respond to another community, to not just think about the materiality of everyday objects, but also the process and rhythms of everyday existence.

It was interesting to learn that despite the limits in verbal communication (not having a common language with the community), people can still build significant relationships through communal acts such as washing or making.