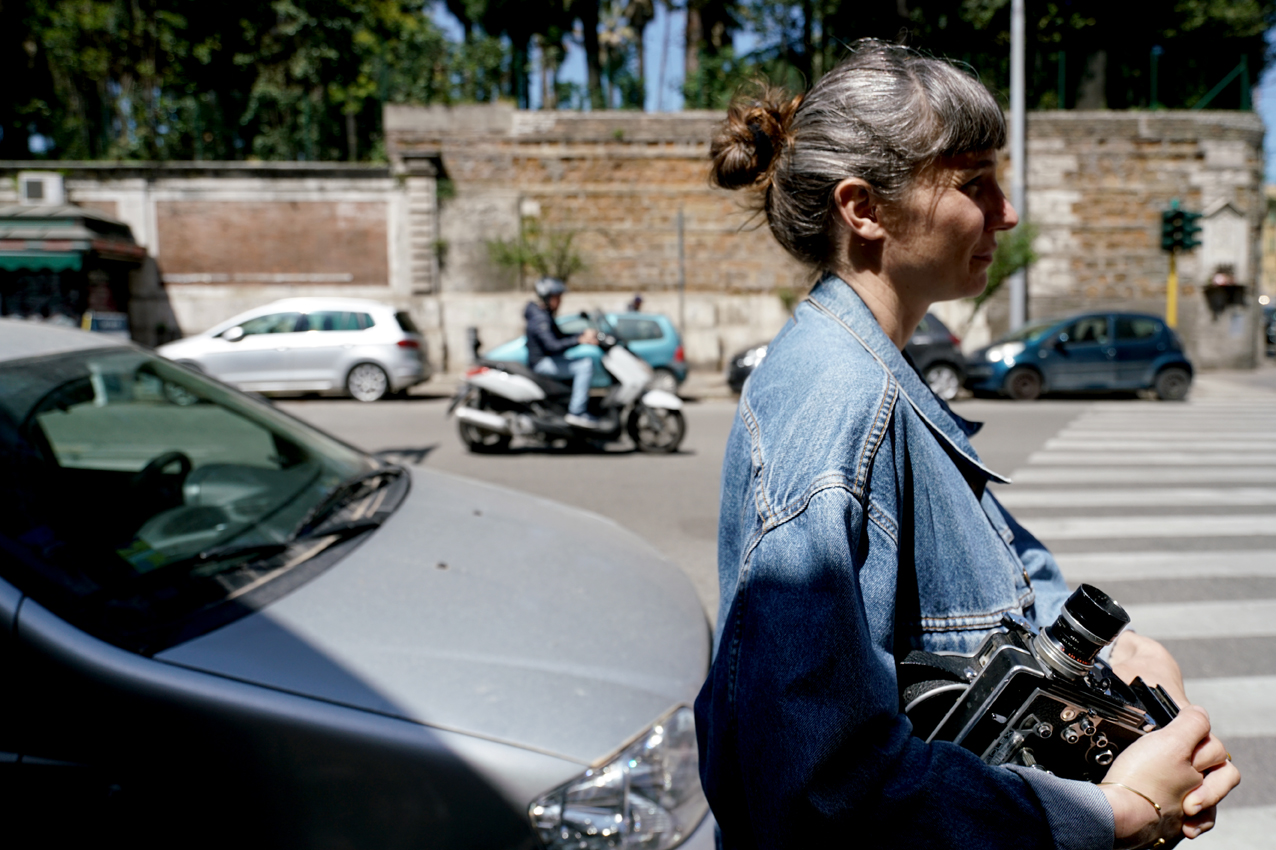 A VOYAGE TO THE MEDITERRANEAN SEA

During her residence at Latitudo, in Rome, Hrvoslava Brkušić carried out a research project in which she mainly focused on the knowledge of this city in its various forms and layers, and its social fabric. The artist wondered if Italy had reckoned with its past, trying to create a dialogue with a 16mm film shot in places that recall the colonial past, the sounds and the faces of contemporary Rome. In a difficult city, disinclined to open itself up to the Other, Hrvoslava tried to place herself in a position of listening, not only hearing, of fixing the sound of those that crossed the sea, returning to the roots, to the heart of the Mediterranean.

Hrvoslava Brkušić (1982) holds a master’s degree in Film and TV Editing (Academy of Dramatic Art, Zagreb) and a master’s degree in new media art (Academy of Fine Arts Zagreb). Her artistic practice takes shape in a variety of media – sound installations, live performances, film, and video. The main idea and interest in her artistic approach is to explore the behavior of sound through experimentation with frequencies and waves in general (especially radio waves, like short waves, UKV, mysterious radio signals, EME communication).

Starting from the history of Colonialism, the artist went looking for the traces it left behind: reflecting on the past, aided by such a diversified urban architecture, she captured sounds and images of Rome, present and past. This city has become a colorful melting pot of cultures and people, often distant and in conflict with one another, who have characterised certain city neighbourhoods for decades.

During her residency in Rome, Hrvoslava had the possibility to discover the art scene of the city and to meet the people who belong to it. She has made a lot of research trips and participated in various meetings and organized a workshop with a local community. She recorded and took pictures of Rome, collecting materials for her final project.

Pursuing the theme of migration and the immigrant who, forcibly or by choice, lives in Rome, the artist, assisted in her research by Latitudo staff, interacted with FOCUS – Casa dei diritti sociali and with the young people that are part of their theatre group. The FOCUS volunteer association has been committed to the defence of social rights for over thirty years: integration, defence of vulnerable people, the right to study, an Italian school for foreigners and medical-legal assistance are at the heart of their daily activity.

In a workshop held on 16 April, Hrvoslava engaged the FOCUS Theatre Group, made up of young people from various nations (Brazil, Peru, Guinea, Bangladesh, Nigeria, Morocco, Georgia). She invited them to share an experience connected to the exploration of sound and vibrations, to “listen” to sounds around them and to remember the sounds and noises of their homelands.

The project aimed for the involvement of communities that often live on the margins of the city. Constructing unifying identitarian discourses, based on representative selections of a society, therefore, lead to the exploitation of the other. Hrvoslava’s work is focused on understanding the other, setting up a dialogue that can cross language barriers. When one person enters into a relationship with another, with others, these relational aspects are used, and one must be aware of this. It is within this complexity that we must ask the question: how do we pursue a pathway of coming together? With the workshop, Hrvoslava tried to establish this contact, starting with sound itself and dialogue, which are at the base of interpersonal relationships starting from childhood.

The final exhibition and presentation of her project took place from the 19th to the 22nd of September 2018, featuring work by Hrvoslava and Melanie Garland, another artist-in-residence. Since their work has offered different approaches to otherness, they complemented one another and presented a complex and in-depth view to the matter.