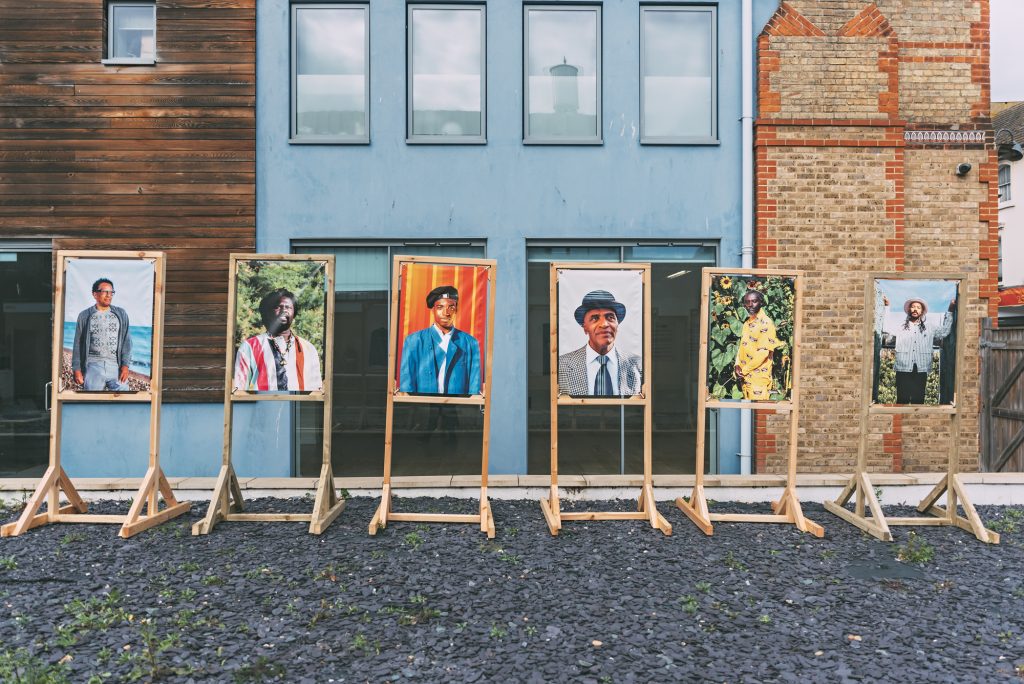 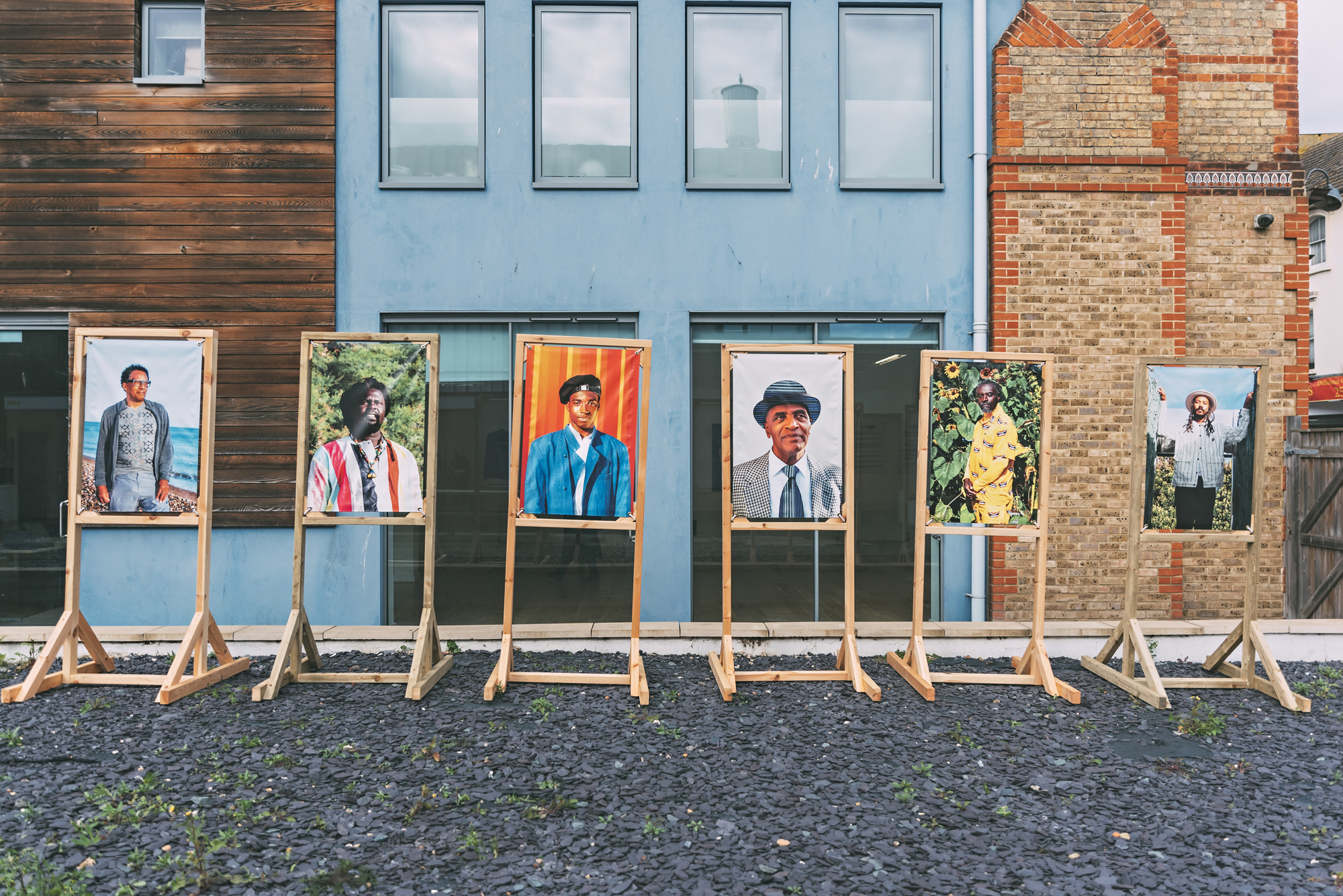 As part of the third year of MagiC Carpets, we invited a group of local art practitioners and activists, Lee Desai, Aida Silvestri and Leah Thorn to be part of the Festival of Looking 2020 programme who were also key organisers of the Black History Month Folkestone programme 2020. As a response to the Festival of Looking theme ‘What’s happening, exactly?’, these projects went under the surface of the racial and societal issues around us and asked us all to think about what we can to do address them and make moves to form a more open and inclusive society. Folkestone, and most of the world, is made up of a community of people from diverse backgrounds and this is something only to be relished and celebrated.

I first spoke with Aida Silvestri, an artist with a background in photography who has been living in Folkestone for the past 3 years, about the beginnings of her project I AM Fully Human. I already knew Aida and her work and the important part that collaboration, story-telling and journeys play in her practice. Her previous projects ‘Why Folkestone?’ and ‘Even This Will Pass’ both focused on the individuals living in Folkestone and in the UK and the journeys they had each taken to reside in the same place. Questions around belonging and identity are raised, and I thought this was not only a key connection with the MagiC Carpets concept, but also a key issue people have contended with in the past and continue to contend with today.

Aida’s approach to this project was similar to some of her other projects; she wanted to involve as many people in the work as possible; to share their stories; to celebrate the individual and to create a greater sense of community. Aida, collaborating with Lee Desai, reached out to black men living in the community and took their portraits. The original plan was to install the work inside the Brewery Tap UCA Project Space but due to health and safety issues around the Pandemic, we installed the work outside the building in life-size, free-standing wooden frames. The portraits faced the street and people would encounter them as they passed by as they carried out their daily routines. The work was full of joy, celebration and solidarity; the vibrant colours standing out against the grey, autumnal backdrop.

In Aida’s own words ‘the work aimed to challenge the stereotypical views which have obscured the images of Black men for centuries and explored the image of a Black man through portraiture and fashion. Racial and class inequalities, systematic discrimination and the media have contributed to a distorted portrayal of Black men, in which they are pathologized. Black men’s real lived experience and achievements are underrepresented and overwhelmed by the representation of them as perpetrators of violent crimes. George Floyd’s death, and subsequent Black Lives Matter protests, have instigated a ray of solidarity and hope around the world and have exposed the racism experienced by Black people. In light of these protests, how can we encourage Black men to reclaim their true identity and create their own narrative?’

Spoken Word Poet Leah Thorn’s work Visible. Invisible was another of the works supported by MagiC Carpets this year. This was a sound piece comprised of 5 voices of White Women in committed relationships with Black Men in Folkestone. These were Diane Mae Bundy, Rachel Lilly, Jes Phillips, Leah Thorn and Sjoukje Gummels. This recorded conversation was played outside the Brewery Tap UCA Project Space, alongside Aida’s portraits, and could be heard by passers-by on the street. They discussed white privilege, taking up and making space, relationships with Black Women, exposure and maintaining privacy, shame and defensiveness, being mothers of Black sons and the impact of racism on their relationships. They were asking themselves, and others, ‘What is OUR work as white women?’ to combat racism. The work was full of emotion, concern, and love, and was important perspective to be told and to be heard.

Leah also ran an online workshop called ‘White Noise’ which was an expressive writing workshop for White Women. Using techniques including flow writing and collaborative writing activities they explored issues including white identity and privilege and the ending of racism. This project follows a long line of projects that Leah has produced working with women including ‘Older Women Rock!’, a project which was born out of workshop Leah led using poetry to explore the life experiences of women in their 60s.

Another project Black Men Are…, which came in the form of a panel discussion and live Zoom conversation, was organised by chef and activist Lee Desai. Through conversation, six local Black men came together to discuss the experiences of the black male in the UK today. They discussed how assimilation and appropriation are tools which have been used, for better and worse, to mould predetermined roles and stereotypes of Black men, placed on them by a broader society. They asked themselves ‘Do we as a society continue to uphold these stereotypes or do we move forward by giving Black men the space to spearhead their own narrative?’

A trailer of the film was shown of a large flatscreen through the front window of the Brewery Tap UCA Project Space 24 hours a day so that people walking past could stop and watch at any time.

This poignant conversation was then shown as part of a live Zoom event and gave the people involved, as well as others joining the conversation, to respond further to the topics raised. Sandra Drew, Arts Consultant and Curator, attended the Zoom event and commented: ‘There was sadness, anger, fear and so much humour, laughter and genuine camaraderie amongst them which was inclusive, relaxing and enabled quite difficult and uncomfortable things to be said and, more importantly, heard.’ The conversation hosted over Zoom was a great success, with over 40 participants, and enabled people in different location to come together for this fundamental and overdue conversation.

The fact that the physical install of these works had to be re-thought and moved to an outdoor installation ended up being a positive as the relationship between the works and the viewer was made public. The works had even more of a presence and could be seen by everyone; drivers by, people of the bus, people living across the street; they were embedded in the town’s landscape.

Sandra Drew said that ‘These are the tiny steps that we must keep taking to change that culture, to calm the fear of ‘other’, to open our eyes so we see humanity, not race that cultural construct which can no longer be tolerated in a civilised society. These Black History Month Folkestone projects investigating aspects of Black Lives in Folkestone are important beyond words and are serious contributions to a national artistic and cultural dialogue.’