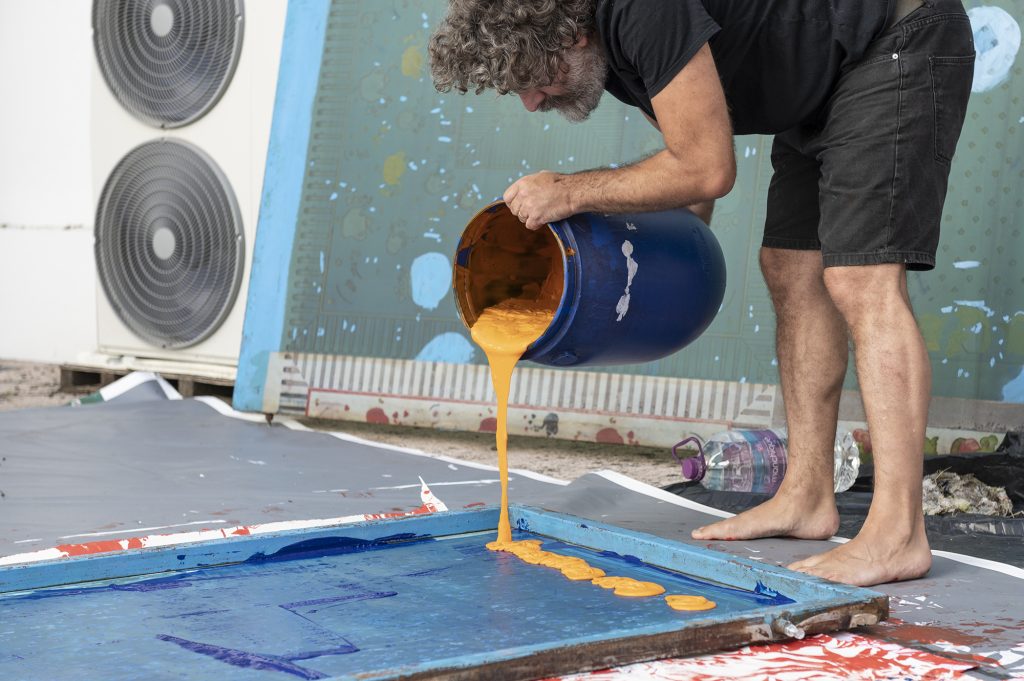 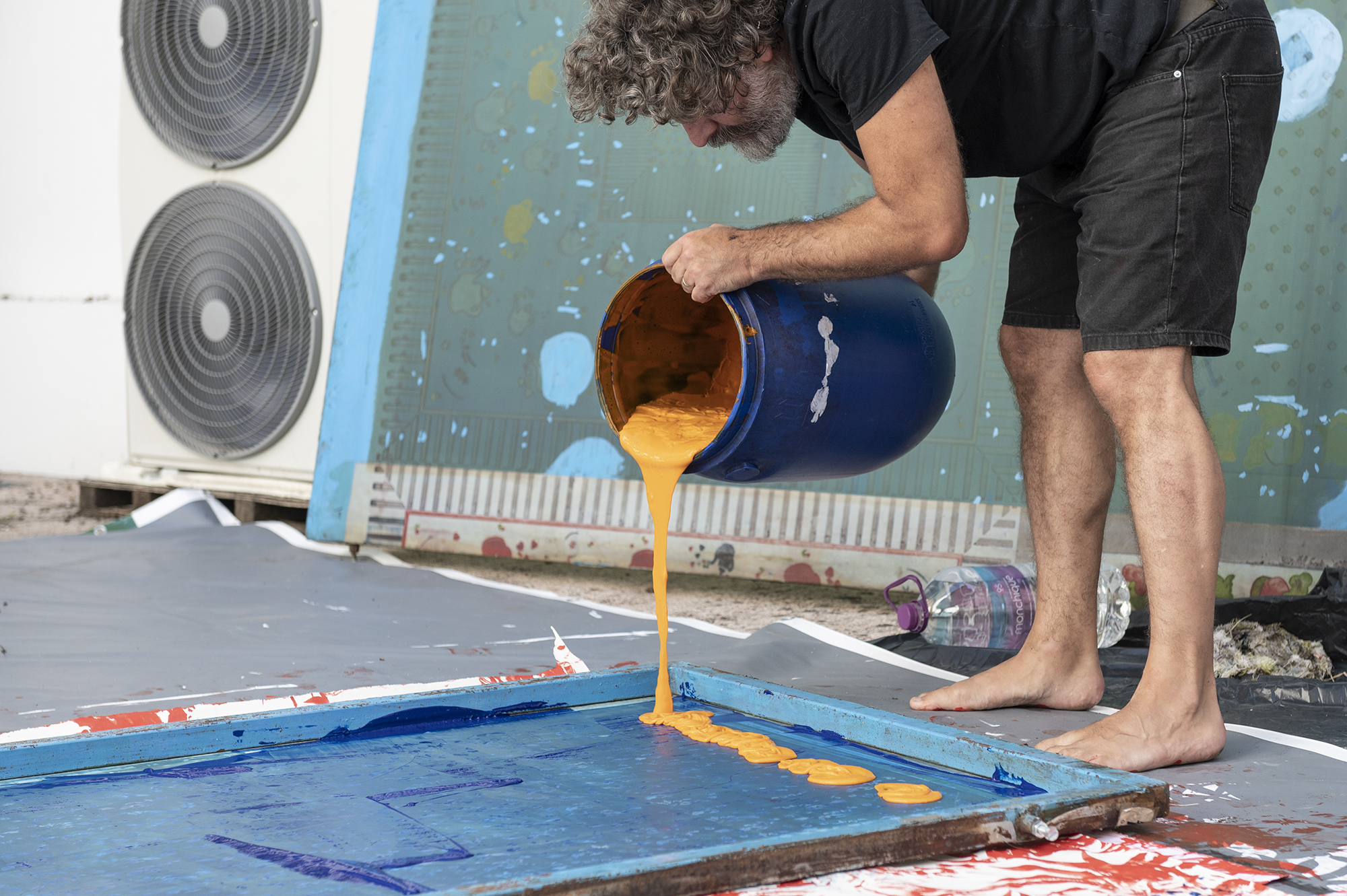 A visual artist, filmmaker, poet and screenwriter Pedro Bastos, who was born in Guimarães, participated as a local artist in the MagiC Carpets residency, which was part of the program of the 6th edition of Contextile 2022– Biennial of Contemporary Textile Art in Portugal.

It was proposed for him to base his project on the concept of the biennial itself, namely Re-Make, Dialogues for a Textile Culture, considering our confrontation with the world, and imagining the willingness to re-make, based on the critical thinking. The idea was to operate working on the topics of origin, cause, creation, construction, thought, connection and last but not least, transformation.

This reflection was proposed from the contexts of textile culture in Guimarães, their inter and intra-texts, and their possibilities of textile as its story and its importance in the history of humanity itself and in the construction of life, the conditions of labour, its industry and the impact on the territories and their communities.

The questions were: what changes can we propose? How can we re-make them?

In this residency, where the process is fundamental, the space – an old convent built in the 17th century and later transformed into the city’s hospital, also influenced the concept of the artist’s project, both because of its character, size and possibilities, as well as of its history and memories creased by time and use. It is a memory trigger.

Pedro was born in this hospital and here seems to reside the artist’s first relationship with space. A memory in review, an activation.

The strength of the space is joined by the strength of the community that was involved this year in the development of artistic projects – the users of the Santa Casa da Misericórdia de Guimarães elderly homes. They are characterized as a group of elderly people, retired, with some mobility and cognitive difficulties. Here, life almost always consisted of hard work and was somehow related to textiles, which is to say, related to the territory of Guimarães – a textile culture par excellence.

For the project, Pedro Bastos, brought his character as a screenwriter, director and poet, and, right at the beginning, made a reference to chapter VIII “Memories of Luísa” from the book “Os Pobres” by a Portuguese writer Raul Brandão (1906).

The similarities of the stories he records with the stories in the book are clear, so are the narrative and the space where the action takes place – the convent, the infirmary, the asylum, the work and its harsh conditions, the poverty, the dream of the humble – where the memory that tells the story already seems like a fog swallowed by time “I’ll see if I remember correctly… First it’s all confusing!” (in Os Pobres, Raul Brandão, page 85).

Together with the community, the artist embarks on the search of other memories that populate the Vale do Ave region. “What can be found today, will serve for a dialogue with the present and the past. What has changed though?” (Pedro Bastos)

The artist places himself in the position of a collector of stories, a gleaner of memories and lives. The memory of the participants is activated, transmitted, shared and recorded in audio and video, to later be transcribed and anonymously belong to their painting work.

There is room for emotion here when perceiving the generosity of sharing and this condition is notorious for the final result of his artistic work.

And, once again, the memory. This time, the recurrent journey by train that the artist takes between Guimarães and Porto, the memory of having established himself several times in a landscape factory – composed of hundreds of old silkscreen paintings, now in disuse, which are aligned across the rectangle of the locomotive window glass.

Have this silkscreen paintings served their purpose already? They have already been matrices for towels and sheets, they have imprinted their own memory on fabrics in the times gone by.

Its reactivation becomes imperative. They must tell their own story again.

One of the large serigraphic silkscreen is exposed, alone, in a room, becoming an artistic object. It operates on a play of light, which draws the open spaces of the canvas on the ground. The memory fog is set up again, now expanded.

Instead of the soft support of the warp and weft, Bastos uses the zinc plate to reprint the design of the canvases, making them perennial, indelible, incapable of usury and wear. It transports them to the condition of painting, exposed from above, however, at the scale of the body, close to the viewer.

He adds a word. He transcribes short sentences, letter by letter, excerpts from the lives that people from the homes (“the Luísas” in a figurative sense) told them during the sessions. The lost stories and the great adventures of the community, the ones that shaped their lives, are now in a living archive, a future memory.

Technical labels of the artworks

He worked as a screenwriter on films by directors Rodrigo Areias, Jorge Quintela, David Doutel & Vasco Sá and Tânia Dinis.

His works have been regularly exhibited since 2012, in individual and group exhibitions, having been selected for the Biennale D’Art Contemporain-Jeune Création Européenne 2015/17.

In 2020, he published his first poetry book Piche.

He is currently finishing his next film, shot in Vale do Ave, which is part of his latest video installation Less than 50km from Home, presented in 2022 at Caaa – Center for art and architecture, Guimarães.