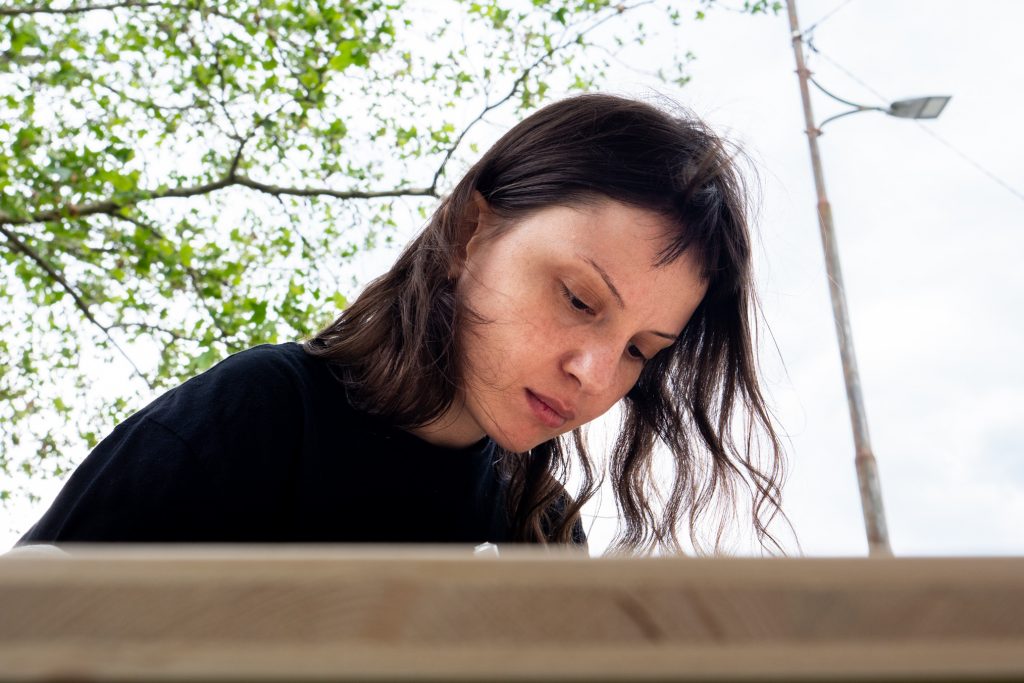 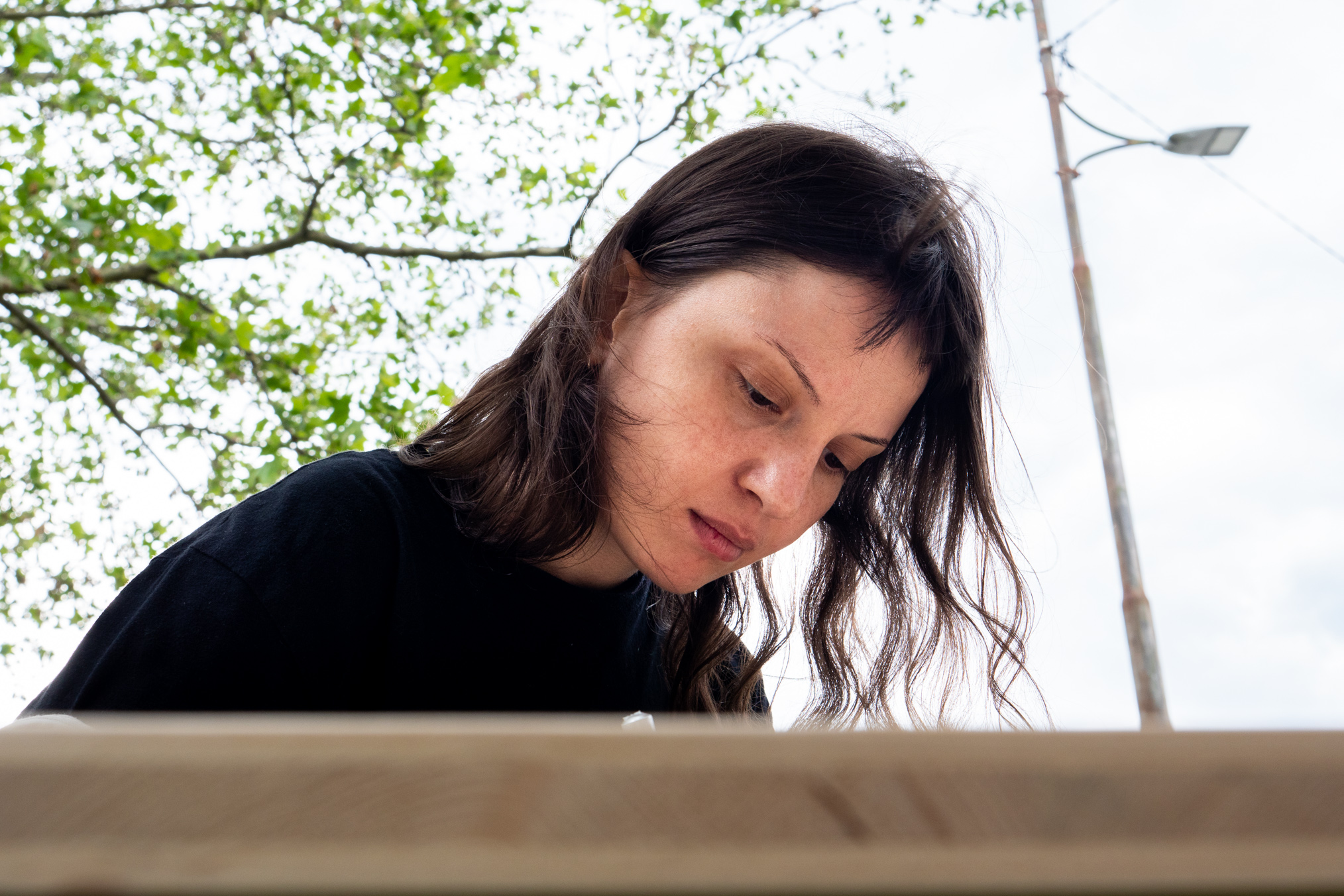 Sonic Worlds of the Between – between the moments in hush and thundering noise of everyday life. Between now and then, closeness and distance, between hearing and listening. Always open and full of life vibrations. – in an never-silent soundscape!  Danijela Oberhofer Tonkovic (curator)

Because of its beauty and fragility in the sense of time-baseness, ephemerality and no visible trace, but at the same time its ubiquity and power – it was decided to use sound as a primary medium of art expression for discovering potentials of the surroundings. Having detected (new or existing) potential of the public space that is in some way “in-between”, the artist of this residency was challenged to set it up in the way of telling a story about the city or even alternative realities. Mitka Motskobili answered the challenge stunningly.

With a recommendation by CCA-Tbilisi, Openspace (in collaboration with Heart of Noise Festival) invited her to participate to the residency program for which she created Liminal Protocols and prepared a live performance in tram – called TRAMatic Ride. In her project, she focused on various modalities and references of representation, resistance and political activism regarding singular and collective efforts. A tram ride live performance at the Heart of Noise Festival was planned to be a performative reflection of her experience in Innsbruck.

According to the curators, the public space that didn’t have a satisfactory function over the last few years – Frauenanger Spielplatz/ Park area in the district Wilten – was chosen as the location for the project. The construction of a Refugee Shelter in the quarter of Wilten in Innsbruck (2015) coincided with the dismantlement of playground accessories at the Frauenanger Spielplatz, located right next to the Migration home (built in 2015). For years, neighbourhood residents were left with a single bench in a park, which was also eventually removed in 2019 (just a month before the start of residency). The authorities justified this step over the past years by their new policy of designing various parks and spaces in the general alcohol-free zones, due to the raising of drug-related issues in the city, construction of a new traffic structure, safety issues, to the point that it is not really necessary for every green space in the city to be a park (at the same time the space was filled with large billboards).

This complex situation in several different directions and from several different angles of view strongly attracted Mika in a very special way and made her work on the art project Liminal Protocols, which is a site-specific interactive sound installation that taps into the multi-layered circumstances pertinent to the gradual demise of Frauenanger Spielplatz. The park territory is rendered as a sensory area, where field recordings of various other parks of Innsbruck are transported and the volume and complexity of the sound layers increase incrementally as more people enter the park. The installation attempts to represent possible alternative realities for the area through sound and collective effort via attendance.

This means that the sounds stop if there is no audience (not initiated by the passage of an animal or some foreign object) and begins to play if people enter the place. The intensity and increase of the sound depends on the number of people present in the area.

Throughout the whole residency, Mika was collecting information about this park area (from members of Openspace team, neighbourhood residents and municipality staff members). With a Zoom audio recorder (by Klangspuren Festival), over a few weeks, she collected sounds from many parks in the city area for her project. Having collected the sound fragments, she turned them into a multi-layered sound composition that was integrated into the installation.

The installation incorporated human detection by using IT technologies like raspberry pi device and its interfacing options. This means that it is off, if there is no audience around (it cannot be initiated by an animal or some object). The more the audience, the stronger the installation sounded. It was a very complex technical work inside the virtual environment – with many components, programs, codes, cameras and interfaces. At this segment, Mika got supported by ludwig technique (a.k.a. Johannes Payr), local cross-media concept and performance artist from Innsbruck who was at the same time very skilled within software development (member of Hackerspace Innsbruck – IT Syndikat). Johannes got involved in the project early on and his diligence, expertise and generosity made for a smooth execution of the project.

Piezo microphones that she made on her own within the Jiří Suchánek’s workshop Sonic Map of the City – became an integral tool in the preparations for the Heart of Noise festival live performance TRAMatic Ride – which was based (more than 90%) on field recordings collected during her residency time in Innsbruck.

Performing live in a moving tram from the city centre of Innsbruck to the small alpine village in the countryside called Kreit was a very peculiar and ravishing experience – as for the festival audience but for Mika herself as well! A project that speaks for the power of creation, movement, growth and trust.

As a long-standing practice of MagiC Carpets Innsbruck, Openspace strives to enable artists to meet and exchange knowledge with experts in their area of interest. Because of this, Mika had the pleasure of meeting and spending a day with Elisabeth Schimana – a musician and composer, female pioneer of electronic music in Austria, who examines questions of sound, space and the body.