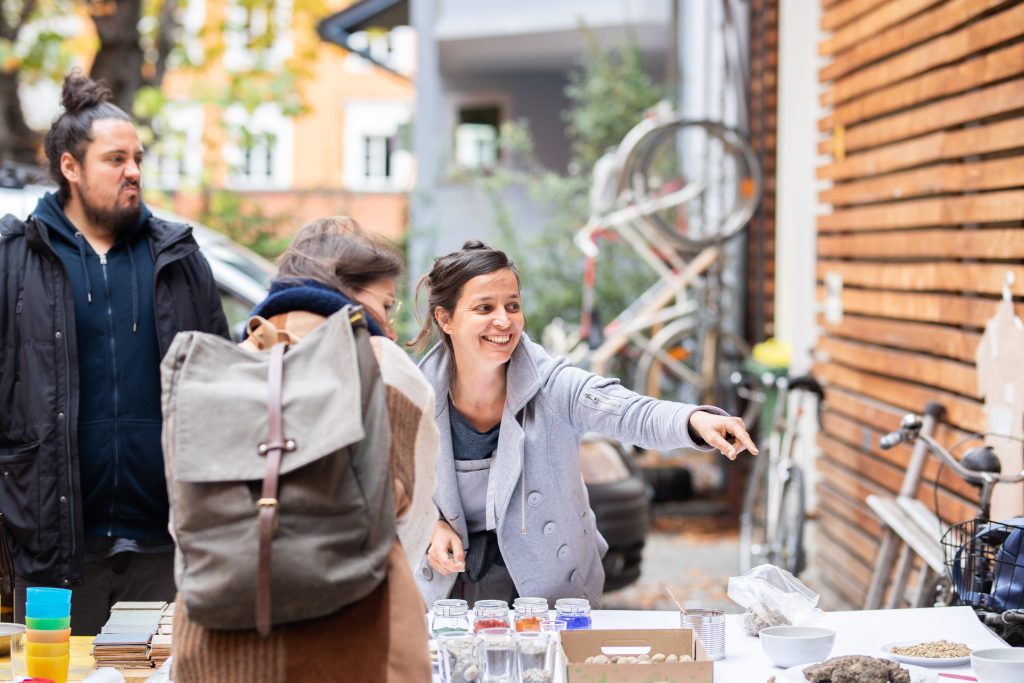 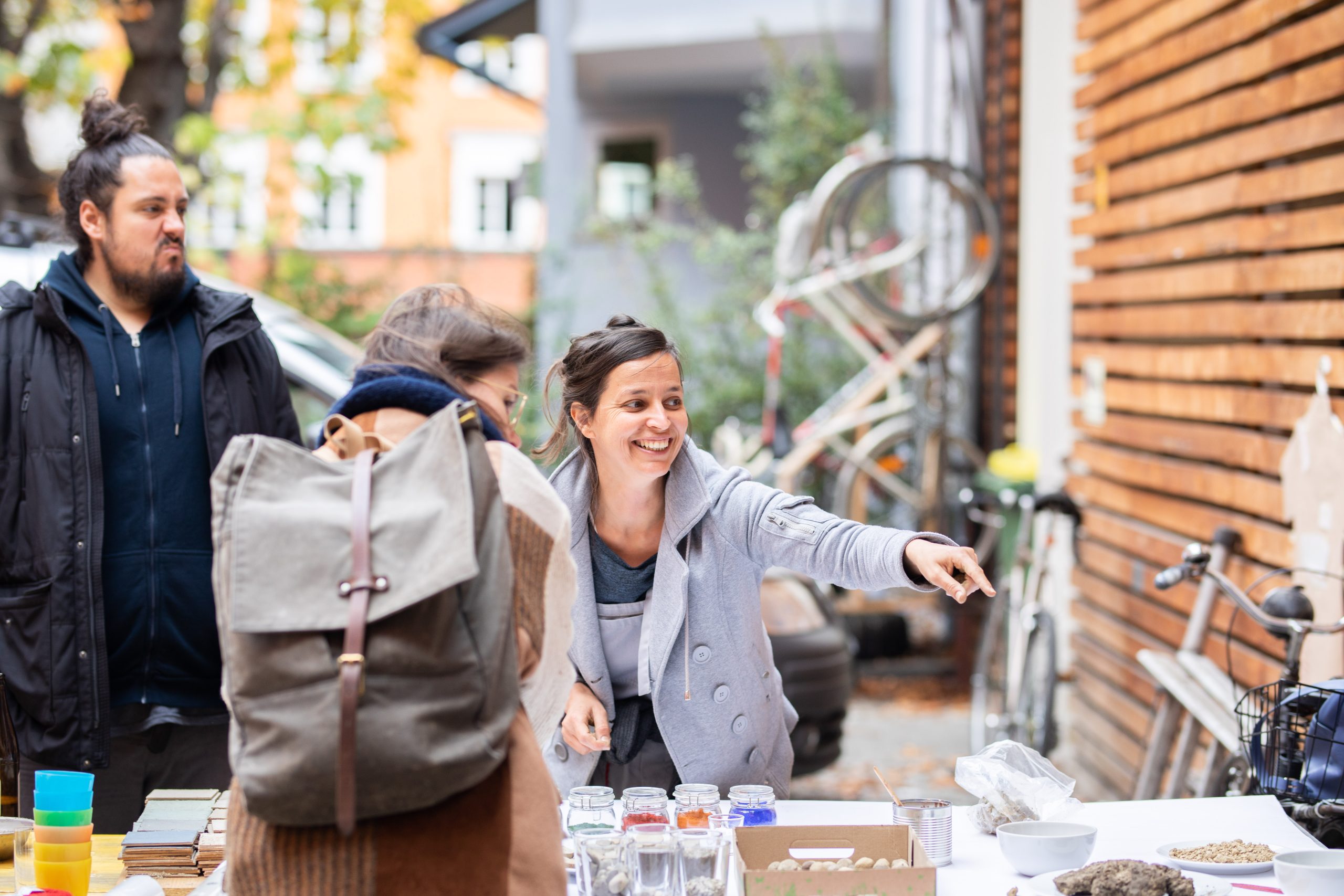 A manual on how to be a better person!

Dragana Kojičić is an independent architect specializing in earth architecture and a doctoral student of Scene Architecture, Technique, and Design in Novi Sad. Even though earth construction is a long-forgotten method, environmental issues have brought it back into focus o the construction industry. Multitalented, multiskilled, with many areas of interest and expertise – she feels and multiplies the magic through her knowledge-filled earth, mud, and soil.

The starting point of Dragana’s work is freedom, understanding and respect. Followed by the search for the availability of resources at the local level, energy, life cycle, relationship with the environment, and earth. Earth as nature, material, culture, territory, property, land, energy, and earth as a link attracted Dragana’s interest in Innsbruck.

In its first phase in Novi Sad, the project started as an interactive digital campaign on social media. As such, #newcheapnature aimed to provoke people to question their everyday actions as consumers and their environmental consequences. Dragana translated the project from its former presence in digital space to the urban environment of an neighborhood in a totally analog way.

The residency started off from getting to know the new environment, the community, social values, and ways of dealing with the environmental practices in everyday life. After visiting numerous organizations, institutions, manufacturers, and individuals related to the neighborhood, we realized that they are already on an enviable ecological and sustainable level, applying the correct principles of action to meet the community’s needs and the necessity of environmental protection. Therefore, her wish to completely focus the attention to the neighbors who live in the block, i.e. the housing complex and the residents who use the passage daily, became more substantial and precise. She decided to use the earth as the residence’s theme, a tool for working with the community, and a medium for sharing and receiving knowledge. The very culturally diverse neighborhood structure kept Dragana’s curiosity.

In parallel, she explored the environment, nature, culture, history, and everything that has to do with soil, earth, ground. She examined the soil everywhere, dug it up, analyzed it, and collected it. Her moves started and ended on the ground – in the parking lot, in the garden, at the construction site, park areas, on the mountain, at the river side and even in the recycling center for construction materials.

The next step was installing a working station/ desk for observation and communication, which she established in the passageway in front of the openspace, where she spent hours in observation. Following the “rhythm” of the passage, she looked the participants in the eyes and often non-verbally established communication and trust. Over time, the curiosity of passers-by followed; they approached Dragana more and more often. That desk was richer every day, accumulated more knowledge, gathered more curious passers-by, and created a clearer vision. To everyone’s surprise, in about a 2-hour slot (in the early afternoon), up to 200 people pass by every day.

Dragana generated dozens of concepts for working with the community in that process, but she decided to follow a path that directly supports the t-Shirt project previously started in Novi Sad on one side, and the earth-laboratory on another.

The biggest issue of Innsbruck inhabitants is the issue of territory as a living space, which was extremely well covered in an exhibition at AUT – Tirol Architecture Museum, located just a few meters away. She received permission to use their materials for the residency work, considering they dealt with the same thematic field.

From one table, two projects were created. One – that followed the thread of the previous New Cheap Nature work and legacy – which she named “storyTAILORING”. And the second has grown into an extensive earth laboratory – “restauraTERRA”.

On November 3, as a part of the contemporary art festival “Premierentage”, the results of New Cheap Nature artists-in-residency were presented almost like a staging of a theatrical piece, including: storyTAILORING – an exhibition of collected samples of clothing and stories from the members of the communities, and the restauraTERRA with soil workshop and performative dinner, where the values are shared, knowledge is exchanged, and friendships made. In her tailoring shop, people could bring their oldest t-shirts, she would take their “cuts”,  copy them on recycled paper and write a story about it. While in her “restauraTERRA”, she “traded” on a relevant topic. For the final exhibition, she made a whole scenography: the cuts of the t-shirt were hanging on a string that dragged around the tailor’s shop. This way, passers-by could read the stories and get inspired to join by telling their own – on the other side, the rope was blocking their way, which made the audience think about the territory and property question, as well as the public space, its use, and its occupancy. By setting up a “big dinner” table, she actually “cooked up“ a menu of narratives that explore the various meanings of earth and connected questions of value and usership. Dragana even showed us experiments and techniques on how a delicate shiny sphere resembling a can be made out of mud in 15 minutes.

Local artist and illustrator Melanie Gandyra was invited to summarize and visualize, to grasp the whole concept and give more than a visual identity to this story about the similarities we have as humans to nature, the soil, plants, elements. Melanie and Dragana’s co-creation work really inspired me, as well as Melanie’s co-creational process with co-curator Sara Agic. As the inner compass of her work, Gandyra has made it her mission to use art to draw attention to the climate change and its consequences. Her drawings usually start on paper. The colored pencil forms the basis of colors, shapes and structures. These analog fragments are digitized, composed and finally find their final fusion. Expressive color worlds abduct into symmetrical, often surreal superstructures that metaphorically communicate and inform.

In addition, Dragana also participated in the MagiC Carpets Partners Meeting during her final residency days. By asking meeting participants to bring a pinch of soil from their countries and homes, she introduced the earth-laboratory restauraTERRA and curatorial MC co-creation workshop. This workshop helped us all come down to earth and was truly magical.  As a testimony of that day, an artwork from Dragana’s workshop, which was co-created by all the curators, is still hanging on the façade of openspace guarding our passage.

Another beautiful testimony, which still stands proudly in the passage, is another co-creational artwork by Dragana and Richard Schwarz – the earth pedestal. In this case, the whole needed material was taken from the nearby construction site; under the motto “everything we need is right on our doorstep”. We take it from nature, we use it with respect, and as it is exposed to the weather – it will gradually return to nature or “back to ground”.

That is exactly the essence of the cycle of life: conscious living and sustainable consumption of resources.