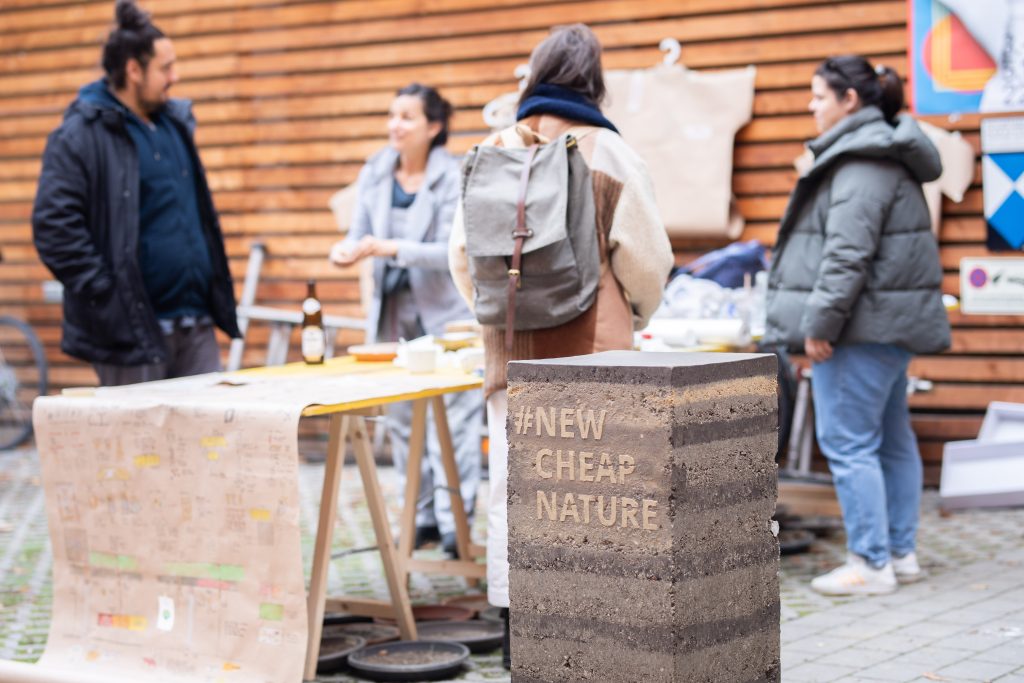 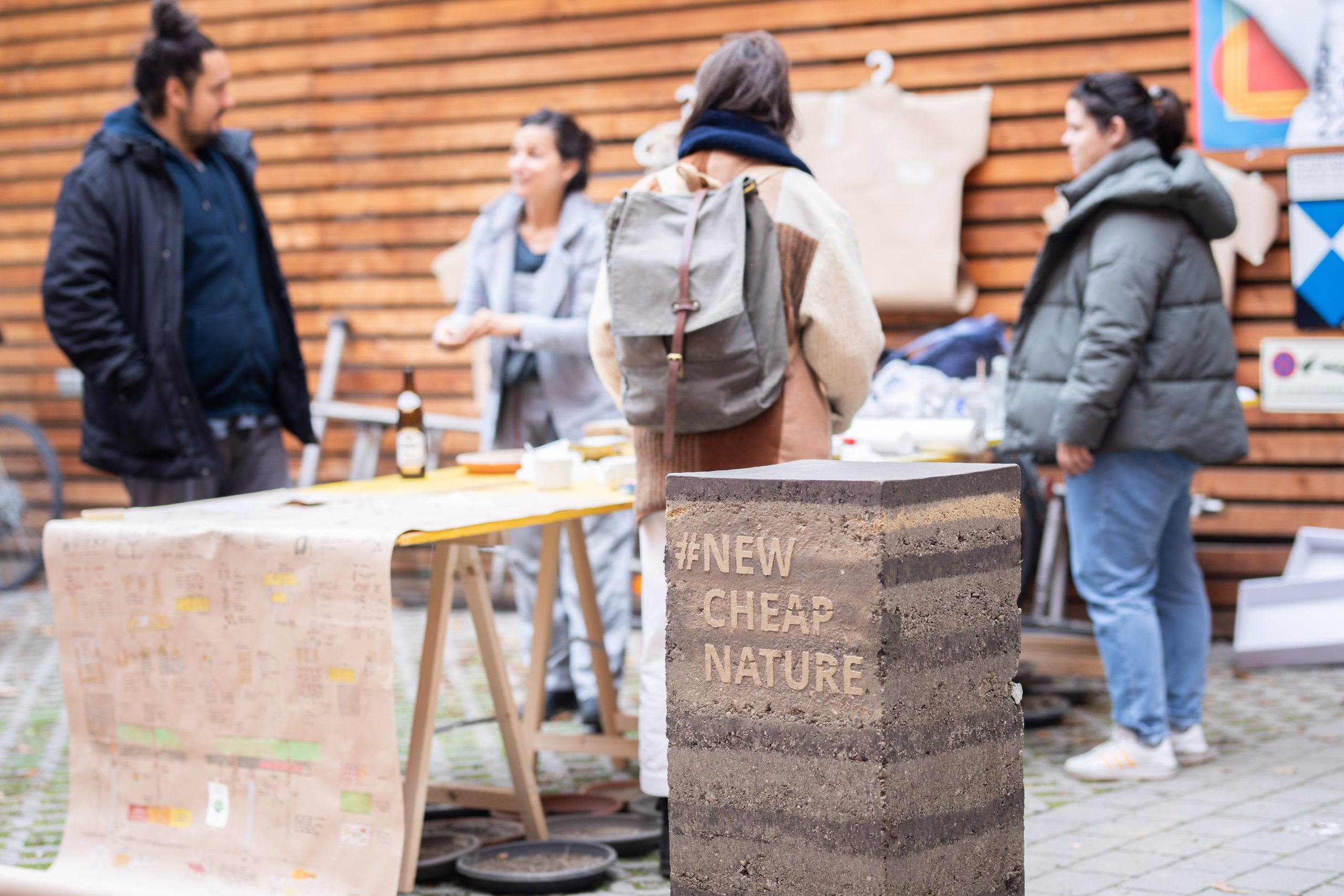 A call for more sustainable living in everyday life!

The issue of overconsumption has been increasingly urgent for decades! Advertising encourages this. We experience the consequences of consumption and, simultaneously, are ‘distracted’ by more requests to consume – MORE! Much of what we know about our world comes from the Advertising. These activities cost money, and money comes with products and services, which means resources and energy is consumed – it is a self-propelling negative spiral. But Richard wanted to look at it from the other side: “Who would invest time and money into selling “NOTHING” and messages that nothing else is necessary? That sounds like one task for ART.

The #newcheapnature project was created during Richards Artist residency within organization Novo Kulturno Naselje from Novi Sad. Education and a non-critical approach to this topic were the priority of the first phase of this project. Ricard strongly wanted this project to be fully and thoughtfully implemented in Tyrol, and we decided to follow him along the way. Finally, it helped us become better citizens of the Earth.

Richard Schwarz was born in 1984, and studied European Ethnology (University of Innsbruck) and Art and Science (University of Applied Arts, Vienna). He is active as a media artist and cultural scientist. Starting with observations on how people live, finding topics in a wide range of places in the world, nature, and society, viewing them from different perspectives, and, finally, developing artworks to draw focus on essential topics.

Ricard sees the world through different eyes and has a unique relationship with time and nature. Richard lives now and here and defies modern challenges related to time. Richard is an excellent balance to our fast, clumsy, hectic, and often stressful life.

The preparations started in summer and included frequent online meetings with Richard and Novo Kulturno Naselje. Richard arranged cooperation with FH Kufstein –University for applied studies and gathered a group of final-year “Sports, Culture & Event Management” students to be working on the project from October until December. A carefully thought-out plan for the development and implementation of the project was adopted by all participants and represented a reliable basis for future activities.

A vital link was missing – which would have brought everything together in an even greater sense – the selection of a Serbian artist for our Residency. Her name was Dragana Kojicic – an expert in earth architecture and a doctoral student at Scene Architecture, Technique, and Design in Novi Sad. Even though we had a relatively short period to decide, our colleagues Sara, Tanja, and Marko from Novi Sad, dared to choose the perfect person who would meet all the requirements for the project implementation in Austria, thus supporting Richard and making an intro to the activities planned for December.

During October, in the courtyard of openspace, the passage that connects several multi-tenant buildings and two streets of the Wilten district – Dragana experimented with the way to address the community and drew it into the world of nature conservation, sustainable living in a playful, educational and magical way – the magical world of Earth. For this purpose, she has chosen a local community that lives, works, and passes in front of openspace venue daily and consists of the neighborhood’s residents, parents, children, and elders from different social, economic, and ethnic groups as our venue users themselves. The essence of the Residency was to “return” the project to the real world – to make everything offline as much as possible, without traditional media and online social networks, but to be alive, present, and work with the community through daily and direct contact. Even if it was a matter of looking in the eyes, a simple but truthful eye contact and a smile.

It was also very special and lovely to watch how these two artists Dragana and Richard worked together. They accepted, exchanged, respected, and learned from each other – leading to Dragana becoming a t-shirt sewer and Richard becoming an architect of earth architecture.

Through two strong positions – two stations – story TAILORING and restauraTERRA, she spent several hours every day observing and working in the yard, communicating with the environment and the community. Creating the content, dramaturgy, and scenography for the final event. In the last week of her Residency, Dragana represented her shop “storyTAILORING” where people brought their oldest t-shirts (and other pieces of clothing) – she (or they together with her) copy it on recycled paper and wrote a story about it. While in her “restauraTERRA”, she “traded” on a topic so relevant for Innsbruck (and yet so universal) – the value of the EARTH. For the final exhibition, the cut of the T-shirt was hung on a string that dragged around the tailor’s shop. This way, passers-by could read the stories and get inspired to join by telling their own. Within the contemporary art festival “Premierentage”, the results of NEW CHEAP NATURE residency were presented – like a staging of a theatrical piece: including storyTAILORING, an exhibition of collected pieces of clothing and stories from the members of the community, restauraTERRA with soil workshop and performative dinner, where the values are shared, knowledge is exchanged, and friendships are made.

Local artist and illustrator Melanie Gandyra was invited to summarize and visualize, to grasp the whole concept and give more than a visual identity to this story about the similarities we have as humans to nature, the soil, plants, elements… Great co-creation works of Melanie with Dragana and Sara Agaic.

This occasion was also memorable, as it represented the fifth anniversary of MagiC Carpets –  co-funded by EU, followed by a “Partners Meeting” hosted by openspace.innsbruck between the 3rd and the 7th of November. It was a very humble and glorious moment for my team and myself.

Unlike Dragana’s very analog way of working, the students prepared an online campaign in parallel with her residency. Based on the previous campaigns in Novi Sad and Kaunas, the Students of FH Kufstein, accompanied by Richard, me, and Sara Agic, developed the content and schedule for the postings on Instagram to follow the plan and deliver online.

Three weeks of a less-is-more Instagram take-over with the project #NewCheapNature was a success. We gathered valuable information, stories, new followers, and raised engagement – all with the highest purpose! Our Instagram account was in the setting to promote mindful use of the Earth’s resources. The campaign began symbolically on December 8, “Black Friday” – Mary’s Conception, a holiday on which stores are allowed to be open. The campaign used this date to invite the public not to buy anything new but to look into their own closet instead. It started with a seasonally appropriate theme: Christmas. The project focused on many aspects of a more sustainable living in the everyday life: suggestions were provided for more sustainable Christmas gifts and their packaging. Seven substitutes have been presented that help make everyday cooking more sustainable. This was followed by information on the topic of technology, such as this sobering figure: 160,000 laptops are thrown away every day in the European Union, while 70 percent of them could be reused. The theme that led to the campaign’s finale was fashion. Aspects of manufacturing, distribution and recycling were highlighted with valuable suggestions on rediscovering and reusing old clothes and information on the fashion industry’s environmental impact. The campaign ended by inviting the public to investigate their closet instead of buying a new wardrobe. This nice storytelling evolved with more than 25 funny, exciting, cool, and heartwarming stories collected and shown – showing the value of reusing “old”.

The campaign was carried out as a cooperation between students of the master’s program “Sports, Culture & Event Management” of the FH Kufstein Tirol – Theresa, Olga, Nico and Kristóf, the local artist Richard Schwarz (the author of the project) and the cultural associations openspace.innsbruck and Novo Kulturno Naselje. Working with students was a great pleasure for all of us. Meeting for a month, we shared knowledge and learned from each other.

On Jaunary 27, students will officially present the results of the project at the University. A video work will be created for this purpose, and we will share it with you.

Special thanks to Sara Agić our co-creator and co-curator of the project from Novo Kulturno Naselje – Novi Sad, Serbia. She was a curator of the MagiC Carpet residency of Richard Schwarz in Novi Sad, where he developed the New Cheap Nature project. We invited her to support us during the last two weeks of the residency here in Innsbruck. She was literally an extension of my thoughts, my hand and action. Her presence, expertise and unconditional help meant a lot to me, especially during the final preparations for the MC Partners Meeting, when my focus was also on the preparation of that extensive project. It was a mutual learning process! We wish this smart, multi-talented and skilled young person to continue to follow HER dreams.

A big Thank You to all project collaborators and all openspace Instagram community campaign participants!

Those who would now like to follow the campaign in retrospect are invited to stop by the Instagram page @openspace.innsbruck. Here you can find all the posts as well as the story highlight called #NewCheapNature.

Activities in the future: a collaboration with Patagonia Outdoor clothing store has been agreed upon, and maybe even a new EU Project with our partners from Serbia, including Richard Schwarz, is on the horizon.

It is good to be more aware of your daily relationship with yourself, your habits, people around you, the environment and resources. It’s important to come (down) to EARTH, to cherish and question the given magic. New Cheap Nature is a recipe for a healthier relationship with nature in yourself and around you, we would be happy to prescribe it to everyone. Especially before Christmas.

When: From November 24 to December 15

Final presentation of the students on 27 January, 2023 at their university