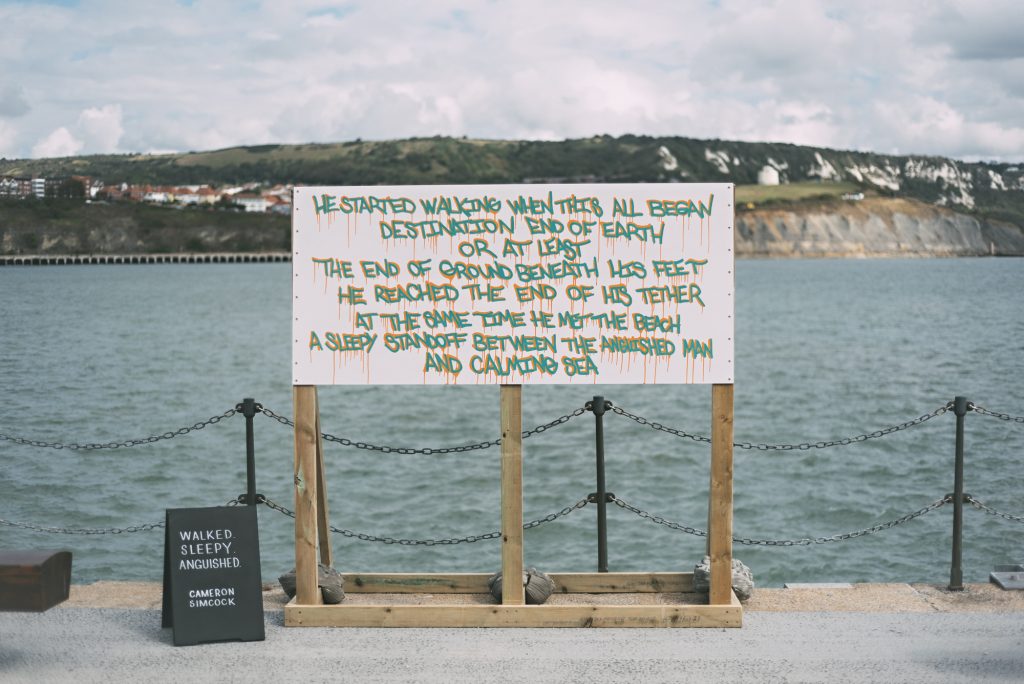 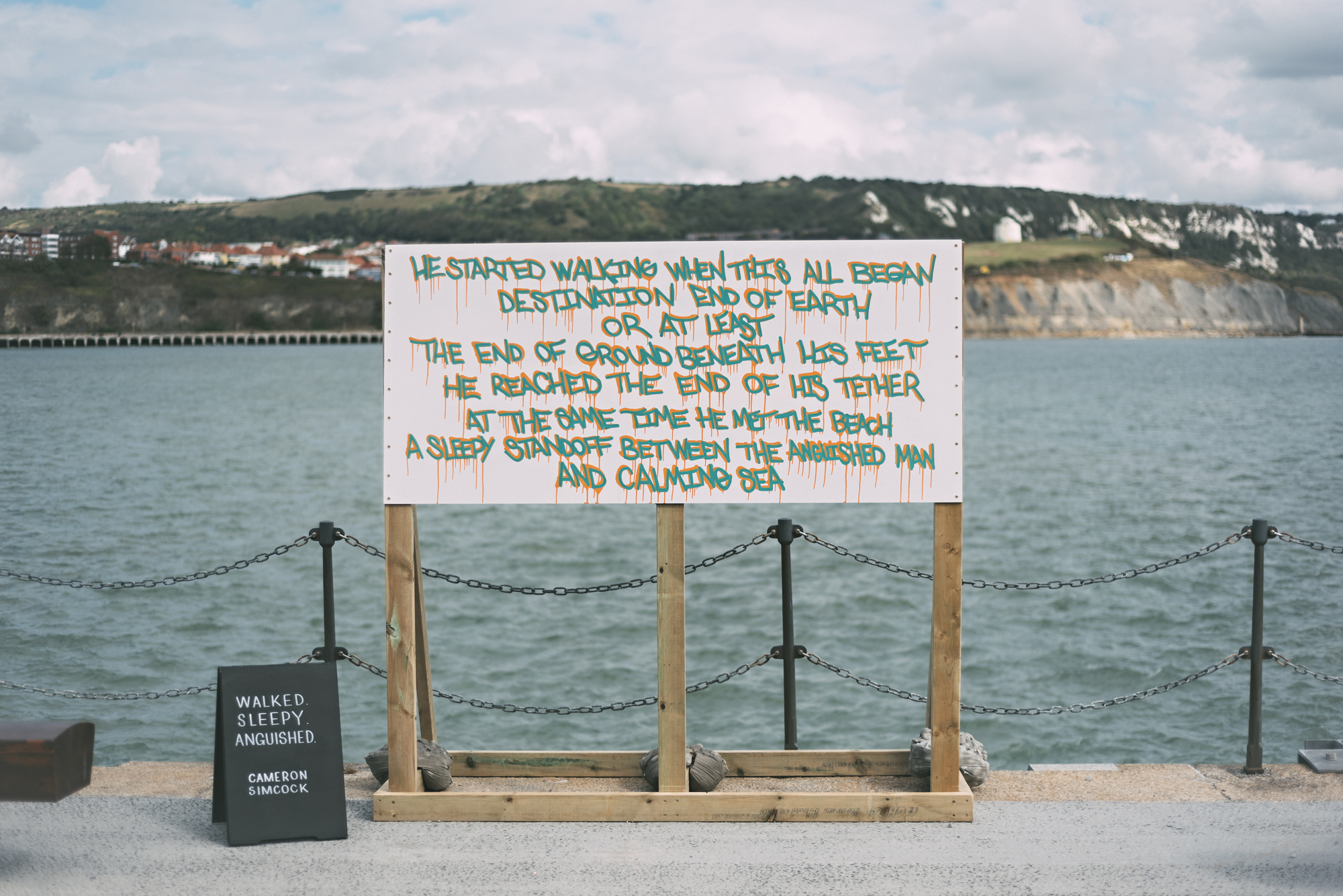 Through Folkestone Fringe team conversations during lockdown, emerged some ideas in response to the situation in which we found ourselves. We wanted to find ways of bringing people together, boosting morale, both in the community and within the team, all within the confines of lockdown. Group gatherings were not permitted, and the only reason you could venture outside was to do essential shopping, to help a vulnerable person or for your 30 minutes of daily exercise. People had to keep to their local environment as unnecessary travel was also not permitted.

We spent time researching ways that we could still produce projects that people could engage with in a meaningful way. It made us realise how much we usually focus on bringing people together physically in our projects and creating that sense of community and active engagement which is such a fundamental human need. We asked ourselves: what can we do that still fits with our aims and also connects people together within these restrictions?

The first idea came from Nico Dunsbee, Folkestone Fringe member, local arts producer and avid journalist. Nico is a strong believer in the power of words, both spoken and written, as a tool to express emotions and to connect with others. Nico came up with the project The Anti-Diary: Writing for our times which came in the form of an open online blog platform which anyone, anywhere, could contribute to. Nico invited two local writers, Kerry Ryan (Founder of Write like a Grrl) and Josie Carter (local poet and spoken work artist) to take-over the blog site for a week each and to put forward prompts for people to respond to.

The response was eclectic and moving with people writing their own hopes, fears and anxieties during these uncertain and difficult times. One contributor wrote: ‘I marvel at my brain’s ability to be non-compliant. I wish I could shake it into submission, but that doesn’t feel like a very kind thing to do. My brain is testing my patience. This is the most I have written in weeks, and it feels like one long complaint. I don’t particularly want to have produced this, but I have, so I suppose that’s something! That’s something, right?’

Another entry reads: ‘Today, I’m back where I was born. I’m lying down on a towel in the sand, pretending the pandemic, lockdown and the looming financial crisis are happening somewhere else, or sometime else.’

During the Festival of Looking, Nico performed some of the entries on the Performance Plinth, a project run by Creative Folkestone during lockdown to coincide with the return of Folkestone’s Banksy artwork of a woman with headphones looking at an empty plinth. With these entries being read out loud outside, the words being given a voice, made them in a way even more poignant. It made it clear how writing can enable us to express our deepest emotions in a way that we might not feel comfortable saying out loud. Nico also ran an online workshop ‘Walk Write’ on Zoom in which participants were led on a virtual walk of Folkestone through a video Nico had created. The walk would be paused throughout the workshop as Nico gave the participants tasks to explore through writing. The participants gave great feedback with some saying that they had never written in this way before, could feel the benefits and that they would continue to do it.

Arts Consultant and Curator, Sandra Drew, commented that the AntiDiary was a… ’A raw personal collection of day to day thoughts and feelings, upsets and joys, unpolished and from the heart, sent out to the unknown… Some short, single thoughts or an emotion expressed succinctly, some much longer, as if the space to speak their truth was so exhilarating, they couldn’t stop the flow. So many different voices, such a wealth of experiences. All felt authentic, a tiny glimpse into other lives. These narratives combine to form a story of our time, our community, answering, very precisely, the question ‘What’s happening, exactly?’

Another project idea came from Folkestone Fringe team member Mitchell Bloomfield who was inspired by the geo-locating app what3words. The app divides the whole world into 3m squares and appoints 3 random words to each square. This gives people a very specific idea of where you are, wherever you may be in the world and is used by emergency services and trekkers world-wide.

Mitchell came up with the idea of inviting people to pick a square of significance to them; whether it is a 3m square in their garden, the pavement outside where they live, the bus stop they wait at to get to school or the spot where they can see their favourite view; and to creatively respond to it in any way they want. This could be a photograph, a poem, a drawing, a dance; we wanted to encourage people to think outside the box of what Art is or can be. These artworks would then be uploaded onto a map of the world which pinpoints where and how people are responding to their chosen 3m squares all over the world.

There is also a political undercurrent to the project – as the project approaches public space in a very democratic way. It is there for you; for the public to enjoy and to respond to. We wanted to encourage a sense of open ownership through giving the project the title MySquare.

On the August Bank Holiday, Mitchell worked with Hannah Prizeman, fellow Folkestone Fringe team member and outreach enthusiast, to produce a day of workshops at Folkestone Harbour Arm. For this, they invited two local artists; Ruby Bolton and Claire Attia to lead workshops which passers-by could get involved in. The workshops were extremely popular and lots of people, young and old, got involved. Their responses, laid out on the table to dry for others to see, to ‘change.folds.confining’, ‘robots.shameless.motivates’, ‘sun.jupiter.moon’ were varied and beautiful.

They also invited two local artists, multi-disciplinary artist Cameron Simcock and filmmaker Joel Snowman to create their own responses to their square of choice which were installed for the day.

As part of the Festival of Looking, Mitchell and Hannah created a MySquare trail around Folkestone. They selected 7 squares in a variety of locations; some were more urban and in the centre of town and some were on the periphery of the town. To accompany the trail, they also produced a MySquare Journal and activity pack which people could collect from the Festival hub at Urban Room Folkestone. The idea was to create a trail which would encourage you to explore the town in a new way and to look at your familiar, everyday environment with a fresh perspective. Endless inspiration can be found around you if you have an ‘outsider’s’ perspective and a curious mind. Some of the prompts in the journal invited participants to: ‘Write a message of hope for refugees’, ‘draw your favourite person or object’ and ‘draw three people from the past, present and future’

Sandra Drew said that MySquare was… ‘A wonderful fluid and expansive project which seems to have contributions from children, families, young and old, truly inclusive, creating a patchwork of ideas.’

These online projects were created in response to the COVID-19 lockdown and both aimed to create a closer connection between people and place during these strange times. Both of these projects are ongoing and will continue to grow and expand into the future.