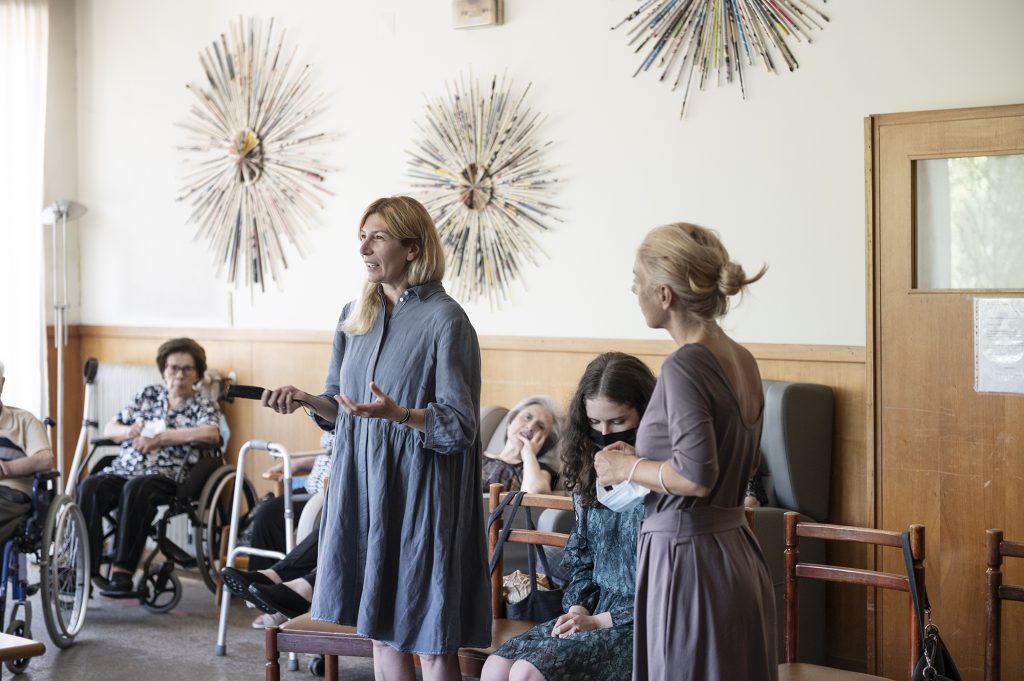 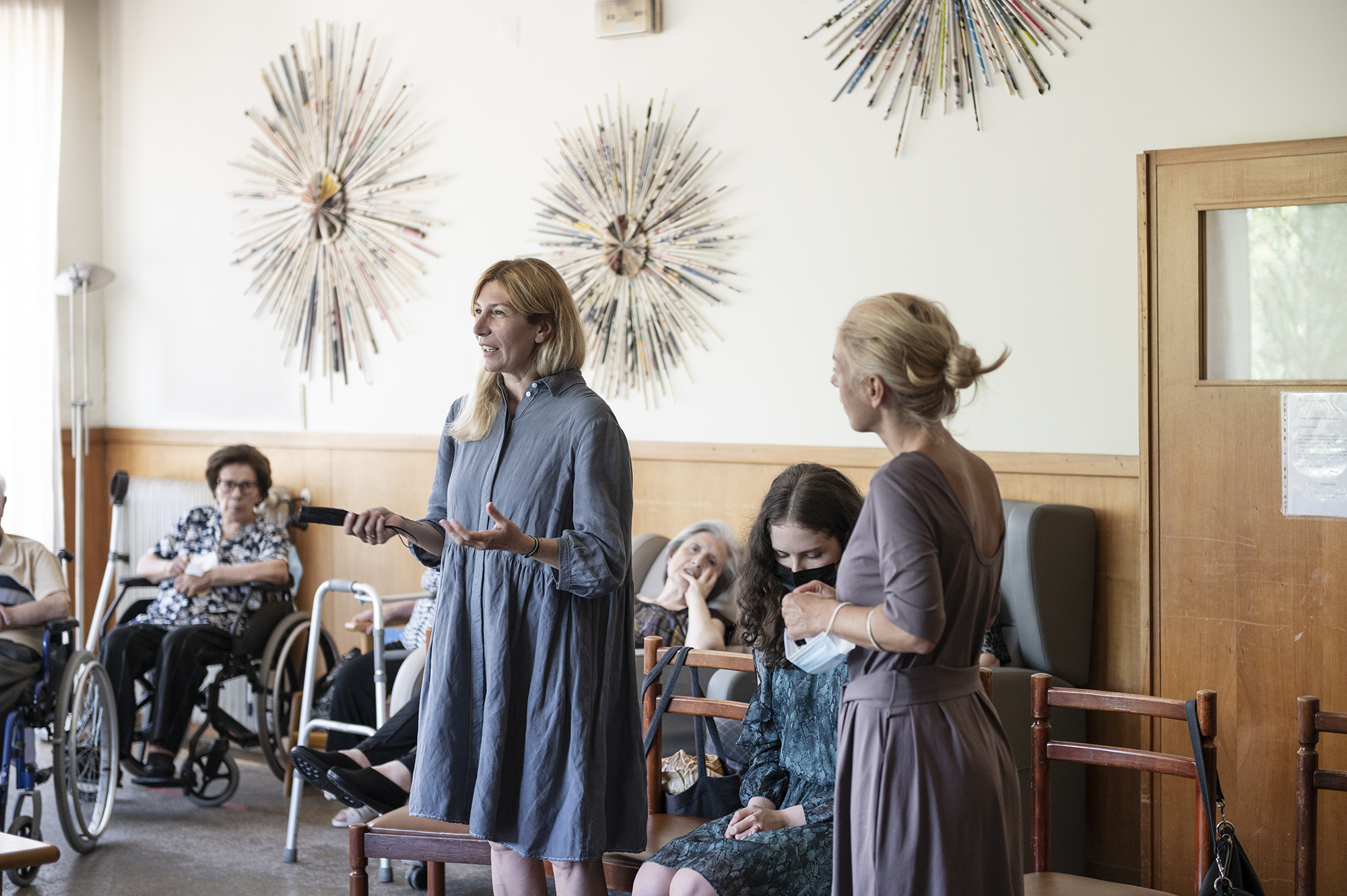 Adelina Ivan, (b.1971 in Bucharest, Romania) is a visual artist with a conceptual approach to textile art, recorded performance, video and installation and with a growing interest in drawing.

The basis of her artistic practice is a social and cultural critique of the conventions that have distorted an otherwise infinite realm of possibilities of enacting femininity.

She participated as an international artist in the MagiC Carpets residency, which was part of the program of the 6th edition of Contextile 2022– Biennial of Contemporary Textile Art in Portugal.

Moreover, during this third residency, it  was proposed for her to base her project on the concept of the biennial itself, namely Re-Make, Dialogues for a Textile Culture, considering our confrontation with the world, and imagining the willingness to re-make, based on the critical thinking. To re-make results from the “space in between” the action and the reaction.

Operating in the cause, in the construction, in  the connection and in the transformation, we will have the conditions and the possible space for us to think the world, and wish to access some (few) answers, through the countless intra-textual, intertextual, contextual and interdependent relations – of the ecosystems and their transformations – body, history, politics, society, economy, territory, space… Textile and textile art are, therefore, affirmed as inciters and convenors, also capable of provoking change and response.

The residency took place in Convento dos Capuchos in Guimarães, Portugal, an old convent built in the 17th century, which was later transformed into the city’s hospital, which is now a vacant space, occupied by all artistic residencies (with studios and exhibition space) of the Contextile’s biennial.

The residency process began with a reconnaissance of the textile territory, through a series of visits to the city, to entities and institutions related to Adelina Ivan’s artistic approach, such as textile factories and the Landscape Laboratory in Guimarães.

This residence considers the involvement of two communities. On the one hand, the community made up of nine artists from various parts of the world for the Contextile 2022 residencies, who inhabited the same exhibition and workspace – Convento dos Capuchos, sharing ideas and work processes, discussing concepts, experiences, or more pragmatic research. On the other hand, the involvement and collaboration with the users of the elderly homes from Santa Casa da Misericórdia de Guimarães.

They are characterized as a group of elderly people, retired, with some mobility and /or cognitive difficulties. Here, life almost always consisted of hard work and was somehow related to textiles, which is to say, related to the territory of Guimarães and textile culture par excellence.

Adelina Ivan’s artistic approach almost always starts from fictional stories, personal memories and historical, social and political facts that shape the condition of the feminine and the direct relationships between the paradoxes that inhabit it, such as exposure/protection, strength/fragility, permanence/movement.

Order, disorder, and movement guide her compositions through the creation of non-hierarchical structures and a system of relationships between objects, bodies and space.

The idea that the artist worked with the communities of the nursery home of Santa Casa da Misericórdia in Guimarães focused on the transformation of the hierarchical structures, supported by the transformative capacity of textiles (material and immaterial), its (in)subordination and possibility of making and remaking, but also and essentially on our relationship with spaces physical and mental, which we deal with in the everyday life.

The environment and surroundings and their forms of relationship, with the individual-society-space (physical and mental) create their own ecosystem that involves everything and that guides or conditions our actions.

And it is in geometry and geometric composition that the artist finds the cry for order and resistance of the feminine, as she mentions that geometry was originally considered a masculine activity.

It is in the bars of the windows in the workspace and in the buildings of the homes that Adelina finds references and metaphors for the plane (liminal space) that separates the exterior and interior space, the space of the house and the studio, the space of the street and the nursery home.

In this liminal space, a transitional plane from one condition to another, the essence of the work of the artist and of the Woman that exists in flux between these two spaces, is configured.

With the community, these concepts and ideas of work are worked on and in a joint creation, the first conception is requested that will serve for later materialization by the artist.

Here, the textile material is considered fundamental, with a deforming, transformative capacity, full of new possibilities, easily manageable and modellable, rigid and soft, enabling a controlled error, easily amended or patched, if necessary. A relationship in continuous process and metamorphosis.

“Conceptually, the solid window bars turned into softer, more permeable ones that melted the boundaries between inside and outside to create new meanings of our actions and thoughts. I usually make geometric interventions with textile strips on cotton table placemats that have been used by the last generations of women in my family or by women in general, in the domestic routine, as support objects for food and care. This approach is a contemporary continuation of a traditional practice, such as the geometric stitches on tablecloth, but also a type of deconstruction of the square… In order to maintain the non-hierarchical balance, the frames have the same size just like in the first series I’ve done, the interventions with textile ribbons on place mats. The contrast between geometric, sharp edges and soft fabric, textile ribbons or elastic bands are part of my artistic practice.” (Adelina Ivan)

In the piece “Conversation”, the folding/unfolding dichotomy is, therefore, a consequence/metaphor of the same non-hierarchical horizontal movement referred to above. This action-reaction between linearity and horizontality generates an idea of ​​equity, with a perfect balance between strength and fragility. It also “incorporates a series of repetitive lines as drawings. The work relates to the lines that either confine us or set us free. In order to substitute human interaction, I relived the contact between geometry and space, seen as a different code of communication and understanding. In this territory of coherence and disruption, the space and object merge on the principle of crystallization, generating a connection between the lines that shaped this more stable structure.” (Adelina Ivan)

Adelina Ivan (b.1971, Bucharest, Romania) is a visual artist with a conceptual approach to textile art, recorded performance, video and installation and with a growing interest in drawing. The basis of her artistic practice is a social and cultural critique of the conventions that have distorted an otherwise infinite realm of possibilities of enacting femininity. The fictional stories, personal memories and historical facts retrieve the social and political scrutiny over the female body and take on the role of preserving memory. Force and frailty are put into balance, exposure and protection, transiency and permanence, illustrating the idea of rhythm and repetitive movement discovered behind the purely abstract lines, grids, hidden content and patterns.

1996–1998 MA in Design at the National University of Arts, Bucharest

Technical label of the artworks: