On Sobremesa
Hosted for residency in Istanbul, 2022 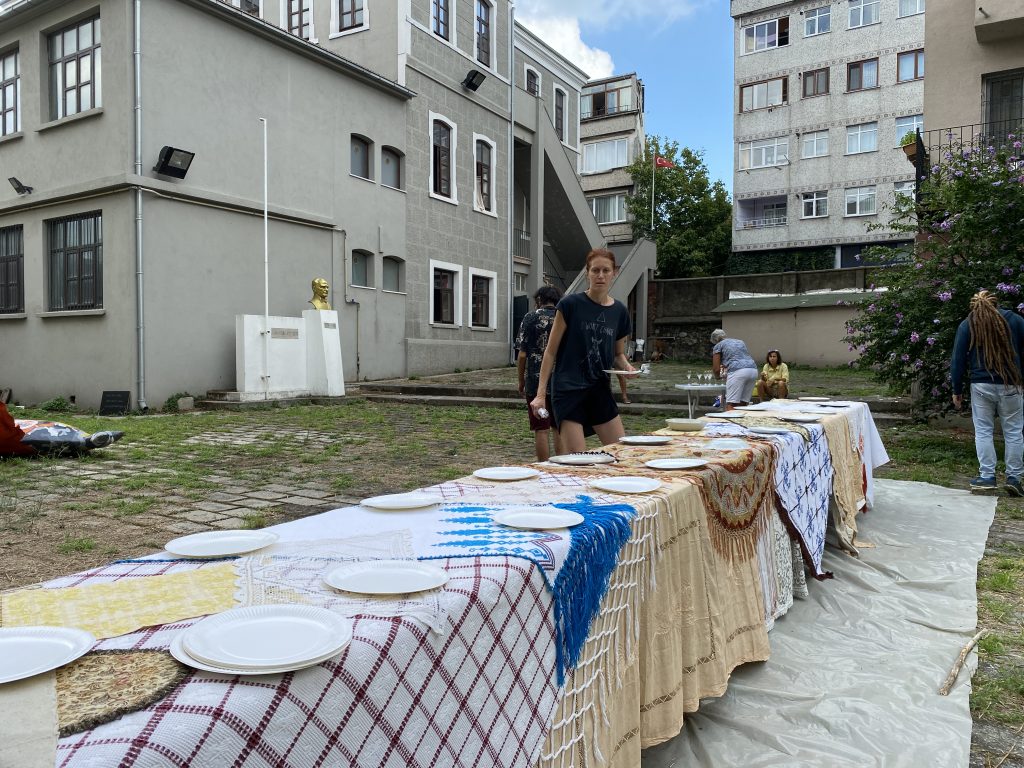 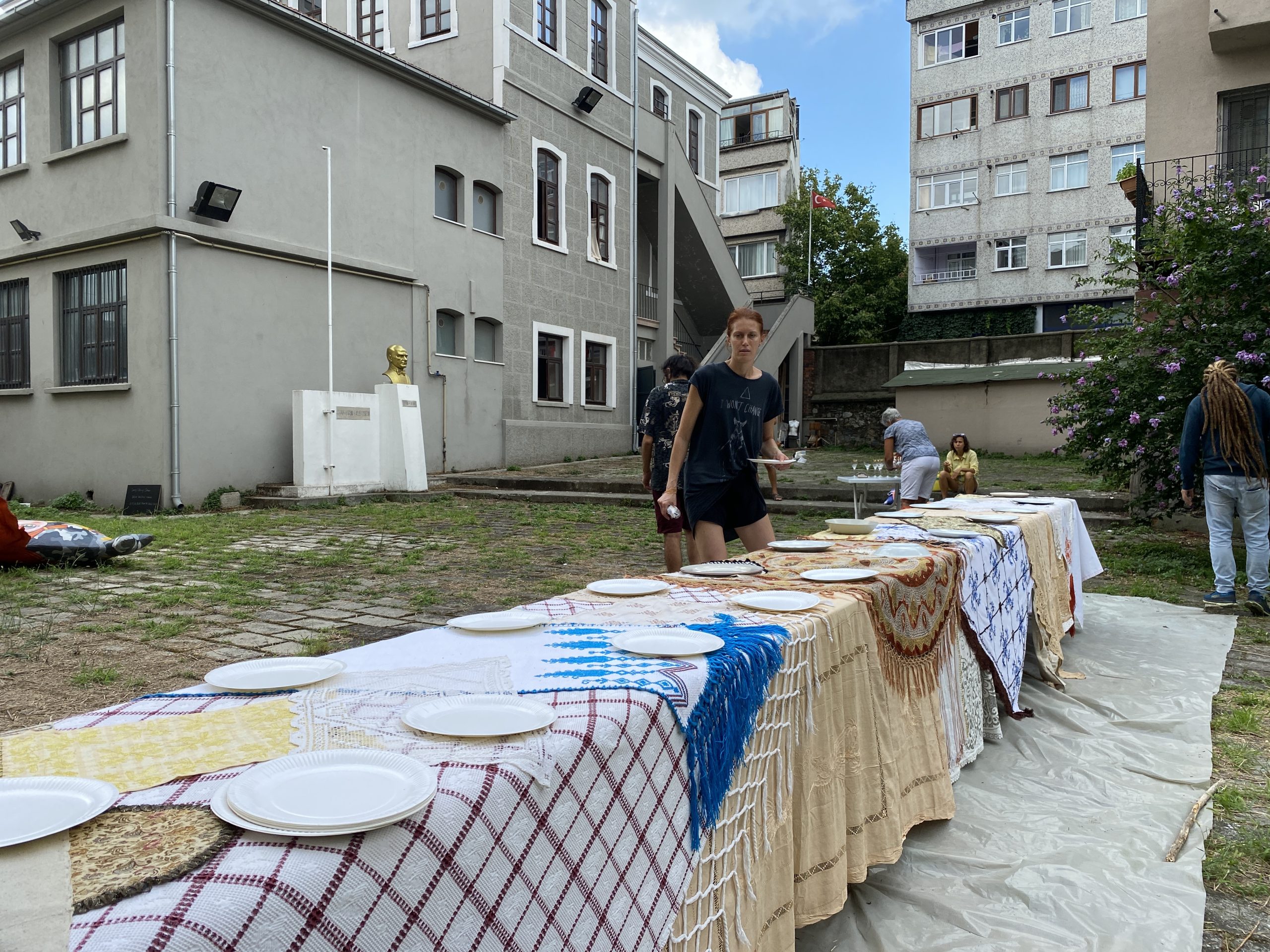 As a moving organization, Mahalla brings together cultural and artistic communities from different cultures with local and contemporary contexts organized in cooperation with civil society and grassroot initiatives/institutions that mainly work on mediating social harmony and peace. On the eve of the Mahalla festival, the 31st of August, Wednesday, MagiC Carpets artist Elena Urucatu made an invitation to Sobremesa, a performative installation that took place at Kurtuluş Greek Primary School and hosted a group of cultural actors and workers who directly or indirectly played a role in the realization of the 5th edition of Mahalla Festival: Palimpsest – a micro metropolis that allows a wide range of sharing and synthesising prospects of cultural knowledge and experience; the school was built in 1886 as a boys’ school, then co-educated in 1927 and closed in 2003 due to the lack of students.

At the dining hall of this old school, Sobremesa’s table was almost ten meters long, installed over a rectangular space of old Istanbul tiles; it awaited its guests with the layers of tablecloths and different chairs around it. Sobremesa means “time spent around the table after eating to rest and chat” in Spanish. For Elena, the table is a place where we celebrate and make decisions, like a canvas that shapes, defines, connects us and determines our daily lives. As a ritual of commemoration and confronting the way we understand culture and history, Elena Urucatu sees the table as a blank sheet of paper that allows you to eat, talk, write stories.

Installation consists of tablecloths gathered on the table in the same district of Istanbul, different from each other with their origin and design but above all with their emotional charge. Elena asks: can we go beyond their purely aesthetic, decorative and protective function? Can we get in between its layers? How do pain, hope, knowledge reflect on us from objects? Who wove them, which hands washed them? Hidden stories in each of them. If tablecloths could talk… what would they tell us?

At the eve of the festival, around 06:00 PM, guests started to arrive; Elena took each by the hand and led them to the table. Most of the guests were just getting to know each other, the rest were just meeting at that moment. When the dinner started, we were 25 people from all around the world that ended up at the same table, with microphones placed at certain points.

While Masha and Barış were carrying the plates to the hall, Elena was with her collaborator Mr. Estukyan in the kitchen. Sasun Estukyan, founding partner of Mezme on Kurtuluş’s Poyraz Street; their recipes come with stories; they cook to commemorate the past, while blending it with the present. Elena and Sasun’s selection of unforgettable tastes of Istanbul, loaded with individual and collective history as well as many identities and emotions – the menu consisted of Tahini pepper, topik, Circassian chicken and Muhammara. Mezme İstanbul’s introductions are very significant:

Tahini Pepper. Capia pepper, which entered our kitchen from across the ocean, was loved and adopted as if it were in its homeland, it was even dried and stuffed, and even made into paste to preserve it for a long time. When it came to this geography, it was inevitable that it would be roasted and introduced to tahini and walnuts. Ingredients: tahini, pepper, walnut, lemon, parsley.

Topik. In the tradition of the Armenian Church, there is a seven-week Great Lent period in which all animal foods are avoided. During this period, alternative oils obtained from walnuts, hazelnuts, tahini and olives are used in meals. Topik, which does not contain any animal food, is one of the most preferred appetizers of the Great Lent period. Ingredients: chickpeas, tahini, onion, pistachio, grapes, olive oil, cinnamon.

Circassian Chicken. One of the important delicacies that came to Turkey with the Great Circassian Migration in the 1860s is Circassian chicken. This appetizer, which is produced from materials that we frequently use in our daily life, is an interesting example in terms of showing the dimensions of the creativity of the cook. Ingredients: chicken, walnuts, garlic.

Muhammara. One of the areas where cultural imperialism alienates us from us is our kitchen. Since we have turned to the West since the Tanzimat[1], we have only been discovering and adopting Middle Eastern cuisine in recent years. Muhammara, which is very popular today, especially in the Antakya region, is an Aleppo appetizer in which garlic, which creates a feast in every mortar, is blended with walnuts, pepper paste, tomato paste and a series of spices. Ingredients: pepper, walnut, garlic, pepper paste, tomato paste, olive oil, cumin, zahter, rosemary.

25 people from 10 local communities attended the dinner. As the story of each guest at the table is unique, their meeting expands the cultural horizons of one another. As Urucatu quests to expand the audience-participant cycle with veiled testimonies and to reveal the untold stories by following the conversations, the three-hour event is perpetuated in four recorders; thus, conversations of Sobremesa are documented as audios and composed with blacked tablecloths to highlight the details of the installation.

At the table’s head, Elis and Meryem, from İstanbul, Kurtuluş, just next to them, Barbara, from Vienna. Next to Barbara, Roua, from Damascus, even though she is currently living in Amsterdam. Next to Roua, another Kurtuluş resident, Alper, the sound technician of Sobremesa, from Kurtuluş. Filippo is an artist from Rome, here for MagiC Carpets. Aaron is an artist from Malta who sits next to Damla, MagiC Carpet’s Assistant Curator from İzmir. And Matilde, from both Normandy & İstanbul, next to Talin, an Armenian artist from İstanbul, Kurtuluş, then Stavros, who is also from Kurtuluş. And Sabine, director of Mahalla Festival who has lived in İstanbul for 30 years. Dino is from İstanbul, Kurtuluş, he speaks 7 languages. Ona is from Vilnius. Then the table turns to Dimitri, one of the chairmen of the Greek School, and me; İlayda, I’m from Çanakkale. Next to me, it’s Ömer, the caretaker of the Greek School, and Sasun, the cook. Sasun’s name already refers to an old Armenian city in Anatolia, but he is from İstanbul, Kurtuluş. Next to them is Marisa, her family is the one of the last Jewish residents of the neighbourhood. Dilruba is from İzmir, sits next to Anna, from Vienna. Thomas, from İstanbul sits next to Ute Meta, from Singapore, she is one of the three curators of the 17th Istanbul Biennial. Next to Ute, there is Anna, she is from Russia but lives in Vienna. With Sema, the table ends; she is a resident of Kurtuluş, a local artist, also a member of various local organizations.

[1] Tanzimat, (Turkish: “Reorganization”), series of reforms promulgated in the Ottoman Empire between 1839 and 1876 under the reigns of the sultans Abdülmecid I and Abdülaziz. Source: Britannica.