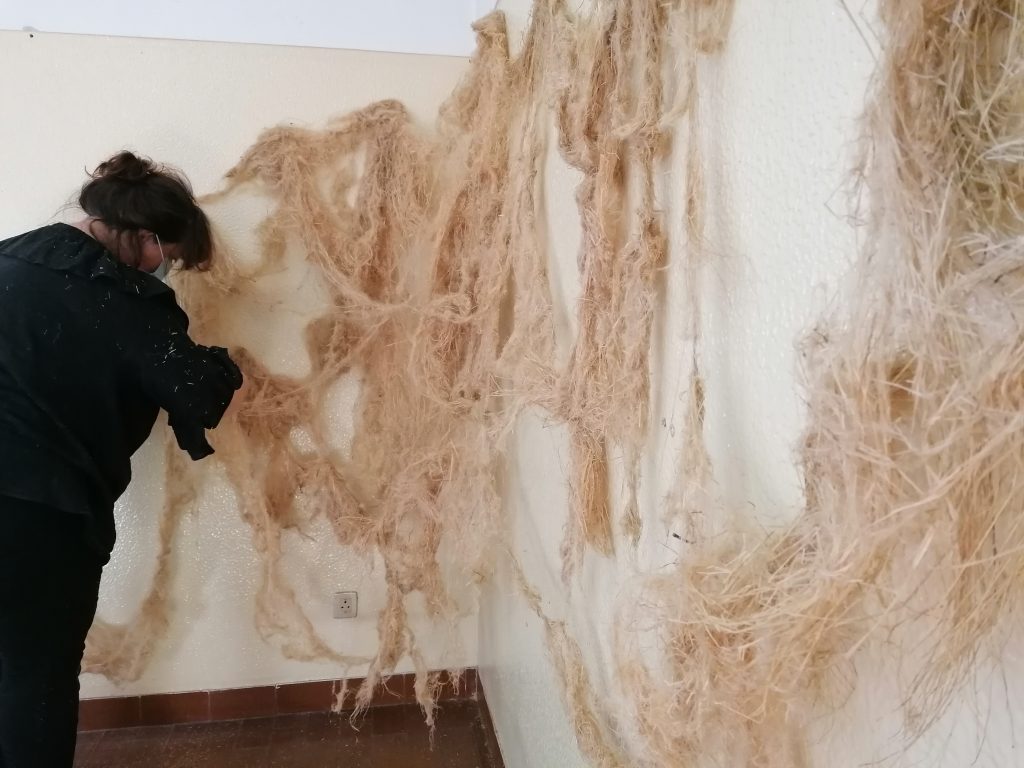 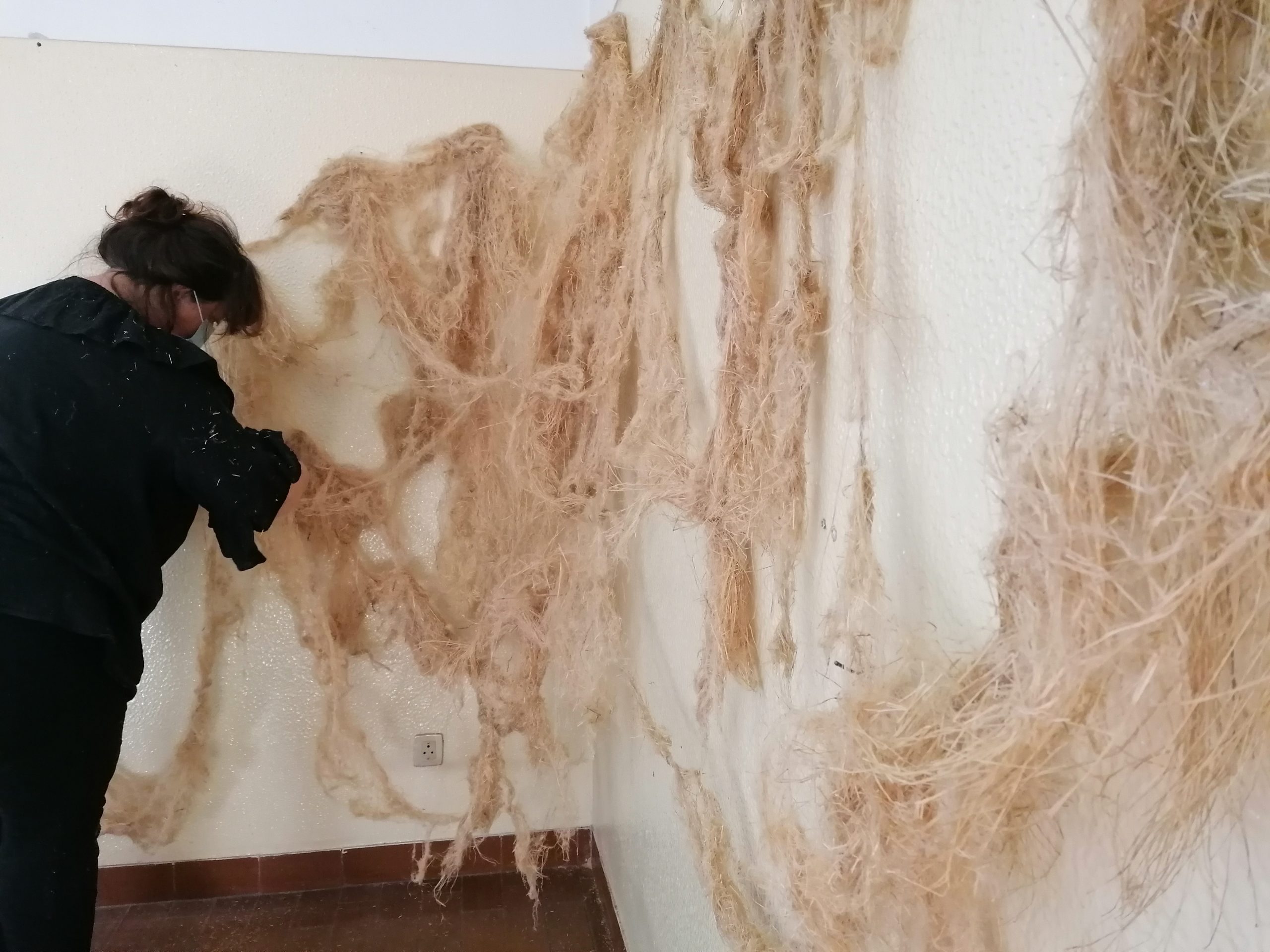 The possibility of a rewrite

The Portuguese artist Patrícia Geraldes held her residency in Guimarães, within the scope of the 3rd year of MagiC Carpets, integrated in the programming of the 5th edition of Contextile 2020-Contemporary Textile Art Biennial.

The residency started many months before her stay in Guimarães through distance meetings, conversations and exchange of information and research. An online working group was created with all the other artists who took up residence at the biennial. Thus, at the outset, the first working community was created, where all artists had an opportunity to get to know each other’s portfolios and discuss the projects of the residences, proving to be very beneficial for this exchange of knowledge and discoveries.

The local Portuguese artists were faced with an enormous challenge. They were asked for being the eyes, heart and hands of Contextile 2020 artists unable to travel to come and do their residency in Portugal, due to the Covid- 19 pandemic. Portuguese artists (Patrícia Geraldes and Paulina Almeida) responded to this challenge through the constant sharing of the experience they were creating with the space of artistic intervention (the sensory spectrum, the incorporation of space, the historical and architectural discoveries of the building itself, the city and its people).

The proposed place for the residence and presentation of its results – Convento dos Capuchos – the Former Hospital of Santa Casa da Misericórdia was of extreme importance here, since this site-specific intervention also alluded to the concept of Contextile 2020, “Places of Memory”.

The artist reflected on the curatorial proposal of  DIAGNOSIS – SPACE OF MEMORY (reflexion on the ontological issues related to the territory (of textile culture) in a meaning of the term terrain vague, space of nothing or place of everything.

It was expected that the new artistic production should not be apart from the intentions of (re)contextualizing textile art in contemporary time.

The artist was proposed a reflection based on the term Diagnose as a clinical topic, related to body and spaces. X-ray, search, research, discover, dissected, questioning the territory. Proposing the clinical term related to the subject, questioning body and / in space, intending to achieve the term of “embodied spaces”, able to link the physical and the immaterial and turning the absence (old, empty and void spaces ) into places, in the actual city.

The work proposal also focused on  confluence with the concept of the 5th edition of Contextile “PLACES OF MEMORY – Interdiscourses of a textile territory”: The territory and its textile memory provoke new thoughts and new artistic production one wants to rescue from the past, filtering and building it in the present, contaminating the future. Understanding the place through its temporal dimension, thinking and rethinking the definitions based on the relations that are established between geographic and identity space, social and political, artistic and aesthetic, of memory and imagination, thus insisting on the idea of place as an inhabited space.
Through reflective practices about a place or the resignification of a territory, considering and/or removing topics, it may be possible to give way to new discourses. Appropriating the memory, inhabiting the uninhabited, common or individual, the inane becoming alive.

Patrícia Geraldes was interested from the first moment in the traditional linen culture in Guimarães (from land to cloth), since this region, in ancient times, was a territory for the production of linen with great national and international impact. In fact, the culture and transformation of flax, an activity that was fundamental in the historical structuring of textile work in the Vale do Ave region, created spinning and weaving routines for domestic and market consumption, also creating a climate of appropriate know-how afterwards by the cotton industry.

It is in this time of symbolic memory of linen and its importance in the transformation and composition of a territory (gauging economic, sociological and even political issues) that Patrícia’s artistic work comes to a halt.

The artist’s work process began with a visit to the Museum do Linho – Corredoura Folkloric Group, where she had the opportunity to learn about the processes, tools and machinery of the culture and treatment of linen. Establishing contact with the community that makes up the rapids folkloric group and integrating it into the residency work was also an intention that was made impossible by the contact restrictions imposed by the Covid 19 pandemic.

The history of the said group was conveyed to the artist through an element of the community (its leader).This community (founded in 1956) aims to occupy the free time of the people of their land, the taste for dance, singing and music, was, and develops a real work of research and collection of uses, customs and traditions of their ancestors, and their region.

In the artistic intervention “Linen Drawing” designed for the lower part of the cloisters, we measure a clear approximation to the raw state of the fiber that calls us to the design of the fields evoking the organic movements, both of the bodies that work the culture of the line, or of the wind that shakes the fibers as if it wants to align them for the next procedures.

It is from nature that this drawing comes, from the idea of ​​the sowing ground, of the line. From the drawing that is formed with the material itself, presenting it not merely representing it.

This drawing is pre-written as well.

Time in the artworks of Patrícia Geraldes is presented under the condition of life and death.

The memory of the time there derives from suffering. The work, the fields, the harshness of the life of the bodies burned by the sun and the hardness of the earth. Then, emotionally, the memory keeps more impact, the suffering which is imprinted and which has the capacity to transform it. It makes it worse sometimes. As in an individual and collective rescue, revisiting gives rise to the present.

The act of writing, represented here by drawing through fire, is a long and careful process of passing and materializing the idea in words.

“The cloth as a support for drawing and painting, appears in ‘Writing time’ as the register of the gesture of burning. Layers of fabric overlap, accumulating drawings of fire.

What remains of the action of burning is the mark left by the flames, the drawing of the color of the charcoal.

If fire is on the one hand an element that consumes and destroys matter, if everything can turn to ashes, it is also a powerful element of creation and regeneration.

In ‘Writing the time’, the control of that moment between destruction and creation, appears in the form of overlapping and grouped contour drawings, recording the precise moment when the flame time goes out and gives way to ash and the burnt cloth.”[1]

In its double power play, the fire reduces, without blackening light but also healing, able to clarify the matter.

In the rough, the linen that provokes a mountain memory design and inscribes itself on the walls guesses the writing of time.

The artist also conceived and guided a “Draw with linen” workshop open to the community in general, in which the possibility for participants to contact with raw material and with procedural and experimental exercises in drawing with linen was opened.

[1] Text from the artist