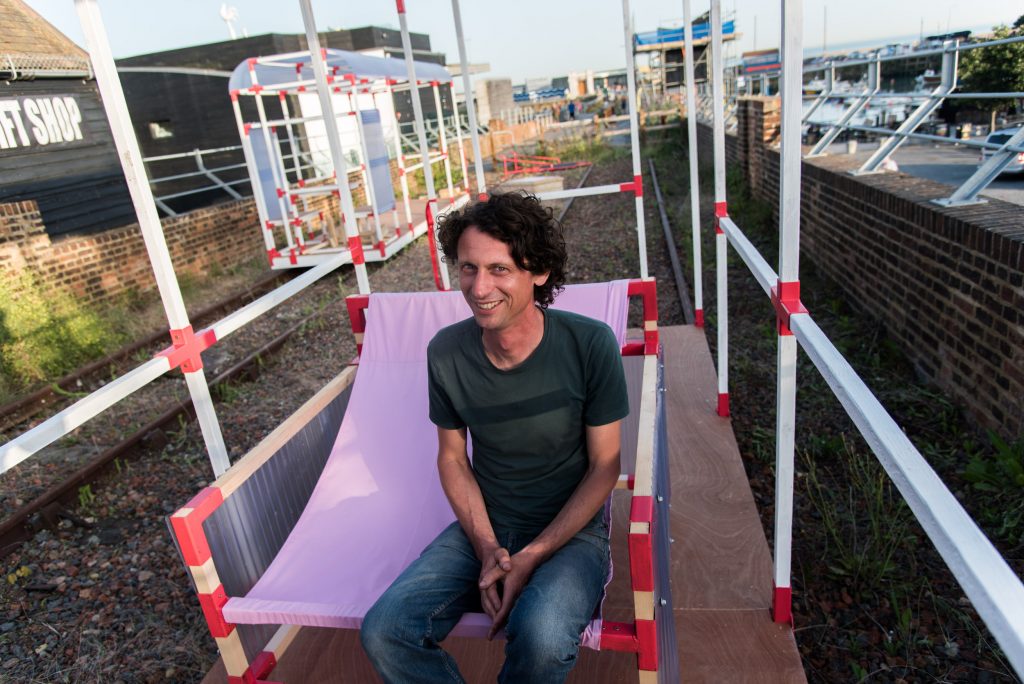 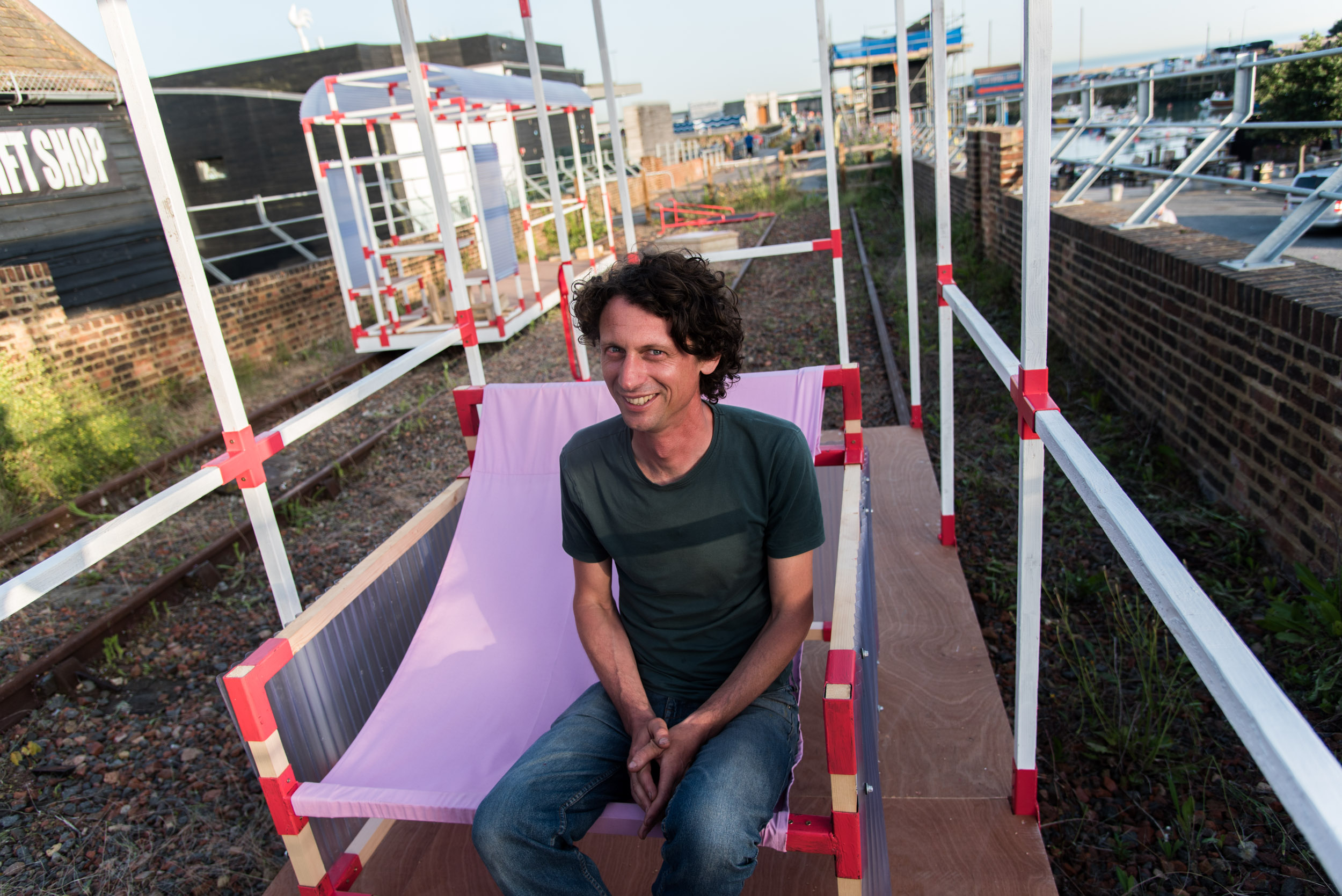 Patrick Hubmann’s journey from London to Folkestone by train was the first point of inspiration for his MagiC Carpets residency. This arrival reminded Patrick of his first and only visit to the UK 30 years earlier as a teenager on a language exchange trip to Eastbourne, a seaside town not for from Folkestone. This triggered his own memories of arriving as an outsider in another place.

Patrick built upon this initial idea by exploring the town and by using the rich historical resources available at Urban Room Folkestone, where Patrick was based for his residency. This public space also provided a great opportunity for Patrick to discuss his ideas, perceptions and to also gather these from residents and visitors to the town.

A previous workshop held at Urban Room Folkestone asked people “What local knowledge do you have that you wouldn’t find on a street map?” and “What would you like to see in the future in Folkestone?” People had written their memories, stories and facts and drew their future dreams of Folkestone onto a map. These future dreams included: more public swimming pools, an amphitheatre, cycle lanes, more greenery, a steam train and more beach cafés. This provided Patrick with numerous ideas about what could be included in his project and how other people could be involved.

The brief Folkestone Fringe set for this year’s projects was to create a project that would bring together two divided communities who live either side of the redundant harbour branch line railway tracks.

On reflecting on the brief, Patrick asked “What can we build which will bring people together and that everyone will be attracted to?” By gathering together everything he had learnt so far, Patrick decided that the answer to this question was clear. The train was the major force that had brought people to Folkestone in the past, turning it into a popular seaside resort half way between London and Paris and developed the town to what it is today. It is also something that people have a strong emotional connection to. So Patrick proposed that he would build a new train – The Grand Plaza Express.

The Grand being taken from The Grand Burstin, an enormous hotel overlooking the Folkestone Harbour and where Patrick played the popular retro leisure activity of Bingo during the research visit in April. Plaza being taken from the idea from a workshop called Let’s Play Plaza which considered alternative uses for an area at the crossroads of the redundant railway tracks, Folkestone Harbour and other areas of the town. The Express was taken from the famous Orient Express which passed through Folkestone in its heyday which is still alive in peoples’ memories.

The train would also contain other ideas gathered from the workshops; a public swimming pool and a dining carriage, creating a temporary packaged holiday for residents and visitors on the railway tracks.

On his return in June, Patrick and local practitioner Mitchell Bloomfield, set straight to work to build the Grand Plaza Express. With the help of residents and visitors, they started to construct the train carriages outside the Urban Room Folkestone. This communal activity served as an open skills and knowledge sharing experience. Patrick also held a series of workshops in the evolving train carriages with school children and other residents and visitors to the town. The workshops included, postcard designing, flag making, face in the hole painting and bag printing, all inspired by Folkestone and its identity as a seaside resort in the past, present and future.

These activities took place over busy 3 weeks, leading up to the final event at the end of June as part of the first edition of the Festival of Looking hosted by Urban Room Folkestone. For this, after many discussions, the Folkestone Fringe team managed to attain permission to access a section of the redundant railway tracks. The two train carriages were placed on the tracks, decorated with the flags and paintings made in the workshops. The Grand Plaza Express was launched at the beginning of the weekend with a carriage race along the tracks. The carriages were then open to the public to access over the weekend for them to enjoy their own packaged holiday aboard the Grand Plaza Express.

It was important to both Patrick and the Folkestone Fringe team that the Grand Plaza Express would have a life beyond the Festival of Looking. After discussions about the possible future uses of the train, it was agreed that the carriages would be used as a pavilion at Folkestone Harbour, located at the end of the redundant Harbour Branch Line.

It is also hoped that permission will be granted in the future for the train to run along the whole stretch of the Harbour Branch Line which, at present, is still unused. This performance would provide onlookers with a vision of the past use of the line as well as open discussions about its future possibilities.

Born in Graz, Austria in 1974, Patrick Hubmann studied engineering and interior design. He worked between 1999 and 2011 at ‘la Fabbrica di Olinda’ and ‘Servizio Educativo di Adolescenti in Difficoltà’ in Milan, Italy as a trainer, designer and workshop manager developing collections of household items and furniture produced by people with mental health issues, school dropouts, and refugees. As part of the Milanese collective ‘esterni’ between 2004 and 2015 he was responsible for the design and set-design of events in public space like ‘Milano Film Festival’ or ‘Public Design Festival’. Through the Berlin-based international network ‘constructLab’ since 2012, he participates in projects of temporary architecture, building and activating collectively urban spaces. In 2013 he moved to Porto, Portugal where he develops local projects in public space with community participation.