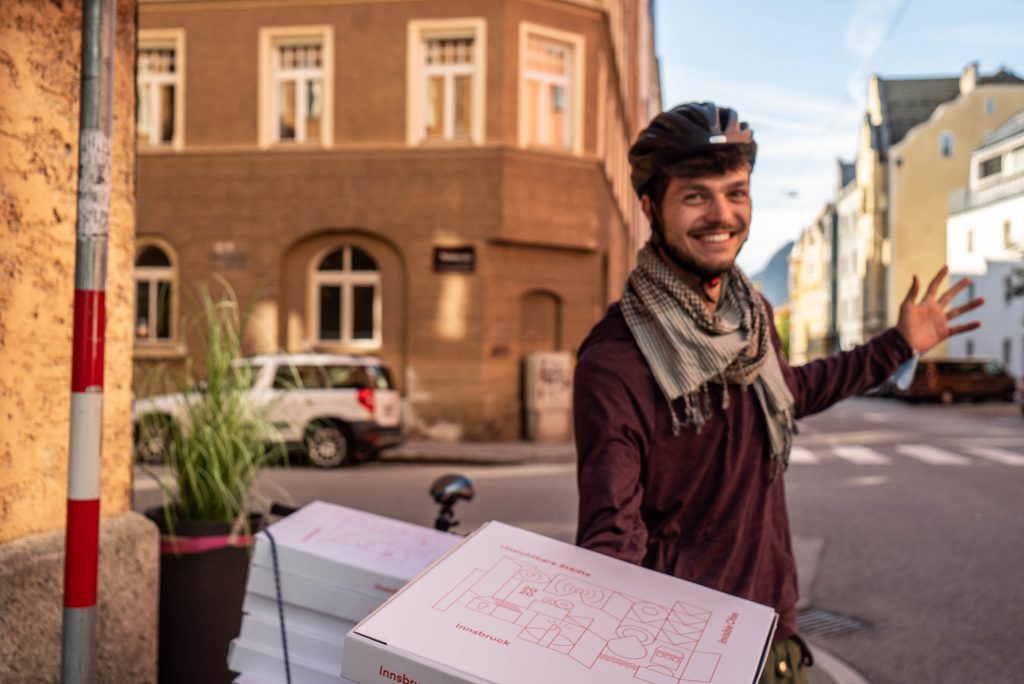 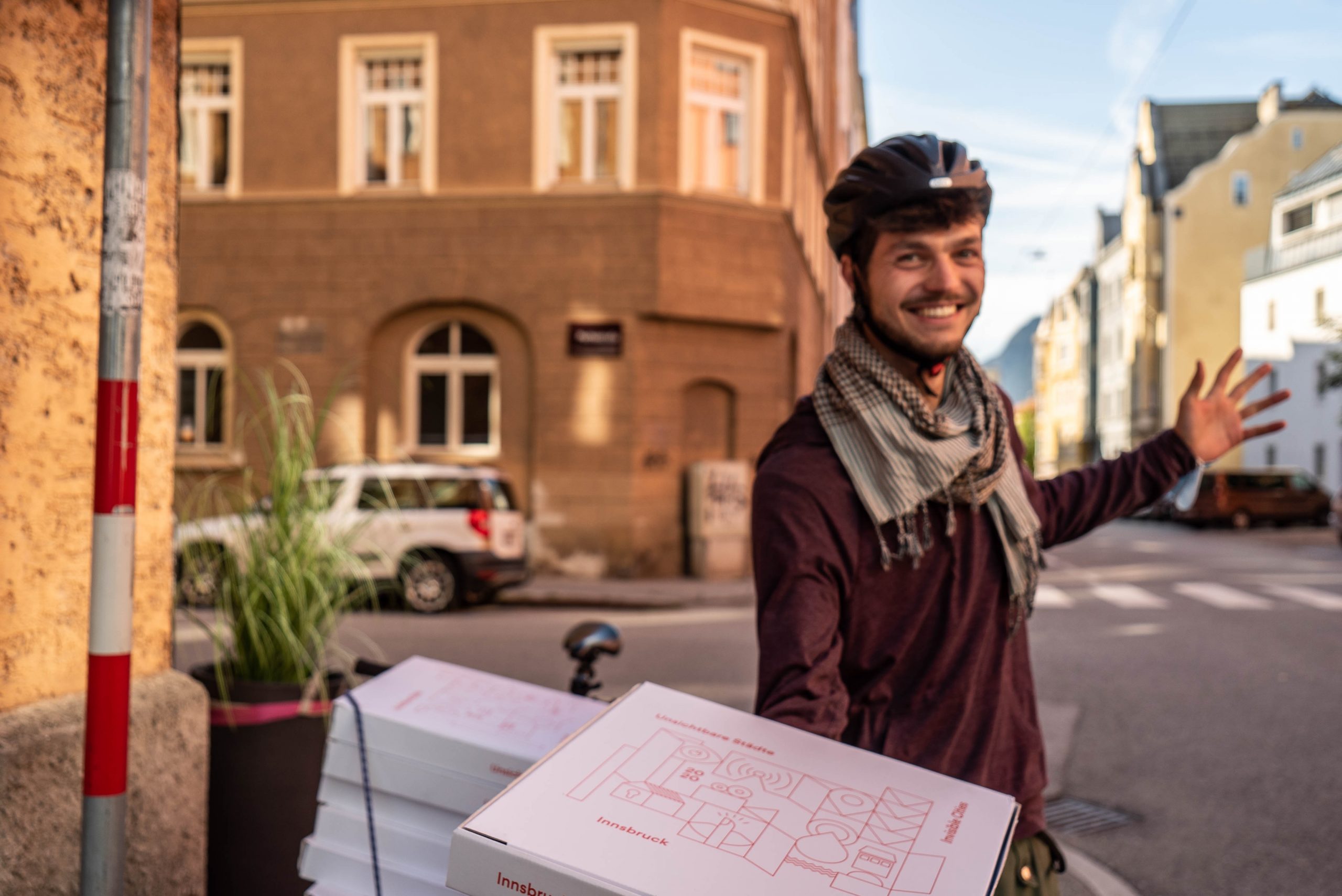 This is a story about the imagination.

With artist in focus: Peter Lorenz from Austria and Nicola Di Croce from Italy

Cities also believe they are the work of the mind or of chance, but neither the one nor the other suffices to hold up their walls. You take delight not in a city’s seven or seventy wonders, but in the answer, it gives to a question of yours. – ‘Or the question it asks you, forcing you to answer, like Thebes through the mouth of the Sphinx.’

Something attracted me very strongly to our local artist Peter Lorenz who was already a member of the MagiC Carpets artist family. With each new encounter and brainstorming of projects, artistic methods, interests and approaches, I felt that our minds clicked. I would speak about our work within MagiC Carpets (MC) in Innsbruck, he would talk about the things that interested him artistically and told me about one particular project he wished to develop further for Innsbruck — it was Invisible Cities. At one point, I decided to invite Peter to join us for the Project Year 3 of MC and offered him collaboration and support to this brilliant idea of creating a metaphorical book through various performative processes – a book dedicated to our city. Back then, we didn’t know what kind of storm was actually coming our way. We were not aware of what we would be going through together, and that this would be one of the most unique experiences for us in 2020: the feeling of togetherness and having a partner at hand to rely on — even through the heaviest storm one could ever imagine.

During several months in 2019 and 2020, but especially during the residency time and project presentation from August to November 2020, the developing process of Invisible Cities for Innsbruck was marked by incredible creative forces that translated into multiple directions: research was seeded, collaborations sprouted, exchange and networks opened up, experiments on co-creative thinking were initialized. All these sparked new forms of powerful artworks, which added to the value of artistic and creative potential in society as a transformational process.

In 2020, the MagiC Carpets Residency Programme came again under the sign of solid collaboration structures. Our main partner, the performance collective The Doing Group, headed by the above-mentioned artist Peter Lorenz, caught our attention with their special approach to the act of ‘doing’, and their very constructive and open way of questioning things in society. Using performance as a means for inquiry and a way to produce new realities, was an approach we wanted to include in our program.

We continued our collaboration with the electronic sound Heart of Noise Festival in Innsbruck, which had been our main program partner for two years by then. Another incredibly valuable support, and a local success story, was our newly gained partner, the Grassmayr Bell Foundry, whose expertise is absolutely an insider’s secret in the city. It’s one of the few surviving bell foundries in Europe, and one of the largest bell manufacturers in the world! Grassmayr supplies bells for various religious groups in more than 100 countries on all continents since 1599. Whenever you hear the sonorous sound of a bell ring in the air, it very likely comes from Innsbruck. Grassmayr’s bronze cast bells are said to be the Stradivarius among bells!

Besides this — but no less important — we developed an ample local network which consisted of a diversity of local organizations from art & culture, media and community groups as well as various creative hubs, technology centers and entrepreneurial ecosystems, including but not limited to p.m.k Plattform mobile Kulturinitiativen, Hackerspace – IT Syndikat, Cera-Lab_explorations in design and architecture, Theater Monopol, Vorbrener, Innsbrucker Verkehrsbetriebe, Printshop Pirchner, and many more. The network played well together, and the members supported and complemented each other perfectly.

MagiC Carpets focused — in addition to the social dimensions of performative practices — also strongly on sound art, which applies new technologies and rather scientific approaches. But this year’s interests also involved creative processes, experimentation of new art forms, participatory and collaborative methods and cross-disciplinary works that would reflect and contribute to solving the new situation under the COVID-19 pandemic. It was not the easiest job to do, yet still not impossible!

Our venture started off with a reinterpretation of Italo Calvino’s Invisible Cities and ended with the investigation of new possibilities to make the collective experience of art in a situation of social distancing possible. On the one hand, it was of most importance to encourage methods that would enable international collaboration between artists, curators and producers, and on the other, to also succeed with a pandemic-proof cultural program that could still be enjoyable to the public.

As a process-oriented performance project, Invisible Cities Innsbruck circled the exploration, documentation and discussion of a wide range of lived perspectives and invisible versions of Innsbruck. Through workshops, interventions and participatory performances, we made this happen in various public places throughout the city.

Our idea was now to rewrite Invisible Cities as an open multimedia format, in which each chapter would capture and reflect various impressions of Innsbruck. We examined the intersections between the real, the memory, and the imagination, and asked, what perspectives, lifestyles and living spaces actually exist in Innsbruck, and how these could be portrayed performatively.

Invisible Cities Innsbruck proved to be another exploration of urban and social co-existing. Now, let’s see what this means:

With the help of more than 12 artists and our main project partner, The Doing Group, we united a wide range of practitioners to produce a varied range of perspectives. Never have I witnessed such a powerful and creative driving force (starting from the fact that we were deep in an unknown pandemic territory).

Nicola Di Croce, one of the artists in residence suggested by Latitudo Art Projects from Rome, created a piece titled Three Collaborative Scores for the public space. The architect, musician, sound artist and scientist whose research lies somewhere between urban planning and sound studies, explored urban sound environments in Innsbruck. The resulting piece in form of a multi-channel sound performance kicked-off Invisible Cities as “Prologue” within the frame of the Heart of Noise Music Festival.

In times of social distance and closed borders, Nicola has developed a process that challenges participatory methodologies and aims at approaching different perspectives and intimate atmospheres of Innsbruck. Working together with five local artists – Milena Meller, Anna Lerchbaumer, Lucas Norer, Lukas Moritz Wegscheider, Andreas Zissler – Nicola proposed them to respond to a series of scores aiming at triggering their sonic memory and to focus on their relationship with Innsbruck.

As a result of this collaborative process, the performance has re-introduced in the public space the imaginative sonic portrait of the city as experienced by the artists during the pandemic period. Within this framework, the performance intended not to merely reproduce these recordings, rather to create an abstract layer, a reframed “invisible city”!

As member of The Doing Group and experienced theater maker, Peter Lorenz engaged strongly in multiple directions and on different levels of the project – as a director, co-curator, producer, performance maker etc. Through collaboration with 5 further local artists, he developed a participatory (digital and interactive performance machine) performance piece that fit cleverly into a pizza box. Each box was home-delivered to the audience on a cargo bike in order to collect imaginative cityscapes through audience participation – descriptions, sounds and shapes. These individual perspectives were processed into videos – 20 individual “chapters” – and presented as “Epilog” online, as well as installation in a public space (in a pop-up city model made of pizza boxes) as part of the Innsbruck contemporary art festival PREMIERENTAGE.

The idea of the mobile installation was to put the diverse voices of the city in spatial dialogue with one another in order to discursively understand Innsbruck’s identity and to negotiate together. Local artists such as Johannes Payr aka ludwig technique, Jan Contala, Philipp Schwaderer, Eleni Palles and Stefan Rasberger also played key roles in the realization of the project and its presentation.

I would like to express my sincere gratitude to all participants in this year’s round of MagiC Carpets. Together we have faced quite unimaginable situations, each of us personally, but also as a team. Particularly the word “together” strikes this whole year’s of challenging but amazing work. My thanks go to Peter Lorenz for his incredible energy, knowhow and courage to have initiated and conducted this work! Thanks to the whole team around him, which is full of amazing talent and professionalism: Eleni Palles, Johannes Payr, Stefan Rasberger, Jan Conatala and Philip Schwarderer. Thanks to Nicola di Croce for his commitment to overcome all obstacles in this international cooperation during the pandemic, and his ability to calm down the craziest situations. Thank you to the wonderful team woven around him with Milena Meller, Anna Lerchbaumer, Andreas Zissler, Lukas Wegscheider and Luckas Norer. I am very grateful to have also worked with the wonderful Johannes Grassmayr, owner of the bell foundry, who relentlessly opened his arms. This project would have, of course, not been able to realize without Chris Koubek and the beautiful Heart of Noise Festival. Thank you, Christina Schmölz and the local documentary team. Big thank you to Startaparat from Vienna, who shaped our thoughts and ideas into online formats.

Many thanks to Pirchner Druck, the writers of the texts, thanks to IVB, the Municipal Transport Service, and to all the sponsors and supporters, who believe in this project. I thank the good man from Italy, who owns a print studio in Germany and personally delivered the custom-made pizza boxes to us in Innsbruck. Many thanks to our media partners for their support, and finally: thank you to all the brave and creative participants: The residents of Innsbruck who ordered “pizza” spiced with culture, and thereby contributed with their stories to the entire project.

Maybe now you know what I am talking about, when I say that the work of openspace.innsbruck embedded in the MagiC Carpets platform is built on trust in an incredible network and its diversity of collaborators.

We can hopefully continue to prosper within this creative garden of ours in the years to come.

In Calvino’s Invisible Cities, Marco Polo recounts to the ruler Kublai Khan stories from the multiple and fantastic cities his adventures had led him to. However, the descriptions of these fantastic places turned out to be the phantasms of a highly inspired mind, as his imaginatively detailed reports all turned out to be several versions of one single city: his hometown <3