“The Merge” by Marija Nemčenko
Hosted for residency in Kaunas, 2022 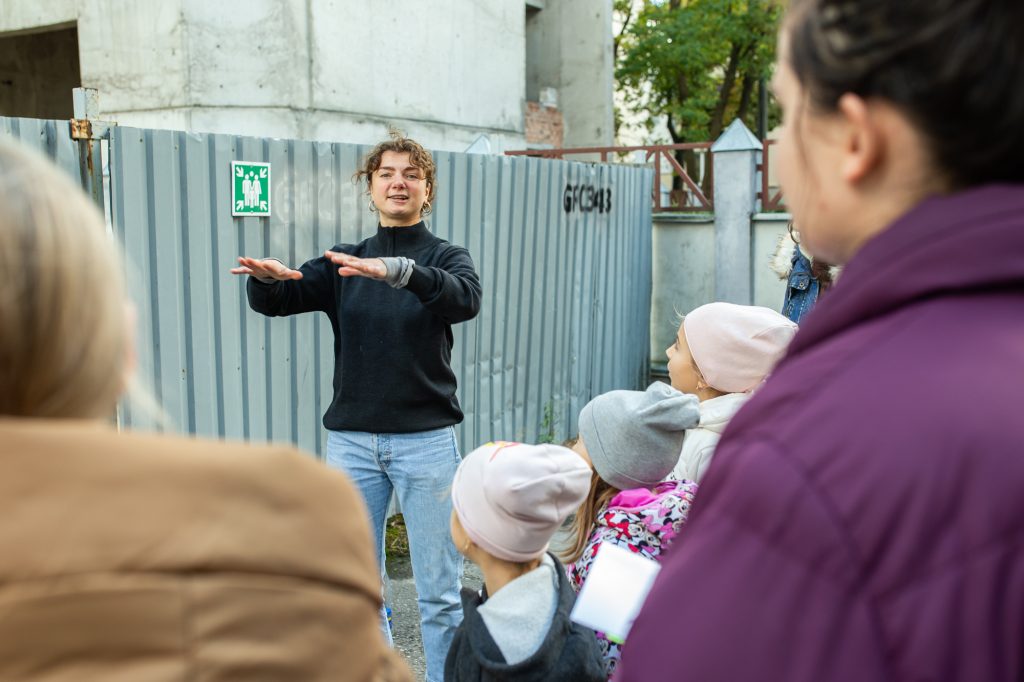 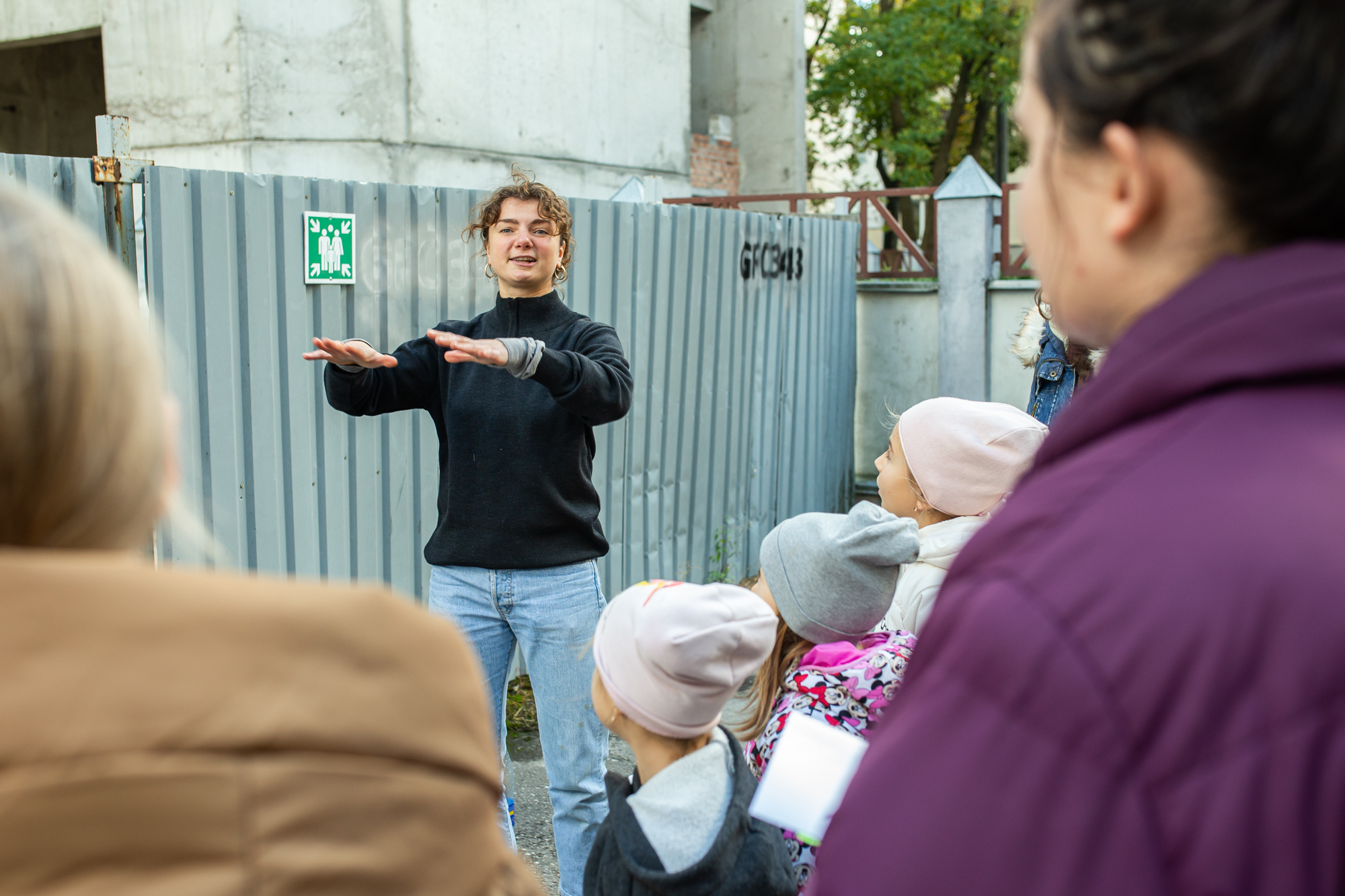 “The Merge” by Marija Nemčenko

After the large-scale war in Ukraine was started by Russian invaders at the beginning of this year, the Lithuanian society felt strongly affected as it still remembers the national trauma caused by the Soviet occupations. Therefore, “MagiC Carpets” project “The Merge” in Kaunas focused on the newly established, yet equally important Ukrainian community which has found refuge in the city. Various cultural and social institutions offered quite a wide range of activities for Ukrainian people, yet only a minority of such activities focused on their inclusion into the local society. Therefore, the project’s main idea was to unite and gather the Ukrainian community with the local citizens of Kaunas.

When investigating community centers for Ukrainian people here in Kaunas, I was surprised to find out about the non-governmental school “Herojus”, which is special in a few ways. It promotes beautiful values such as creativity and empathy, as well as learning based on experience and reflection. In 2022, the school opened a new branch for children from Ukraine, where they can learn from Ukrainian teachers and their work follows the curricula based on the Ukrainian education system. The issue, however, is that children from Lithuania and Ukraine who attend “Herojus” school have lessons in different school buildings, thus, creating not only the national and cultural, but also the physical distance between the two communities.

Three artists from Poland, Portugal, and Lithuania joined this project to suggest creative methods and help unite Lithuanian and Ukrainian children. They came for the “MagiC Carpets” residency in Kaunas and invited students from “Herojus” whose age ranges between 12 and 16 year-olds from both school branches to participate in the afterschool workshops. They were implemented based on each personal artistic practice, yet open for the co-creation, and cooperation processes within the community and the artists. Ukrainian-English translator helped to communicate during every workshop. The group was dynamic, a bit different in each meeting, with the total of 35 children who have participated in the project.

One of the artists was Marija Nemčenko working between Lithuania and Scotland in the interdisciplinary field of arts and arts education. She investigates the cultural connection between Eastern, and Central Europe as well as the Middle East, which she expresses in terms of migration. It comes from a personal experience of migration from Lithuania to Scotland and subsequent cultural assimilation to the UK. Marija is looking critically at cultural stereotypes and historical parallels, as well as at the construct of the periphery.

In her recent artistic practice, Marija is investigating the fireweed plant. As it spreads both by root and by self-seeding, it is known as a migrating and a partisan plant. It usually grows in open areas with little competition, being one of the first plants to appear on disturbed sites such as logged or burned areas, reconstruction sites in the cities, or places ravaged by war, which makes a beautiful connection with the topic of “The Merge” project. Blossoming in pink little flowers, fireweed prepares the dirt for other plants, playing the role of a “soil doctor” in the area. The plant is also known as a medicinal herb used for Ivan Chai tea, which serves as a good preventative measure against cancer, strengthens the immune system, and has many more great qualities. It is a common herb in both Lithuanian and Ukrainian nature.

Marija invited students of “Herojus” school to explore partisan horticulture and to get to know fireweed which not only heals the earth and the people, but also (metaphorically) the connections between the people. In the workshops for children, fireweed became a symbolic link between Lithuania and Ukraine, as well as the two branches of the “Herojus” school.

To offer a new perspective to the project, Marija invited an expert, Aušra Vismantaitė. Recently, Aušra has been engaged in research on the pre-colonial landscape, plant migration, various agricultural techniques, horticulture, and collective memory. She worked on the concept and structure of the workshops for “Herojus” school together with Marija and presented to the group of children what is this plant, and what kind of breeding ground is good for the fireweed. The group was invited to know each other better by imagining everyone as a particular plant and creating a soil mix out of various dirt, clay, and other organic materials. Children mixed it with the seeds of the fireweed, that Marija collected herself. The next day, that mix was compressed into “seed dumplings” from papier-mâché clay that children decorated with biodegradable colors and glitter.

During the last meeting, the Ukrainian-Lithuanian group of children got outside the school. “Seed dumplings” were thrown along the path between the school’s branches seeding them in partisan horticultural way across the city. Marija prepared little stickers for each of the dumplings, so everyone could mark the locations in the maps of Kaunas where their fireweed seeds were planted. The locations for planting were chosen for a reason. One of them was across the abandoned “Britanika” hotel fence, where the territory was now turned into an old reconstruction site, which fitted perfectly for fireweed to start growing. Moreover, on the Nemunas Island where the Ukrainian branch of the school is now settled, and the yard of apartment buildings where the children’s playground is turned into a car parking spot. The act of planting the fireweed seeds was beautiful and symbolic. Every student wished greetings for each of the “seed dumplings”, which, given the suitable conditions, will sprout into pink flowering plants over time reminding about the relationships built between the children from Ukraine and Lithuania.

For the final result of “The Merge” project that was presented as part of the “CityTelling festival”, Marija borrowed a photograph of Gintarė Žaltauskaitė. It was made during the last workshop where the sparkling “seed dumpling” is visible thrown above the fence of “Britanika” hotel. Marija embroidered the picture and sewed it on the maps with fireweed planting locations made by children. The artwork was shown in exhibition “The Merge” in modernistic open spaces of the school.

Even though Marija’s concept was inspired by the migratory origin of the fireweed plant, it developed into a project full of different layers and symbolic details. All of them created the conditions for the kids to feel more comfortable with each other, to get to know the differences and similarities between the cultures and get rid of the language barrier simply by using tactile methods. It was a valuable experience not only for the students of “Herojus”, but also for the whole project team and artists that provided an example of how co-creation can make a positive effect on people.