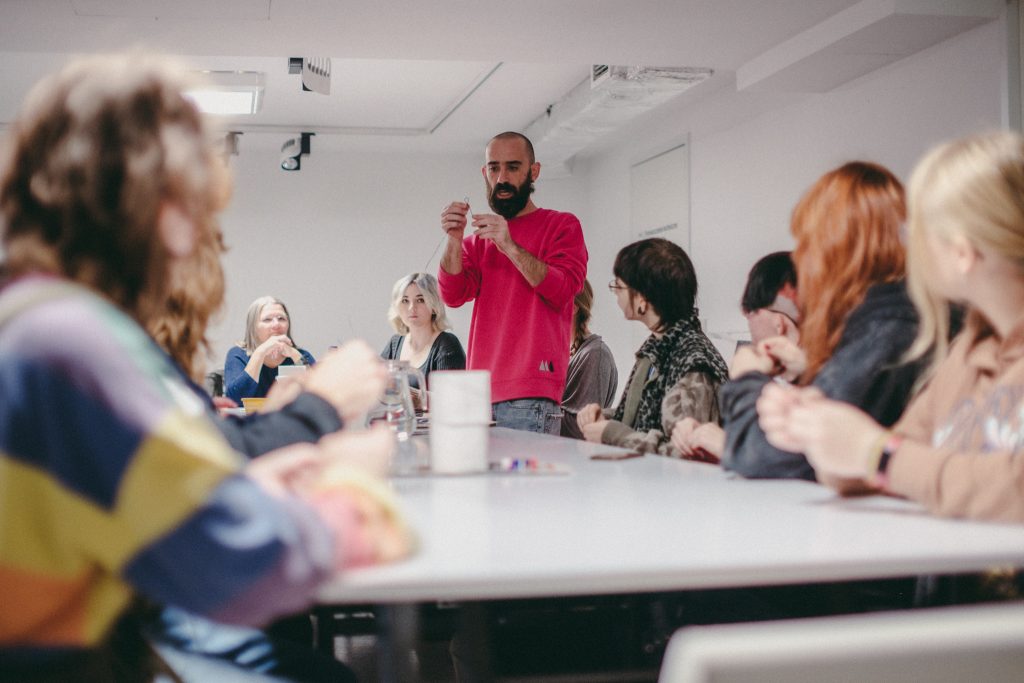 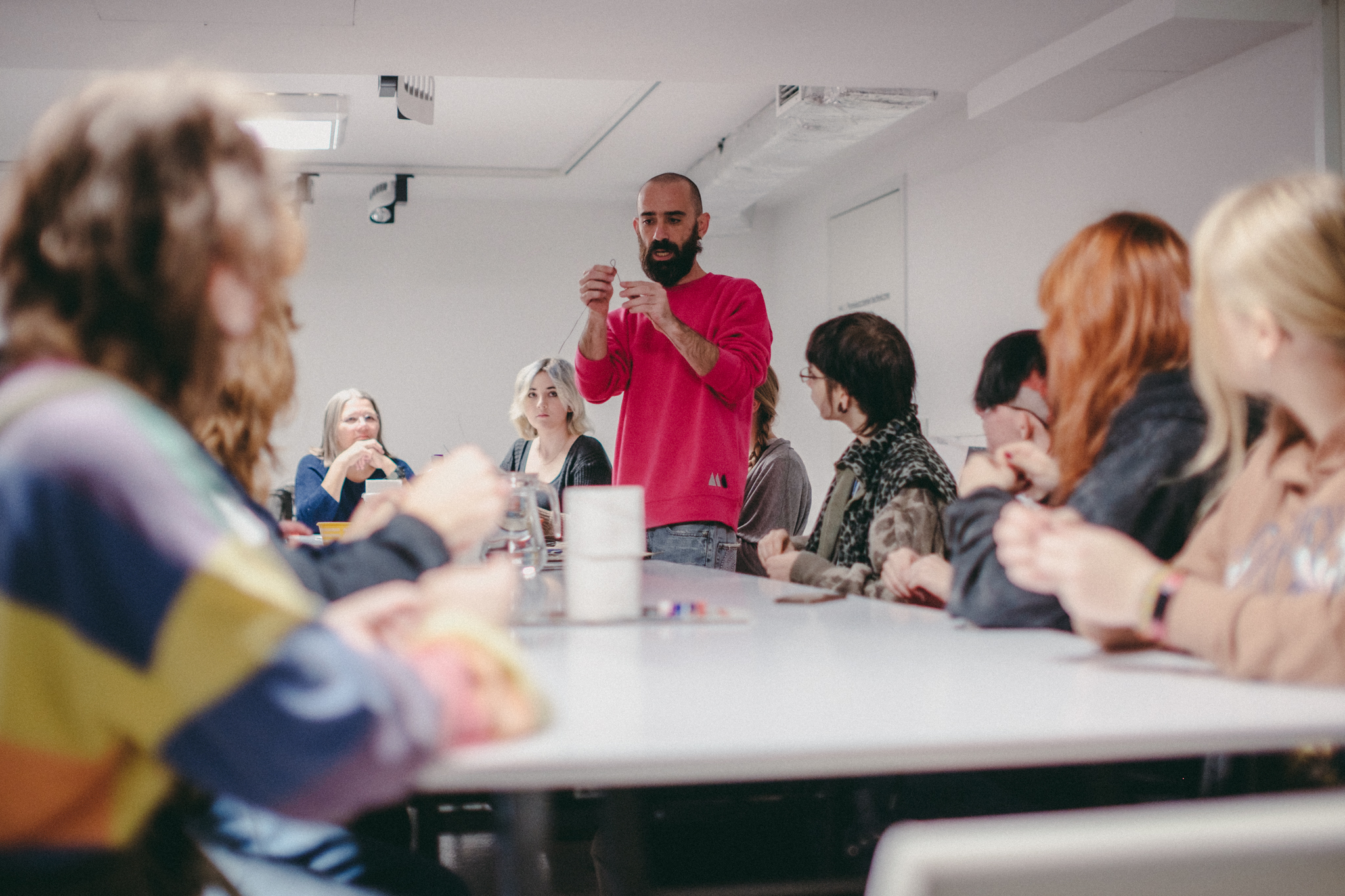 Creative invitation, collective drawing, and storytelling. How did URKA work with youth?

The fourteenth of October marks the beginning of the story about the residency of street art artist and illustrator Davide D’Angelo aka URKA. Wrocław Institute of Culture (WIK) hosted this resident as part of MagiC Carpets magical journeys. For one month, URKA worked in the space of Barbara, where the head office of the institution is located. To get an idea of the character of this space, you need to know that it is situated nearby the city’s market square, hosting not only cultural events organised by our institution, but other initiatives as well. It is a space for work, meetings and leisure by many Wrocław residents, including newcomers just getting to know the city. Not surprisingly, URKA also wanted to tame and get to know the location. It was particularly important for him to be among the visitors, to talk to the workshop participants and to collectively create an exhibition as the finale of his residency.

However, the work with the people of Wrocław and the new inhabitants of the city began long before Davide arrived. In summer, the idea came up to invite people to participate in the workshops in an unusual way. The artist created creative invitations in the form of small DIY boxes, which were sent out to the group before the first workshop held at the Barbara. For the first meeting, the participants had to bring a paper object telling an individual story. While it is clear that the personalisation of the template helped us create a diverse collection, seeing them together at the project’s closing event was touchingly coherent. The art was the tongue of the story of the co-creators. The youth which participated in the project created small works of art that inspired our resident artist for the rest of his stay. As URKA repeatedly emphasised during the workshop, he was keen on finding the common language. According to the artist, “such a search begins with respecting each other’s worldviews and choices, with the importance of each person’s subjectivity within a larger community. Our diversity is what makes us alike.”

The hexagonal boxes were not of a random shape. The whole concept for the residence was inspired by the short story “The Library of Babel” by Argentinian writer Jorge Luis Borges. The story described the universe as a huge library made up of rooms in this shape. In this library, practically any book could be found; it is up to the visitor to decide which one to read. During the workshop, URKA told the group the story about the Library of Babel and that in its collection, there is a book about each of us. Therefore, while I was working together with Davide, we thought that the exhibition would be exactly a library/story about the participants. Hence the title The Yourself Library, under whose banner the residency took place.

During the workshop, Davide placed great emphasis on experimentation and the needs expressed by the group. He developed several meeting scenarios and adapted his ideas to the dynamics of the classes. It is worth mentioning that he came to Wrocław with the intention of working with new artistic techniques, and many ways of group work he had wanted to try out for a long time. One of these was collective drawing, which involved making one drawing with the hands of several participants. Each participant had to create a short drawing and word story about themselves on a A4 sheet of paper. The next step was to cut out the elements drawn and put the fragments in the middle of the table, into a bank of inspiration. The whole group drew from the bank, mixing the cut-out elements creating a unique collage. Some added further hand-drawn pieces to the designs or passed them on to others to draw until the sheet was full. The experiment was a lot of fun for the group and a collaboration between the participants and the artist was born, the longed-for common language began to sound understandable.

The group work proved particularly important for the morning workshop group: it was one class from the S. Kopystyński Secondary School of Fine Arts in Wrocław, which is a neighbour of the Wrocław Institute of Culture. Thanks to URKA’s residency, we worked together for the first time. It was a unique group, because it started its high school education in the era of pandemics and online classes. 2022 was the first time they visited the school on a regular basis and were able to socialise outside of computer screens. As the teachers recalled, the opportunity to work collectively, practice art together and talk to URKA strengthened the bonds between them and they also learned new artistic and experimental drawing and sculpting techniques. They also learnt that there is a place like Barbara that is open to them.

During the residency, we also took integrative steps with the Ukrainian House, a place where Ukrainian families currently live, located in the neighbouring Ofiar Oświęcimski Street. Having identified the needs and possibilities for joint action, we set our sights on integrating the Polish and the Ukrainian youth during an afternoon workshop. Working with a group of young people was an important curatorial lesson, showing how such cooperation is based on trust and building mutual relations.

On the ninth of November, the artist and workshop participants gathered for the conclusion of The Yourself Library project in the Barbara’s Reading Room. There were collective drawings that looked like one big map hung on the wall. A sculpture consisting of hexagonal boxes and a papier-mâché sculpture were also shown for the first time. The highlight of the meeting, however, was the inspiring discussions over tea, handing the thank-you posters and diplomas, and taking photographs of the exhibition together with the young co-creators of this project.

EVENTS CONNECTED WITH THE RESIDENCY

Closing meeting of the project combined with an exhibition of works and refreshments, 9.11.2022

WIK has been active in residencies since 2015 under the name AIR WRO. Since then, it has been actively involved in supporting artists and hosting international artists and creatives. Particularly important to us is the creative process, i.e. the creation of an artwork and the ideas that accompany it. Very often, this part of the artist’s work preceding the creation of the actual artefact, plays an equally important role in the artistic development.

WIK is a partner of the international platform MagiC Carpets, which brings together more than a dozen cultural organisations. URKA’s residency took place thanks to the MagiC Carpets network and collaboration with the curator Paola Farfaglio representing Latitudo – Art Projects.