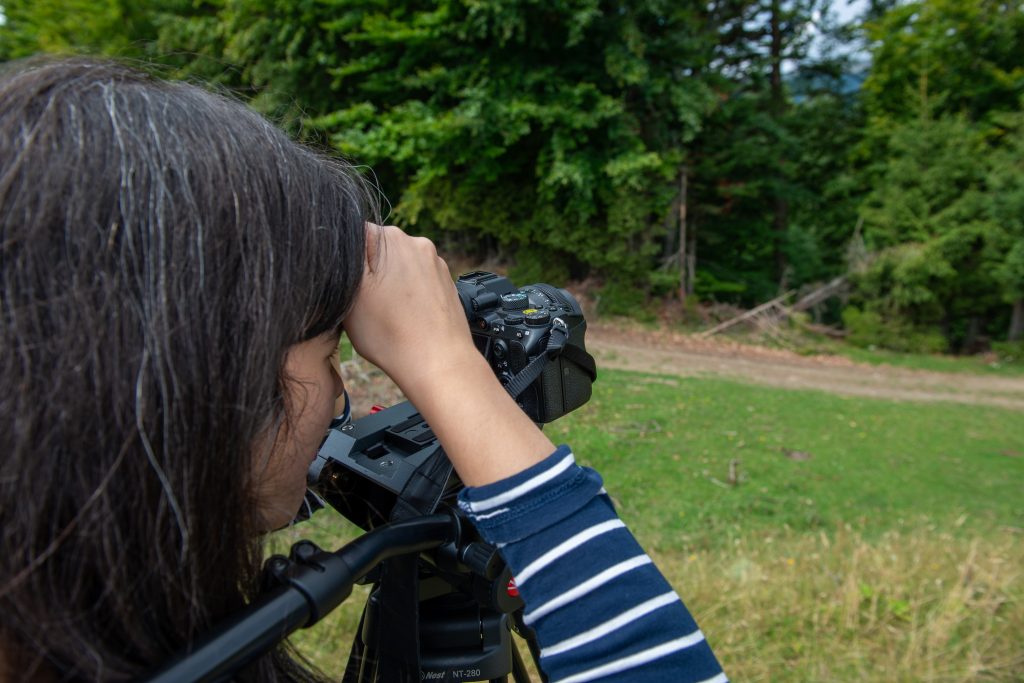 “Look, there’s a girl here, a filmmaker, who would like to talk to cool young people around here and make a short video about what it’s like to be a young person in Slon. The film won’t be online, just some artistic project for the residency. Would you like to participate? It won’t take too much time, around 20 minutes, and the conversation would be simple – who are you, what do you do, why did you remain in Slon, etc. What do you say? I will also participate; I think it will be very cool.”

Alina Manolache’s practice stands at the intersection between documentary cinema, artistic research and education. So far, she has navigated topics like post-communist generations (Lost Kids on the Beach, IDFA 2020), surveillance (I AM HERE, Jihlava 2020), space exploration (2020: A Covid Space Odyssey, The Guardian 2020), youth (End of Summer, Visions du Reel 2016), museums (Your Visit Starts Here, Centre Pompidou 2015) and human-machine relationships (3 Dialogues About the Future, in production). When we started to talk about the project to be developed during Meta residency in Slon, Alina was interested to meet young people, 18 to 39 years-old, who still live in Slon and chose not to leave the country.

Studies confirm that before 2007, when Romania joined the European Union, 3.4 million Romanians have left the country, accounting to almost 17% of its population. Another survey confirms what people have been discussing informally, namely that young people themselves intend to migrate. “They don’t just wish to leave the country; they have made concrete plans for leaving. […] 47% of young people in Romania in the 16-to-35 age bracket had clear intentions, even plans to leave the country within the following 5 years […].” (University professor Dumitru Sandu, from the Faculty of Sociology of the Bucharest University, contributor to The Youth Mobility international study).

A film made by Alina Manolache in Slon was like a laboratory/ a study of cultural anthropology at first – she had a set of things she wanted to follow, but without having a pre-established and precise result from this process. She wanted to meet people close to her own age (mostly millennials/ younger/ older), to have a talk with them, to take their pulse, being flexible and absorbing as much as possible. And Alina knows how to ask questions, to listen, to leave a room for thoughts and to let the stories flow. And you you can be overwhelmed by how open the people of Slon can be, and how much they have to say.

“…at first I wanted to let things come to me, unfiltered. When I was doing research and meeting people, everything was very intense, new, fascinating. But, as I began to edit and process the material, I needed to cool everything down, take a step back, tame the first impulses, and reach a temperature, where I could also invite someone else to watch what I had done and understand what it is about. I think having other colleagues in the project constantly around to exchange ideas helped me a lot to find this balance: we discovered places and things together in real time. It’s very valuable that when you work, you can be in dialogue with other artists who may have a different perspective, or come up with other ideas – the project is enriched, and I think that we, as people, have also been enriched through all this transfer of information and emotions.”

As she progressed with these discussions, Alina realized that they all had some points in common: night dreams and fears of a generation – especially in relation to the natural habitat and more specifically, to wild animals. “It was surprising to me how close to nature the interviewees were and how many stories they had about bears, foxes, jackals and wolves. It was a superb metaphor for the demons of the youth, and the images they gave me automatically sent me to fairy tales. So I think I was really lucky to be able to have their almost fictional stories as a starting point – and then to search for different ways to echo them visually. I played with light and darkness, with the natural and the artificial, and of course with dream and reality – in a film that I find more sensorial than narrative. In a way, my whole experience was incorporated in the film: how I experienced the stillness of the landscape, the sounds, the changes of weather, how I felt about people and how this place altered my perceptions.”

“Wild Creaturesˮ. A landscape from nature. Birds chirping. Deer grazing. Drones patrolling in the forest. People searching for something with flashlights. A jackal’s howl. What is the colour of fear? A few young villagers tell us about their encounters with wild animals. Inoffensive and ethereal at first, their stories take us by the hand into a labyrinth that becomes darker and darker. At the edge of fear and imagination, dream and reality, the film invites us to question who the real “wild creatures” are.