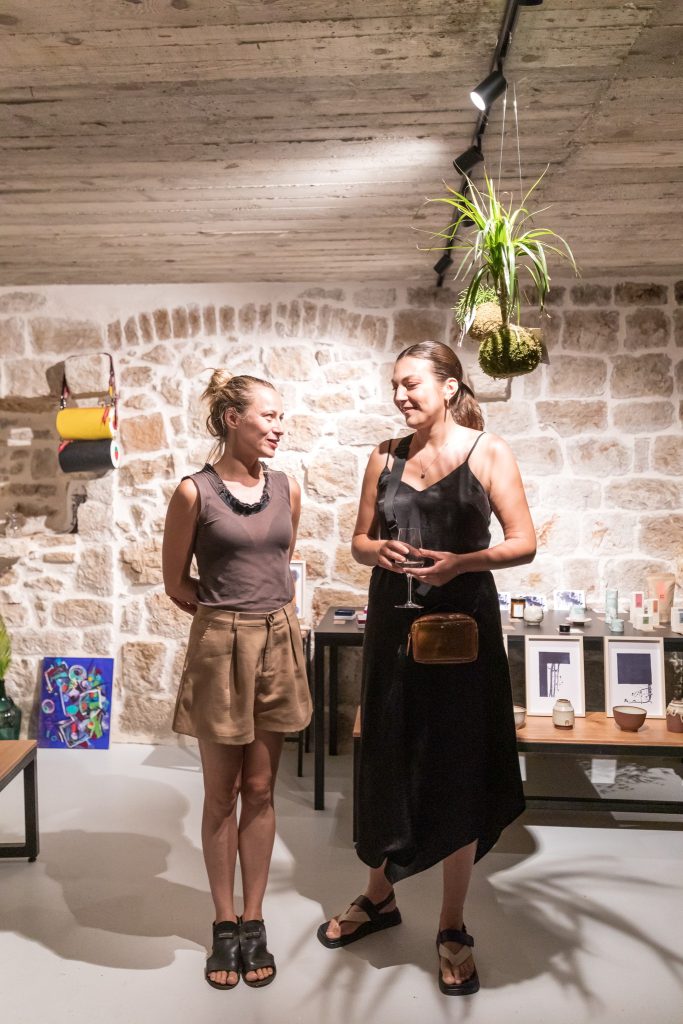 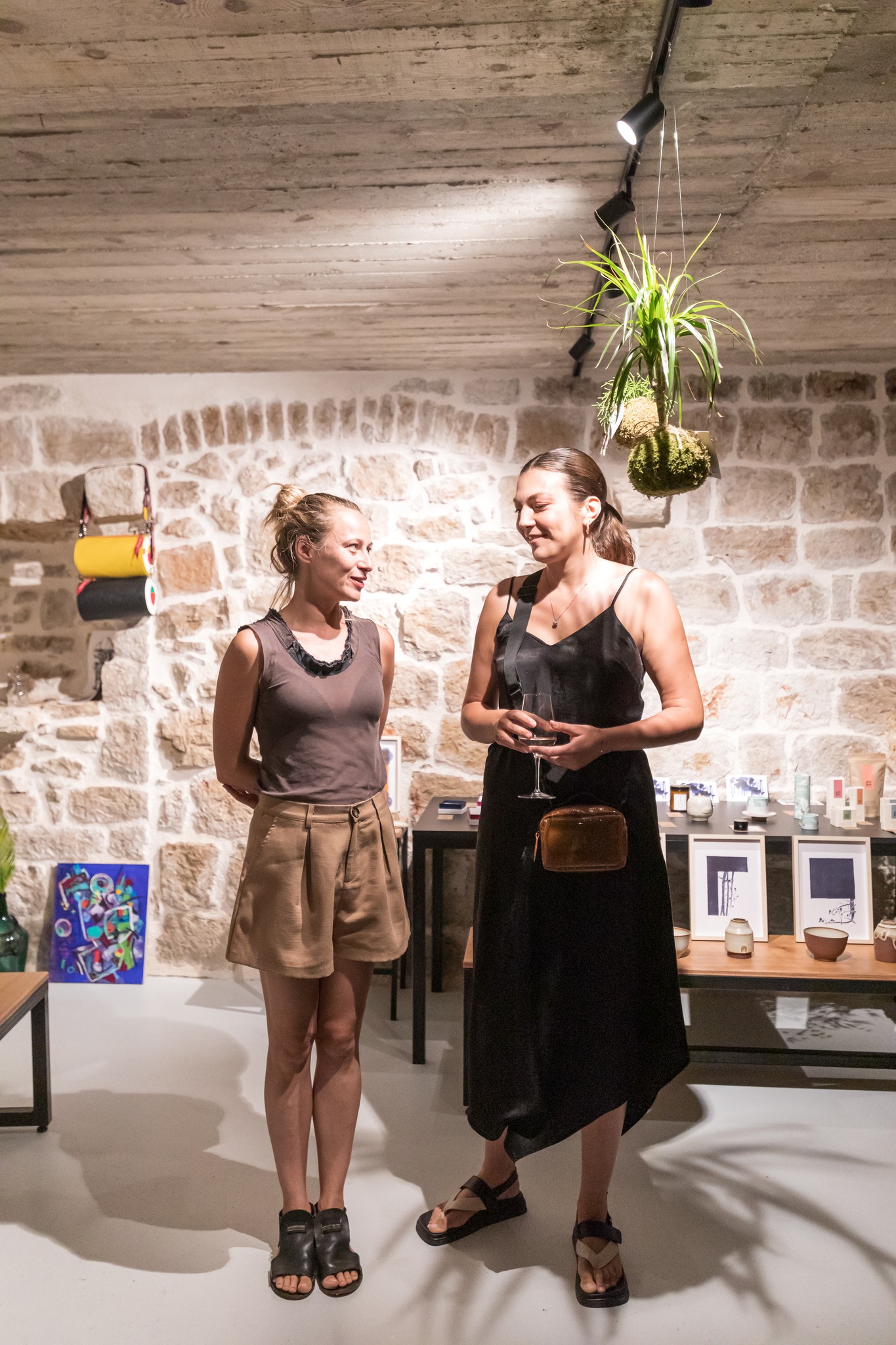 Josipa Slaviček graduated from the studies of architecture and spatial planning at the Faculty of Architecture in Zagreb, her field of scientific research include islands and their future in planning. Moreover, she is part of the organization committee of the NGO ‘The Anatomy of island’. In her artistic work, she uses the media of spatial interventions, visual and digital arts and writing. The aim of her art is to raise the awareness of importance of sustainable coexistence of nature and man, questions of social responsibilities, to visualise unpredictable future and dreams, emotions and relationships. By using digital manipulation as a direct link between the real and virtual worlds where different rules apply, and through the creative expression, the artist wishes to bring people closer to the vision of the possibilities of the world that surrounds us.

With the name of the Exhibition Utopia (san se), its authors Josipa Slaviček and Francisca Rocha Gonçalves (SINØ) want to draw attention to the issue of sea levels rising, as it is predicted to reach the height of 1 meter by 2100, and 5

meters by 2150. With their video and audio installations, they intervene in the space of the kola (street), submerge it with the symbolism of water in order to evoke the ambiance of the utopian water world that we can expect if, as an island community, we do not start to question man’s (in)activity on the sea and the coastal area. The video visuals are inspired by the elemental properties of water such as motion, specularity and reflection of light, and the human influence on changes in the sea using digital manipulation as a direct artificial influence on the nature of things. What we can hear are underwater sounds that, due to the physical properties of water, can be recognized even at great distances, and marine animals use them intensively for communication, navigation and hunting. They were recorded with hydrophones sensitive to the vibrations created by people near the sea with their machines and vehicles, causing underwater noise that affects the organisms responsible for creating the balance of the ecosystem.

It is the name of one of the rocky seas on the Moon’s surface, formed by volcanic eruptions, which are shaped by strong storms, this landscape still unknown to us. Stimulated by the period of Saturn’s opposition which blocks our previously established foundations and personal roads, Jelse Street temporarily changes its function and becomes a time portal. Historical passage to carry ships to the sea, the texture and configuration of the floor is changed by using building stones from the quarry, devastation from the beach of the Church of St. Luke, heralding the arrival of a new wave of change. By passing through the portal, we live the moment of the emotional and sensory experience of being on the surface of the moon sea, and the position of the passer-by’s body in space of reduced height encourages to question the stability of the personal gravity of each individual. Knowledge of healing the power of walking barefoot on stones was lost during the change of generations and the change of lifestyle. With a goal remembering the knowledge of our ancestors that we have forgotten and questioning what kind of place we want to leave for future generations, passers-by are encouraged to take off their shoes and experience the complete experience of passing through a time portal of new possibilities.

The project follows the process of observation, reflection, research, experiment and performance of the sign during the 2020 pandemic in Amsterdam. The generator of reflection on the topic was sociological and political changes that affected me as an individual and so on the very unpredictable development of the idea that started in April, by collecting photos of signs on the street with instructions on keeping the distance. The decision to create a personalized sign came as a conclusion of the research,’ individuality is accepted, but only within the already given parameters’, and determined the location in space, the participants and the design of the sign. The endless linearity of the Dutch landscape, the shyness and curiosity of the cows, and the geometry of the sign which erases the space are used for the observer to recognize diversity and predetermination in the combination of emotions and elements through a simple but guided performance. The design and operation of making the sign were left to the decisions of material availability, tools, shops that were still open and thinking about transporting the sign to the location on two bicycles, with the help of Dora Ramušćak. Probing was created and grew through the process of making collages, and photogrammetry and optics are played the main role in the preparation of the set, anticipating the scenography of the photo. Personal attention was paid to the documentation and digital manipulation of the do-it-yourself process in the bicycle garage, and reveals the focus of a person indoors space and time. The width of the sign is a symbolic 1.5m, and the height is up to 2m, adapting to the country of the Dutch fields.

The modern world increasingly affects the communication of society. Today, the Internet is an artificial landscape, a conditioned medium for conversation, relationship and expression. The starting point of the project is precisely the concept of connection, a virtual contact that we perceive it as real, but it doesn’t actually exist physically. We are connected to people within the imagination that intertwines within virtual networks. Within this system we witness the process of action and reaction. An individual can be equally emotional Affected over the network as in the physical world, but at the same time in the “virtual world” we witness the loss of individuality. The individual is isolated within a network that seems to be all connected, and he himself becomes a “puppet” in the system to which it adapts, and which is adapted to it as a user. Interference, as the main description of the project, tries to show a wacky system within the physical space we live in, placing an unknown body that it moves around the space unpredictably and creates holes, obstacles and surprises passers-by. Colour red was used as a contradictory colour, as a symbol of love and power that affects people equally in any world or dimension, it is up to the passer-by to understand the message intended for him. The project was created as part of the Scenography course at the Politecnico di Milano, and the approach was architectural and design, made on a scale of 1:1 and presented in the form of a performance. The body consists of the following parts of the space: a wall, a corner and a pillar carried by 3 people like backpacks, dressed and united in a red cloth.

What inspires you as an artist? Relationships, global future, colours of the sunsets

What do you think is the purpose of art? To share the message we feel towards others