Jacopo Natoli and Guendalina Salini
Hosted for residency in Lviv, 2020 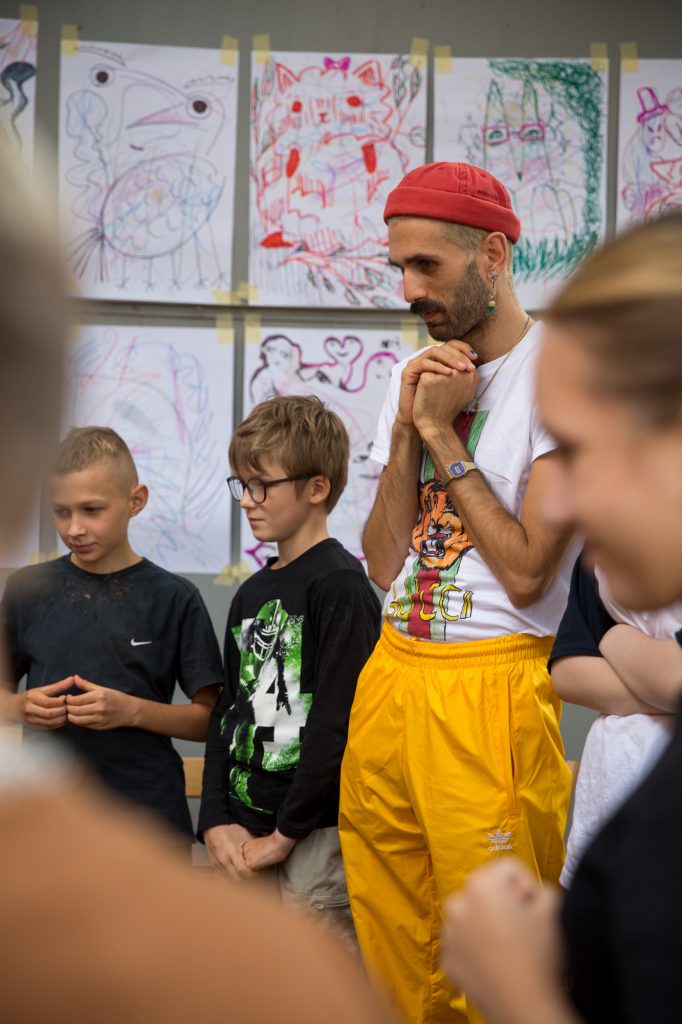 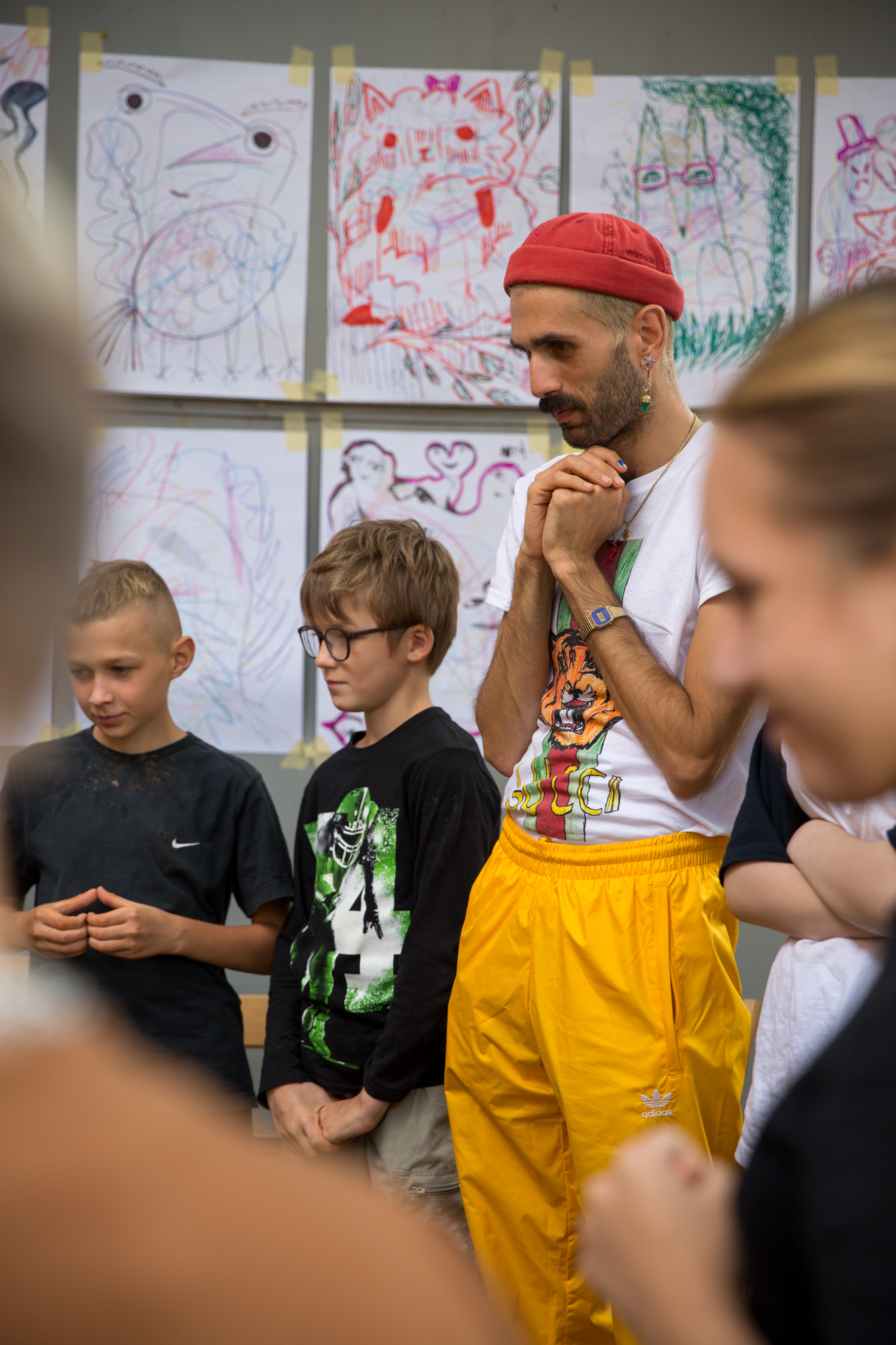 “I am where I am fine” is the core topic of the artistic residency in Lviv organized by Jam Factory Art Center.

The topic was chosen as a result of curator’s research of post-industrial Pidzamche district in Lviv which has no infrastructure, and observation of its depressive state, its transformation period on the one hand, and reflections on how Jam Factory Art Center, which is situated on Pidzamche, could contribute to positive changing this environment on the other hand.

We focused on teenagers who are in their turning point from childhood to adult life, and who are in a fragile state. Together with artists we tried to give them other images of bright activity, doing things together, sharing and co-creating in their area, their Pidzamche. We hope that having tried once, children will stick to this experience. The main idea of “I am where I am fine” is to remember that at any moment, we can ask ourselves about emotional and physical state, and each of us has the opportunity to change the situation for the better. Art gives a lot of freedom. Using a variety of art practice, we managed to feel and to live symbolically many important moments with participants and to gain crucial experience. That is something that will stay with them forever.

We involved the active centers of the area – the Library Under the High Castle and the Hnat Kotkevych Palace of Culture which became our reliable and good partners. Some workshop meetings were hosted by partners, some by AIR Space of Jam Factory Art Center and some were organised in a public space and this way we gave the participants the courage to use what they have in Pidzamche area, to come there and make themselves heard. Together we managed to create a free and safe space to be together, to make art together, to reflect and to speak up.

International and local artists were invited to “I am where I am fine” residency project.

Jacopo Natoli and Guendalina Salini (Rome, Italy) came together with their rich experience of working with children and communities. Despite the fact that they had not met each other before, they became a wonderful duet and created a community from all the participants. Contributing with their different media practices including performative and game tools of creation, Guendalina and Jacopo equally took part in leading the workshop.

Italian artists had one week to visit many places on Pidzamche, to hang around the neighbourhood, to see the city and in this way, they developed some ideas which were really connected to the “here and now”. Together they conducted a series of workshops inspired by Donna Haraway’s theory and developed the theme of community formation and its interaction with the environment. The goal of the workshop was to create a “unique body” among the participants in order to build up an open and potential space for freedom, desire and imagination.

The group started with ritualizing a common mutation. All participants had the opportunity to imagine, visualize on the drawing, express and comment their own mutation in contact with other mutations. Then they created homes for the mutants, modeled with clay. At the same time, participants were asked to create a gift for the whole community. Someone gave the fountain, someone gave fire or a hammock, and that united all of the participants. It was a special day of thinking also on such questions as how we organize our spaces, how we organize our time.

Participants gave external form to their creations: depicted them in drawings; made for them masks and costumes that reflected their bright personalities; created clay houses with special functions and characteristics, which were then combined into a common space. They have built a village, a community, a place where you can feel good, safe, being together.

Our new creatures filled the public space of the Pidzamche district around the Jam Factory Art Center with posters featuring slogans and images that undermine the meaning of gender, race, position and relationships. Treating the city streets as a space where residents have the right to loudly express their aspirations and release their creative energy, the participants formed a critical mass, which gave a powerful force to the group, the newborn guerrilla artists!

Participants’ next meeting on the Palace of Culture theatre stage prompted the new creatures to share collectively the statements they wanted to voice to the city and the public. Inspired by the history of the workers who created the Palace of Culture for themselves, our beings created their own political demands. Then it was time to act and to ritualize the community and the “body”. Teenagers, artists and the team split into groups and developed musical choreography. Everybody danced for each other, everybody danced with each other.

Finally, participants went out on Pidzamche streets and took pictures of their creatures. They have combined their own transformations with the transformations of the surroundings. Based on our slogans and their own portraits, they created large billboards and presented them to the public space as bright talismans that declare the possibility of self-determination, co-creation, imagination and aspirations.

Out of the experience gained, participants produced some materials, which were presented at the final exhibition “I am where I am fine” mimicking an anthropological museum. Inside of the show the collecting masks, costumes, the drawings of the mutations and the village were exhibited. Participants also produced two beautiful booklets which help to understand the show. It is a glimpse at the different functions of the houses and the village, and some bits of the mutant characteristics. Group also had experience of cyanotype, and some prints were also presented. Another object produced was a fun zine, a sort of hyper collage which came from many people during the residency and which was shown as a free diary at the exhibition. The group also produced two postcards and four outdoor PVC banners with claims and images of Pidzamche. Banners were shown as external exposition: one was on the tower of Jam Factory Art Center, two on the public library, and one in the courtyard of the AIR Space. Later we developed the idea of story-telling and recycled all PVC banners into awesome bags and cases, hence giving the powerful energy and emotions of “I am where I am fine” project to charge a wider range of people. One of the priorities of Jam Factory Art Center is an ecological approach so we try to use all materials as long as possible.

Local media artist from Lviv, Serhiy Petlyuk became very much familiar with Pidzamche district during his previous projects with children here. Three years before the “I am where I am fine” project, together with Jam Factory Art Center, he conducted a workshop “Dreams of Pidzamche” involving local children. One participant of that project brought her dreams to the “I am where I am fine” workshop and in this way physically connected these two processes.

The main idea of the Serhiy’s workshop, on the one hand, was an attempt to acquaint the teenagers with the manifold contemporary art form – media art – and tell about its birth, history and multiple types, while, on the other hand, talk and work through the concept of their ideal city for life.

As a result of discussions and stories based on participants’ experiences, they singled out several themes to elaborate, discuss and visualize that became the basis for their collective video installation “My ideal city. My ideal home”, which was presented at the final exhibition at AIR Space. Among these themes you may find garbage in the city, planting of greenery, public transport, pollution, the concept of culture in a broad sense of the word, preservation of architectural and historical heritage, etc.

This video installation is not the main purpose of the workshop, as it is essentially a secondary result of the collective work, dialogues, debates, experience-sharing and conversations about the things that need to be changed in the city and in ourselves to live a more comfortable and pleasant life.

Iryna Ruzina, another local artist from Kyiv, who uses performance, voice and body practices, focused her research on how the young people integrate themselves in society, and how a question of their boundaries becomes topical.

During the four days of Iryna’s workshop participants explored themselves and their bodies in action to feel how they appropriate new territories with the help of the latter. How they manifest their identity, their right for presence in urban space in contact with the public property. Participants groped for the boundaries to discover their flexibility and learn to find a compromise when the boundaries were rigid. Through movement and interactive games, they explored a point of transition from the observer to the observed, worked with attention and concentration. Additionally, they tried to communicate within and out of the space limits, also focusing on the local residents as the representatives of Space and Time. They discussed the meaning and the links with the public space, tried to communicate with the city as a single substance and feel the nature of their relationship with the city and their place within it.

Resulting group performance “My boundaries” was presented by participants and artist at the final exhibition. Performers were interacting with visitors as well as with themselves.

All artists were asked to practice critical thinking with participants. Within the performance workshop, artist Iryna Ruzina’s practice was aimed at rethinking the internal (mental) and physical borders; within the media art workshop of Serhiy Petlyuk teenagers used discussions about esthetic of public places (balconies, graffities, etc.), (un)comfort of public transport and so on.

Workshops with adults and teenagers by Jacopo Natoli and Guendalina Salini involved participants through the art therapy practice triggering the memory, uniting people and opening one to each other. Participants shared their dreams and recent memories, some family stories. Collecting the reflections and feedbacks of participants and artists we in Jam Factory Art Center gather memories and share them to resist amnesia, and to have the opportunity at any moment of life to come to the place where one feels fine.