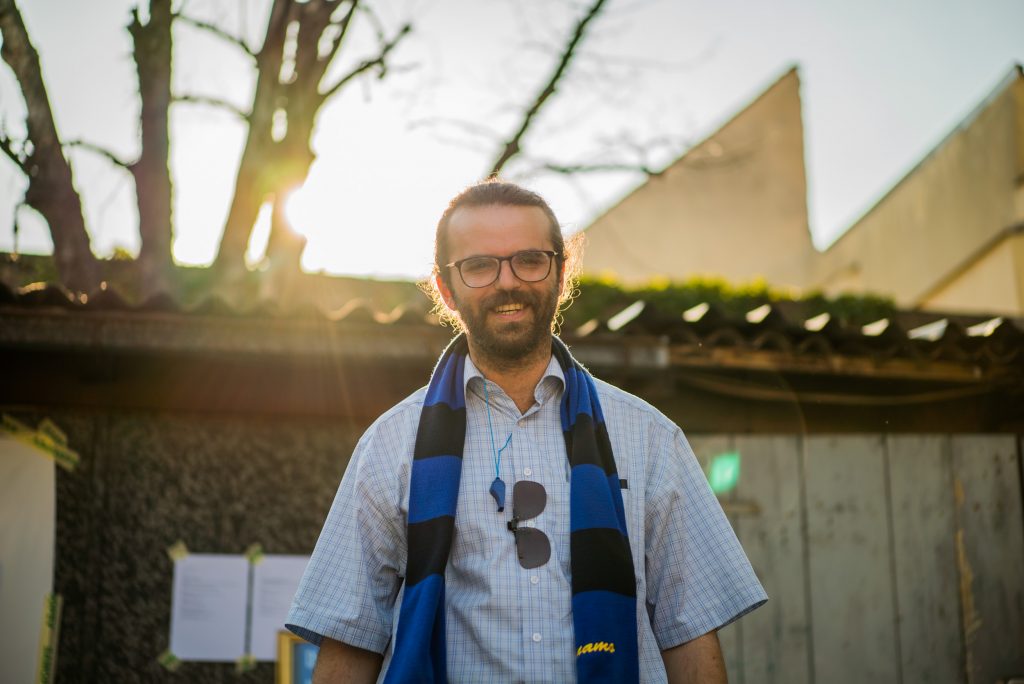 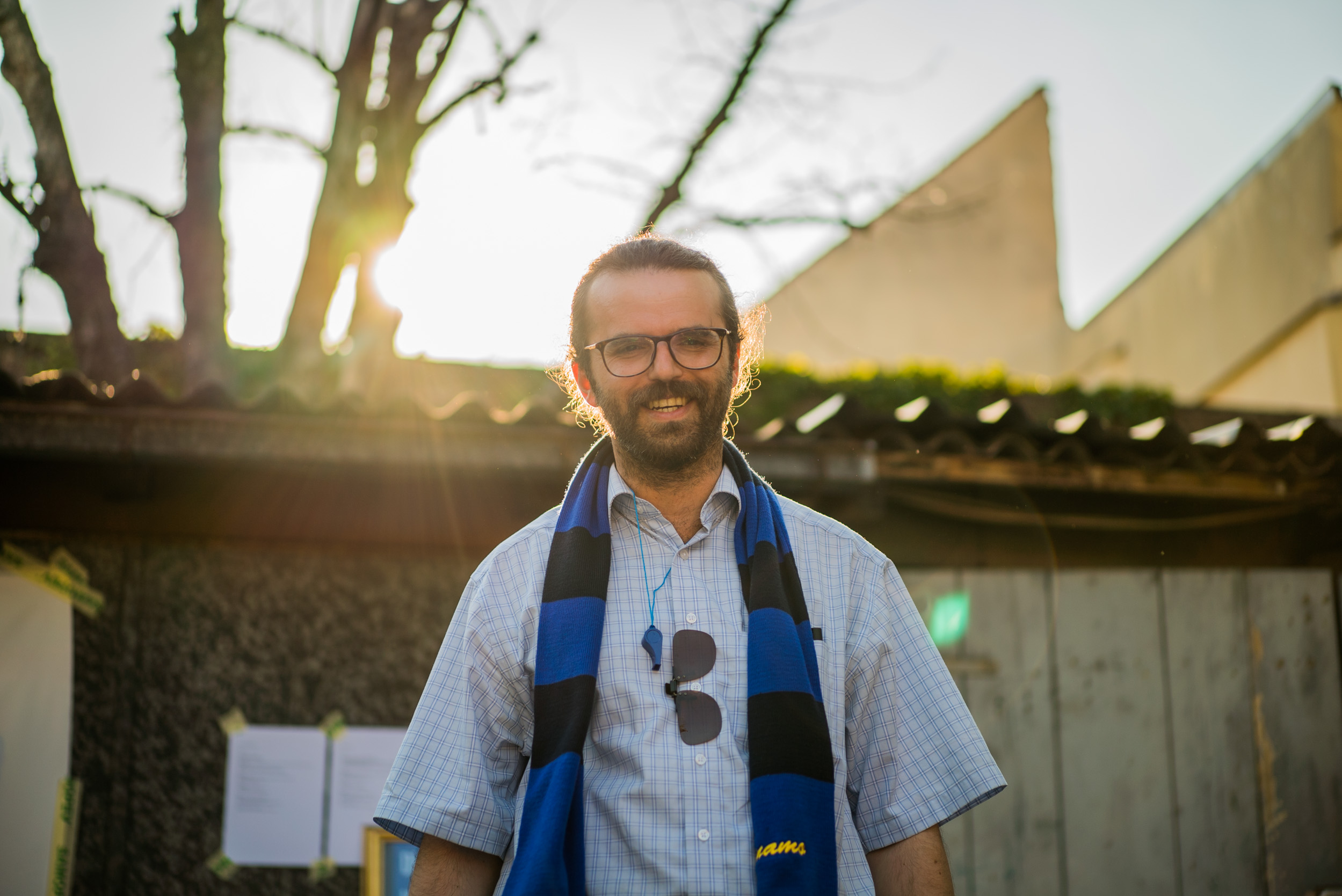 LAB 852 tackles serious questions and on a large scale, as well. Its program of Superorganism is a realization of workshops and art residencies in the framework of MagiC Carpets project, in collaboration with local artists, art pedagogues, and children, its concept built around the idea of Superorganism and the community of the courtyard of Ilica 37. Through the Imaginarium of Superorganism, they observed the problems of alienation as well as the techniques of positive transformation of collective processes, using it as a metaphor for the balance between individual and collective, male and female, spiritual and material, culture, and nature. Matthias Krinzinger was one of two artists-in-residence who addressed this topic in a unique and playful manner.

Matthias Krinzinger (b. 1982 in Innsbruck, Austria) studied Sculpture and Media Art under Erwin Wurm at the University of Applied Arts Vienna and graduated in 2012 under Martin Walde. In addition to participations in national and international exhibitions, Krinzinger manages and organizes exhibitions. He is co-founder of the artspace “Pferd” in Vienna. Social interactions, the use of familiar objects and the staging of everyday situations are the focus of his interest.

Matthias’s approach rests on the observed specificities of the moments and the interactions that artistic interventions can cause, with his interest lying in creating events for the wider audiences, using games as a connective device. Starting with the focus on the Bad Blue Boys football fan group that is based in the courtyard, mostly composed of young men from 18 to 15 years of age single-mindedly dedicated to Dinamo football club, Matthias has been examining human reactions to the games he has presented them, through a series of happenings. It culminated in an interactive installation Dinamo always wins (and loses), which aimed to detach from the conflict with the external and point out the nature of the internal turmoil. The setting of different events Matthias developed during the residency had a set of rules, in a sense, he adhered to: the analogue approach in terms of manner of communication (e.g. as seen in potato-printed invitations or exclusively oral invitations for the events), the self-sufficiency, the deep understanding of how humans react in given situations, the artistic events as a happening moderated by the artist, but realized by the communication and the momentary social impulse.

During his residency, Matthias collaborated with This Town Needs Posters, a duo of rogue architects working with the media of analog printing in creating artistic and promotional posters. Alongside them, he created the blue promotional posters for the Dinamo always wins event, that were put all over Zagreb before the event. Along with that, he realized a number of fruitful smaller-scale collaborations with a handful of artists throughout three independent events.

The first event that took place during the residency was a happening Heavymetal / Leichtmetall, a  gathering with beer, fire and listening to heavy metal music. During the event, the empty beer cans were being thrown, as the audience finished with its content, into the fire and as they melted they were poured in the moulds made on the spot and transformed into art objects that witness the event that had transpired. While the final object and its creation represented the highlight of the event, the emphasis was put on the subtle social processes happening under the influence of moderated happening (and beer) on the side and all around the burning fire and melting aluminium.

The event touched the existence of the former cult metal record store, whose light sign still ornaments the courtyard and is still remembered by many that frequented the scene. In this event, Matthias introduced the potato-printed invitations with the silver skull, which were distributed (somewhat randomly) to persons he met during his stay and different gatherings he visited.

The second event taking place at the second part of the residency, in spirit much like Heavymetal, was  Lucky 7: the bank always loses, a highly illegal and exclusive black-tie event, organized as a garage gambling site where the house always loses. In collaboration with the Goran, the keymaker from the courtyard (also known as Gogo), Matthias produced a postbox with seven keys, from which the only one could open the postbox. The potato-printed gilded invitations were distributed in limited numbers, and the word of the exhibition only travelled from ear to ear, with no media releases or social media events. With the set of rules distributed before (black tie obligatory) and during the performance, Matthias moderated the dynamics of the performance, involving the audiences in one on one interaction, at the same time creating the atmosphere of anticipation and presence in the ongoing process. The similar principles adhered during the Superorganism exhibition, held at the end of the residency, with the happening Dinamo always wins (and loses), that was put in the context of a table football tournament, with the flow of the audiences and award-giving were dynamized by the artist. During the two hours of an active happening (tournament), the applicants were included in one on one tournament of table football in which all the figures were tinted Dinamo blue blurring the importance of the winning (and losing) party, which, alongside the award being given to both losers and winners caused the detachment of the usual fixation on winning and emphasized the game, the laughter, and involvement of the ball rolling around the green surface.

In the end, or perhaps the beginning, the process remains a reflection on the transformational ability of the game to call for social action, and awareness of how human desire for the playing, as well as the focus on creativity, can be triggers of mental health of the organism we are a vital part of.