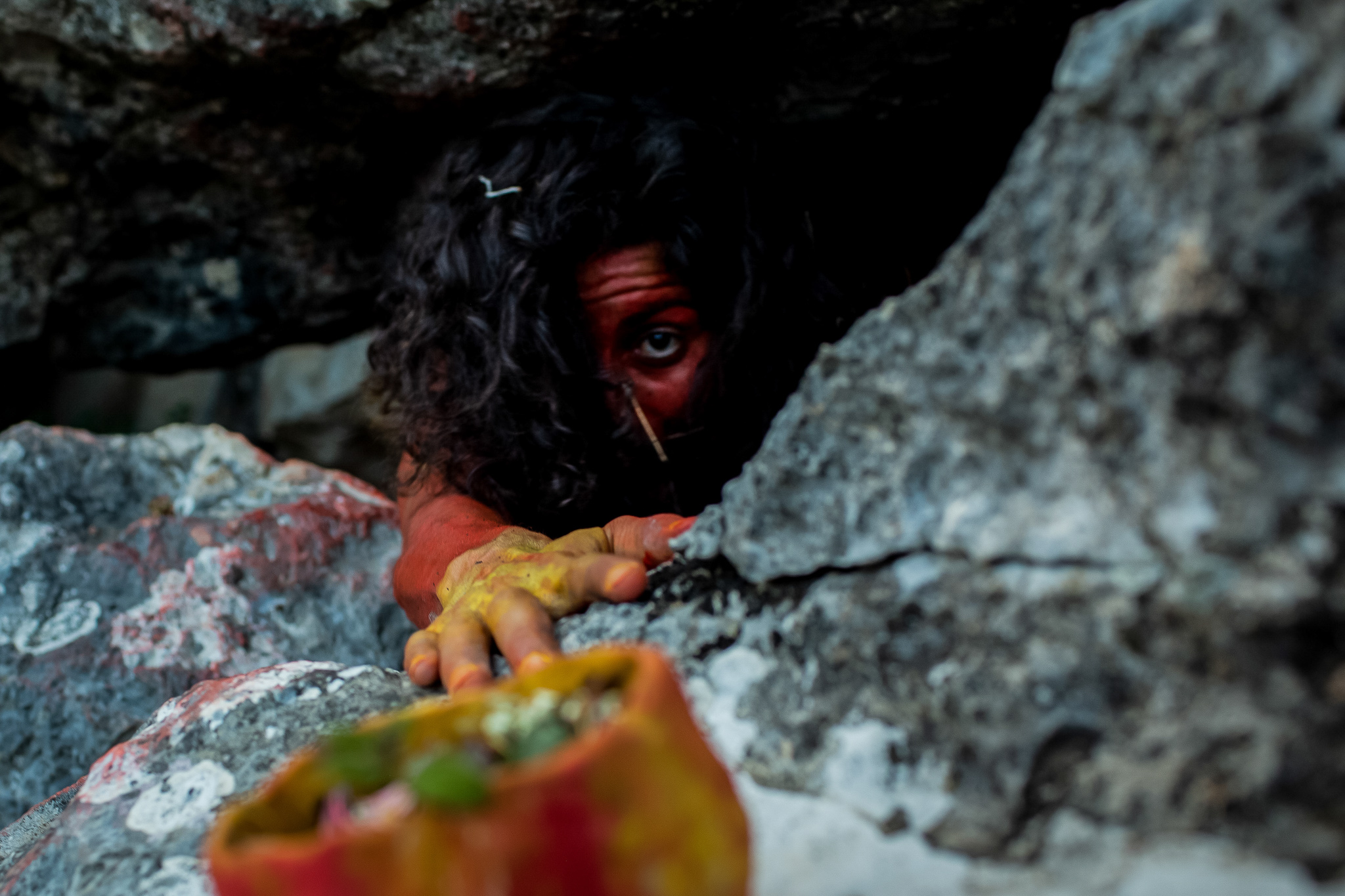 It all started from an article in a regional newspaper, announcing that the Neolithic site Grapčeva Cave was sold to a private investor. It is the second largest archaeological site from the Neolithic period in Croatia. Artefacts found on the site include ceramic pottery used for rituals, with different sketches on it, such as the one of the ships dating from 3000 BC.

Since at a similar time, preparations were taking place for Etno Hvar Festival at Humac, a little abandoned village at the top of the Island Hvar, 30-minute walking distance away from the cave, the community was very worried about the future of the site. Therefore, Paulina Almeida was invited to do the research about the issue and approach it in her own way. Metaphoric connections between the subject of MagiC Carpets project were quite obvious – ship as the symbol of the journey, abandoned village as the symbol of migrations, and above it all, there was a question of ownership of a “public” space and cultural heritage connected to it.

Paulina Almeida creates in the public spaces since 1997, in Europe, America, Asia and Africa. She is a director, programmer, curator researcher, instructor, producer and performer. Paulina’s artistic work focuses on the specific social political site and is based on the concepts of “useful or participative art”, so as the educational character of art in public space. She currently works as an artistic director, consultant, curator and programmer for Porto, Águeda and Aveiro municipal councils, directs national and international performances, creating a unique and authentic experience for the audience, so needless to say, her practice and talents were perfectly suitable for the situation at hand.

The topic selected as the core of the festival was that of the second home. It is weaved around the connection between the history of the old shepherd settlement of Humac and Grapčeva cave with the problematic of touristic gentrification and concepts of artistic nomadism, migrations and temporary residence.

Paulina’s course of work consisted of two strands: to work with children on the subject, using the symbols and objects found at the site, in order to develop capacities to position themselves between the distant past and imaginative futures and realize their power to create new realities in the present. It included 2 two-day workshops with children of elementary school (50) about rethinking their past and imagining their future and co-creating the Book of Future to be presented in the exhibition (sound & objects) and kept in the library for the permanent access of the local public.

The second part involved work with Jakov Rubinić and Assosiation Humac on innovative interpretation tools for the walk he is usually doing for tourists between Humac Village and Grapčeva Cave, in order to experience collaboration with contemporary artist and experiment with sustainable tourism formats, and thus she developed Immortelle, an ancient futuristic walk (performance). The performances took place during the Etno Hvar Festival at the beginning of July.

According to the description, it was “a fictional tour guide performance journey to the historical site of Humac and its surroundings. It [brought] together myths and real stories from the past Neolithic era into the future. The local descendent and the visionaries of our times. A fusion between the history keepers the local ethnographic research and local children’s invented creation, whom [were] basing the ground for future. The journey [began] with a shepherd taking his goats into a magical voyage to the past, where anything [could] happen.”

Mixing fantasy with inventiveness, the tour featured, a church bell concert, spider-net fabric installations, dances, performance inside the cave, dinner, sharing experiences and so many other things that we do not want to reveal, expecting that the readers will visit Hvar and experience its primordial magic themselves.

Both works were interconnected and inspiring each other: children’s voices and images gave valuable feedback to cultural institutions and tourism operators about their perception of cultural heritage and history, development and future, Jakov Rubinić and Association Humac have provided sparks to their imagination with stories about life of their ancestors, Paulina Almeida was mediating between traditional and contemporary with the use of co-creative and interdisciplinary approach.

Paulina also recorded her experiences in a blog Bring Back Home, available today to witness her journey and creative process on the island.