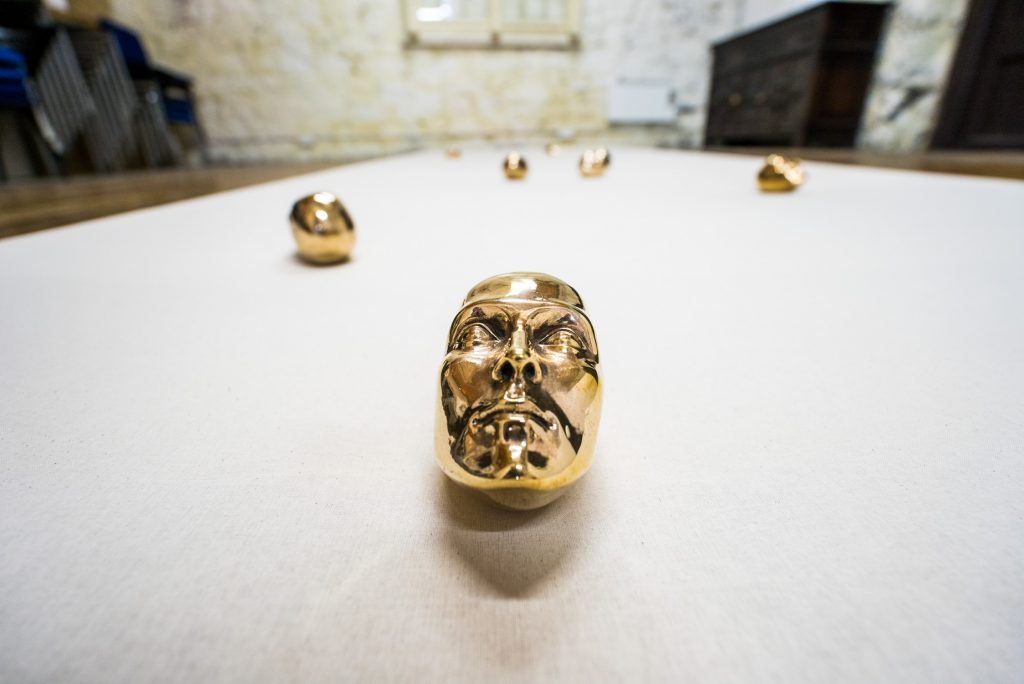 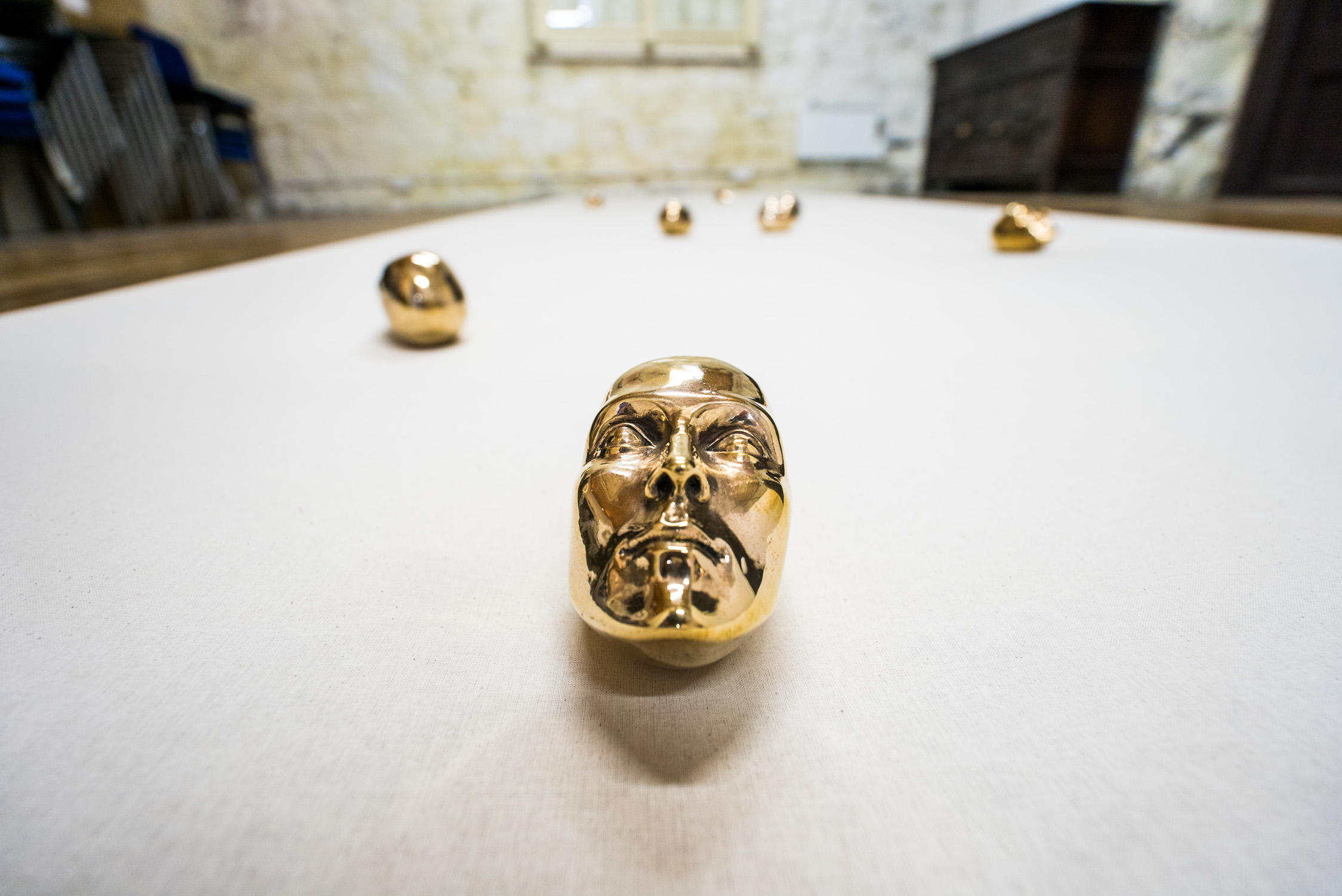 HEADS and HEAD TO THE FLOOR

There are certain works that tells us so much more, because they combine different disciplines and thus open different dimensions for us to see and understand their meaning. MagiC Carpets can offer a glimpse into such a creative process developed in Ireland by our emerging artist who spent a month there.

During her residency, Portuguese artist Vera Mota worked on a sculpture installation consisting of 5m x 2m canvas placed on the floor and several small heads made of bronze (about the size of an orange). These heavy metal heads placed on the fabric generated a depression on this material sinking and creating a small well. The materials contrast, as the bronze is hard and shiny, and the fabric is flexibleand bland.

The key to understanding Vera’s work lies in the fact that she develops work in the areas of performance, sculpture and drawing, employing minimalist principles and common traits that point to the conflict between the will to order and a fascination by error and accident.

Moreover, she tries to pay special attention to the economy of presence, effort and action, seeking to create new spaces for objects through the composition. By the means of simple action, she highlights the physical qualities of the materials, carefully chosen due to their specificities and characteristics that determine the production of her work.

Vera’s work, which often questions the conflict-conditions that govern the relationships of verticality and horizontality, is always affected by the dimension of performance, albeit sometimes implicit and non-literal, whether due to the way that one senses the presence of a determined object or due to its suggested possible use.

As another integral part of her work, Vera also developed a performative work, where again the head is brought against the floor, this time through an exercise that requires effort, around a green flat rectangle canvas placed on the floor. This rectangle works as a chrome key like screen where all surfaces or realities could materialize virtually. The body moves trying to bring the head against the floor while going around the perimeter of the rectangle.

Having a month to work in Limerick, Vera started planning her work even before arriving to Ireland. Knowing that the time would go fast, she tried to focus on some ideas she would explore there and continue exploring the representation of the figure, the body, in both a performative and a sculptural approach, so she committed herself to a daily performative practice, in a free way, that could possibly lead to the final performance.

Having arrived at Limerick, Vera searched for materials and workshops for different materials. She started making drawings and after find a great foundry in Dublin, she decided to develop a group of small pieces in bronze. Those pieces ended up being heads, self-portraits, that would behave like ordinary objects, almost stones, detaching from the traditional privileged position of the head.

In parallel she started painting green chroma-key monochrome canvas, working on it like a daily exercise, like going for a run, for a week she would add continuously layer after layer of paint.

During her final week, she focused on the installation of the heads, and a performative intervention. After some experiments with other possibilities, she decided to build a large structure, similar to a big canvas, that would be placed on the floor and would hold the heads. Next, she installed the green canvas on the floor also, levelling the two elements. In the final presentation she added a performative moment moving around the green canvas.

During her stay, Vera interacted with the community, and visited as much museums, galleries, school of arts as possible. She also initiated a talk in EVA International, in which the artist presented her work and offered the possibilities of exploring some performative exercises too.

According to Vera, it was a very enriching experience in many ways, starting from the necessity of developing an agility and focus, not to waste time and being able to work in small frame of time. The contact with the team of Limerick Biennial was absolutely determinant and productive, getting to know more of the city, to move around places to find materials and to trigger discussion and deepening her work.