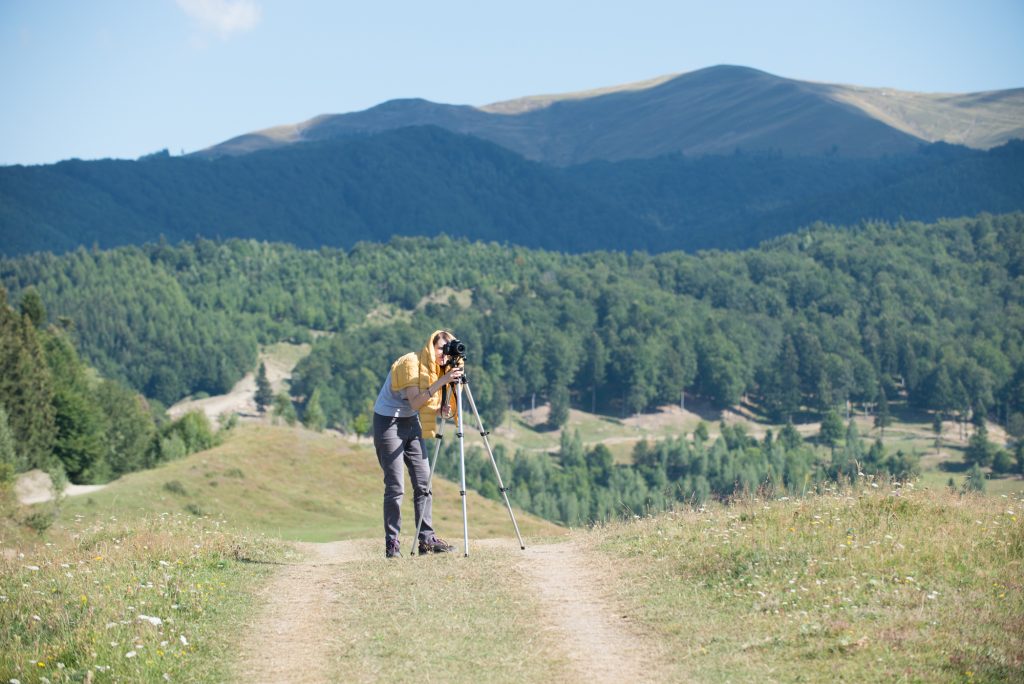 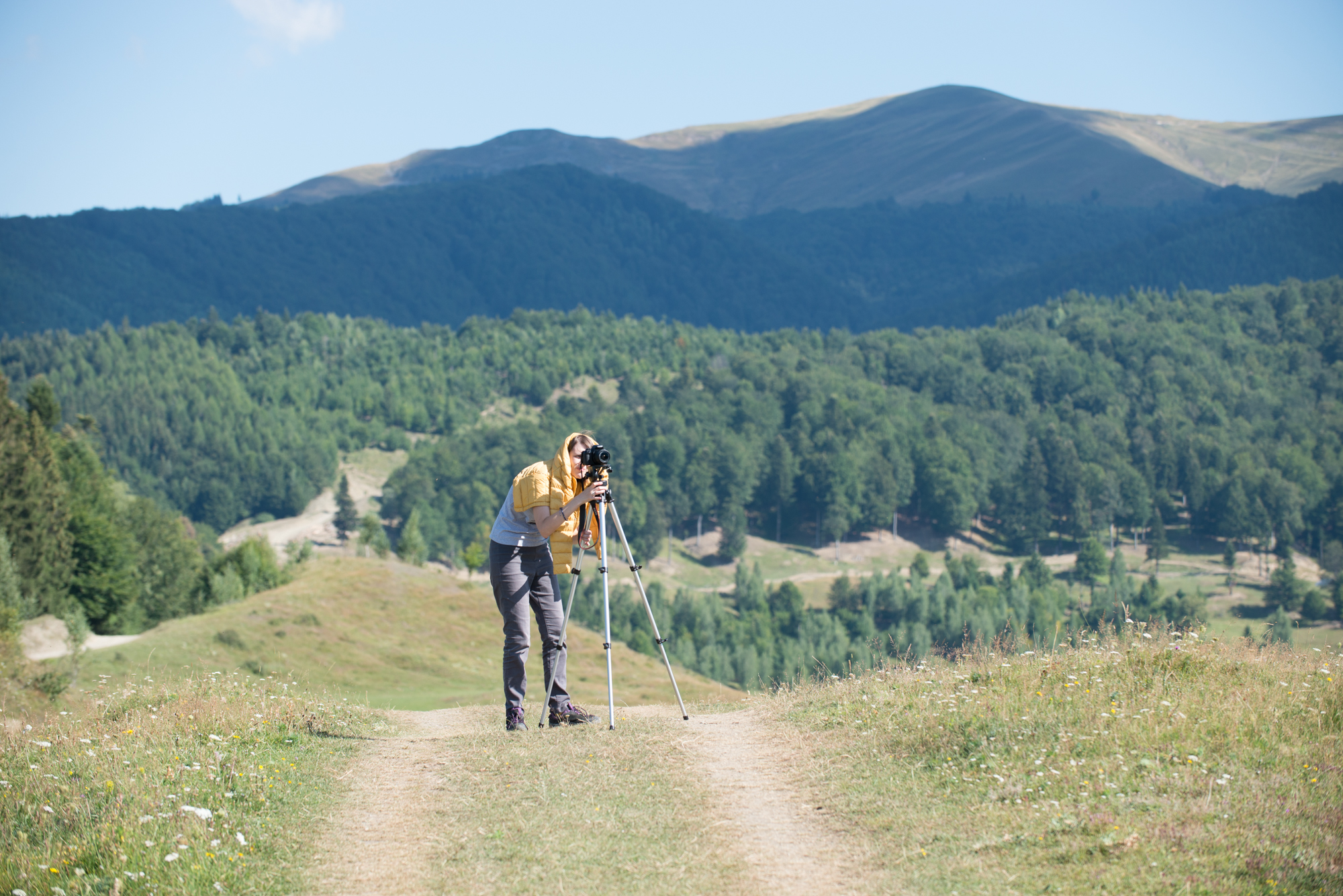 META Cultural Foundation organizes the fifth edition of the audiovisual creative residency from Slon (Cerașu commune, Prahova county), within the MagiC Carpets project, from August 10th, 2022 to August 25th, 2022. The curator of the project, Raluca-Elena Doroftei, has selected for this year’s edition 3 artists: Alina Manolache (RO), Toni Mijač (HR), and Sebastian Moldovan (RO). The purpose of the artistic residency at Slon is to support the synchronization of the Romanian cultural environment with the main trends in international contemporary art and to facilitate the dialogue between local and foreign artists. The village of Slon and its surroundings, with everything that means its history, tradition, nature and local community creative potential, becomes the subject of research and inspiration in the projects of the artists invited here during the residency. This year’s edition aims to continue this approach, integrated into a European project, a platform that brings together artistic residencies, organized by international partners, dedicated to 15 other local communities from all over Europe. 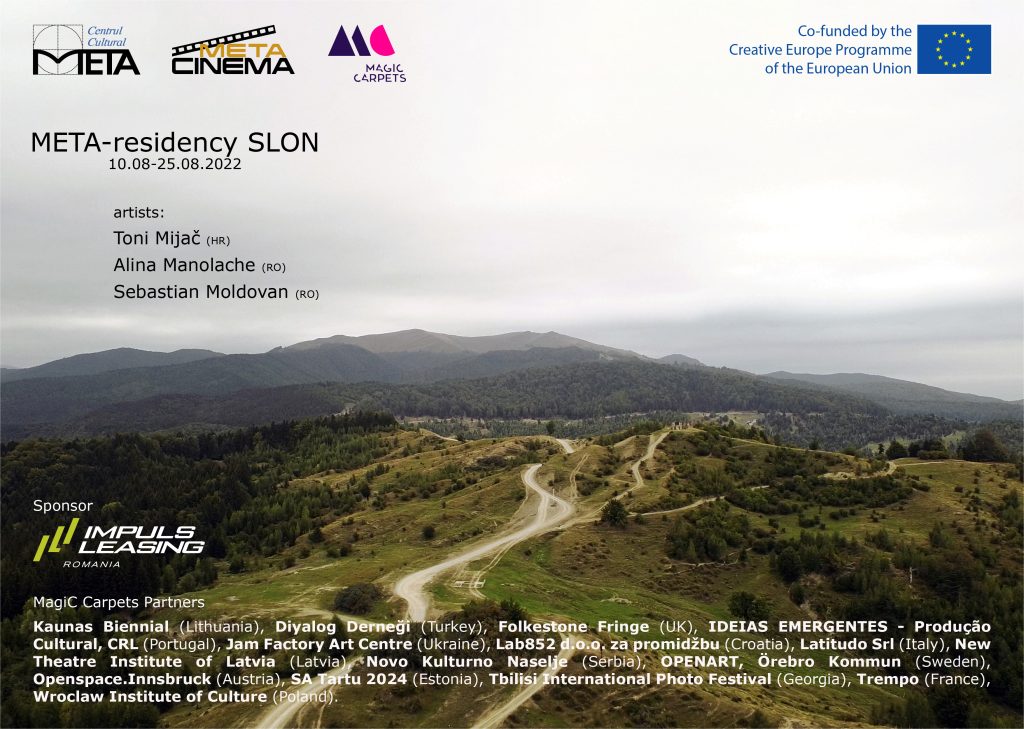 Alina MANOLACHE (b. 1990) is a Romanian filmmaker. Her practice stands at the intersection between documentary cinema, artistic research and education. Featured by ”Filmmaker Magazine” as one of the top 5 female directors of IDFA (International Documentary Filmfestival Amsterdam) 2020, Manolache is an alumna of Visions du Réel (Nyon, Switzerland), IDFA (Amsterdam, Netherlands), CPH:DOX (Copenhagen, Denmark), Jihlava (Jihlava, Czech Republic), Dokufest (Prizren, Kosovo) and other prestigious festivals around the globe. She has authored several acclaimed shorts and one feature length documentary (”Lost Kids On the Beach”), as well as commissioned webdocs for ”VICE” and ”The Guardian”. She has served on international juries (CPH:DOX, Mons Film Festival, among others) and she has been actively contributing as a mentor and guest lecturer at documentary workshops and in academia. Alina Manolache holds a Bachelor’s in Photography & Video by the Bucharest University of Fine Arts and a Master’s in Society & Media Studies. She is a graduate of Archidoc, Aristoteles Workshop, Sarajevo Talent Campus and IDFAcademy, among others. Between 2012-2014, she lived and worked in France. First in Grenoble, as a scholar of École Supérieure d’Art et Design, then in Paris, as an artist-in-residence with a project at Centre Pompidou. Her filmography consists of exploratory, choral films that investigate identity, belonging and shared experiences. So far, she has navigated topics like post-communist generations (Lost Kids on the Beach, IDFA 2020), surveillance (I AM HERE, Jihlava 2020), space exploration (2020: A Covid Space Odyssey, The Guardian 2020), youth (End of Summer, Visions du Reel 2016), museums (Your Visit Starts Here, Centre Pompidou 2015), human-machine relationships (3 Dialogues About the Future, in production). Her work has been reviewed by The Guardian, Filmmaker, The Calvert Journal, VICE, Aeon, POV and more. Currently, Alina Manolache lives in Romania, but her research-based film projects – as well as her activity as a mentor – take her to different parts of the world.

Toni MIJAČ (b. 1988) is an artist and film director; he lives and works in Zagreb, Croatia. In his work, Toni Mijač explores the impulses of everyday life, analyzing the use of language, memory, interpretation and other phenomena through various media (photography, film, video, text, installation) and strategies (manipulation, resemanticization, play with syntax). Behavior, dynamics, memory, rhythm and reaction are recurring interests in his works, and the aspects highlighted by them are starting impulses in his research. Attentive to the types of communication, body language or intensities of the different routines and norms that form a chosen area of ​​interest, he collects the traces and details that later serve as working material in different stages of his projects. He experiments with the language of new media to explore ways in which he can get in touch with the viewer, and one of the tools used in carrying out his work is collaboration. He has realized conceptual, cinematographic and commercial projects, also having experience as a collaborator or leader in local and international workshops and festivals. For 6 years (2009-2015), he initiated and organized children’s film workshops, entitled ”Communication through film”, held in several high schools and the Cinema Club in Split. He holds a bachelor’s degree in film and video from the Academy of Arts in Split and a master’s degree in new media from the Academy of Fine Arts in Zagreb.

Sebastian MOLDOVAN (b. 1982), graduate of the University of Arts and Design in Cluj-Napoca, Painting department. He uses, one by one, any available medium of artistic expression available – installation, video, sound, drawing, being often attracted by minimalism, arte povera, ready-made and site-specific interventions. He uses different mediums depending on the space or on the situation out of the need to interact with them, something that painting could not provide because of the status of a finite, bounded object. His artworks have been exhibited and presented at the Museum of Recent Art (Bucharest, Romania), Art Encounters Biennial (Timișoara, Romania), Guangdong Times Museum (Guangzhou, China), Galerie Jan Dhaese (Gent, Belgium), New Gallery of IRCCU – Venice Biennale 55 (Venice, Italy), Brukenthal National Museum – Contemporary Art Gallery (Sibiu, Romania). In Romania, Sebastian Moldovan is represented by Galeria Gaep in Bucharest, where he participated in various personal and group exhibitions: “The Domino Effect 2” (2021, group exhibition), “Spacetime’s a Wastin'” (2021, personal exhibition), “The Domino Effect’ (2020, group exhibition), “The Uncanny Within” (2017, solo exhibition) and “You Never Know What’s Off” (2015, solo exhibition). Originally from Baia Mare, he lived and worked periodically in various places in the country – Cluj, Bucharest, Sibiu, Baia Mare, the countryside of Sibiu and Sălaj, currently settling in Bucharest. Often living in small towns and villages, he is familiar with this environment, with its concerns and orientations, keeping a connection with the rhythm of these places, of the common man and the majority. He is thus looking for a binder/ a bridge/ a representation for the cold conceptualism, often found in his art. In his artworks, Sebastian Moldovan talks about the frustration produced by disparities and abuses of power, retrograde tendencies, corruption, grabs in a world difficult to define between aggressive capitalism and the inertia of the old power structures proposing opposite or excessive realities. To some extent, he turns his gaze away from immediate human reality and finds refuge and inspiration in the world of plants, natural phenomena, mechanisms. If at first the artworks were minimalistic, perhaps as a reaction to the attempt to approach painting, now they evolve towards using the mechanisms of the surrounding world – overloading the senses, exaggeration, noise, violence. There is a tendency to reintegrate drawing, either through itself or through video and three-dimensional installations.

In Romania, MagiC Carpets project is organised by META Cultural Foundation through META Cinema since 2018 and during the four years of project has annually organised audiovisual creation META-residencies in Slon, Cerașu commune, Prahova county. Following the proposals of the other 14 emerging curators appointed by the partner institutions, Raluca-Elena Doroftei, the curator invited by META to join the project since the first edition, has selected for the previous 4 editions of the project 13 artists from Serbia, the Czech Republic, Latvia, Portugal, Croatia, Ukraine and Romania: 1st edition, 2018 – Larisa Crunțeanu (Romania), Vojin Ivkov (Serbia), Michal Kindernay (Czech Republic); 2nd edition, 2019 – Vlad Dinu, Daniel Djamo (Romania), Luisa Sequeira (Portugal), Marta Elīna Martinsone (Latvia), 3rd edition, 2020 – Mihai Gavril Dragolea, Ana Țaran (Romania), Toni Mijač (Croatia), 4th edition, 2021 – Patric Pavel, Mihai Smeu (Romania), Anna Zvyagintseva (Ukraine). At the end of the four-year project, 15 video artworks were created in the Slon residency through MagiC Carpets, which every year benefit from the opportunity to be included in the selections of META Cinema programs, to be promoted, entered and selected in competitions national and international.

2 artists and an artistic group from Romania, recommended by the META Cultural Foundation, were selected to participate in international residencies within the MagiC Carpets project: Daniela Palimariu in residence in Innsbruck, Austria (in 2018), Odeta Catană in Riga, Latvia (in 2019) and Anca Benera & Arnold Estefan in Limerick, Ireland (in 2019).

You can find out more about the residency on Meta Cultural Foundation website here.